Why they're picking on public workers 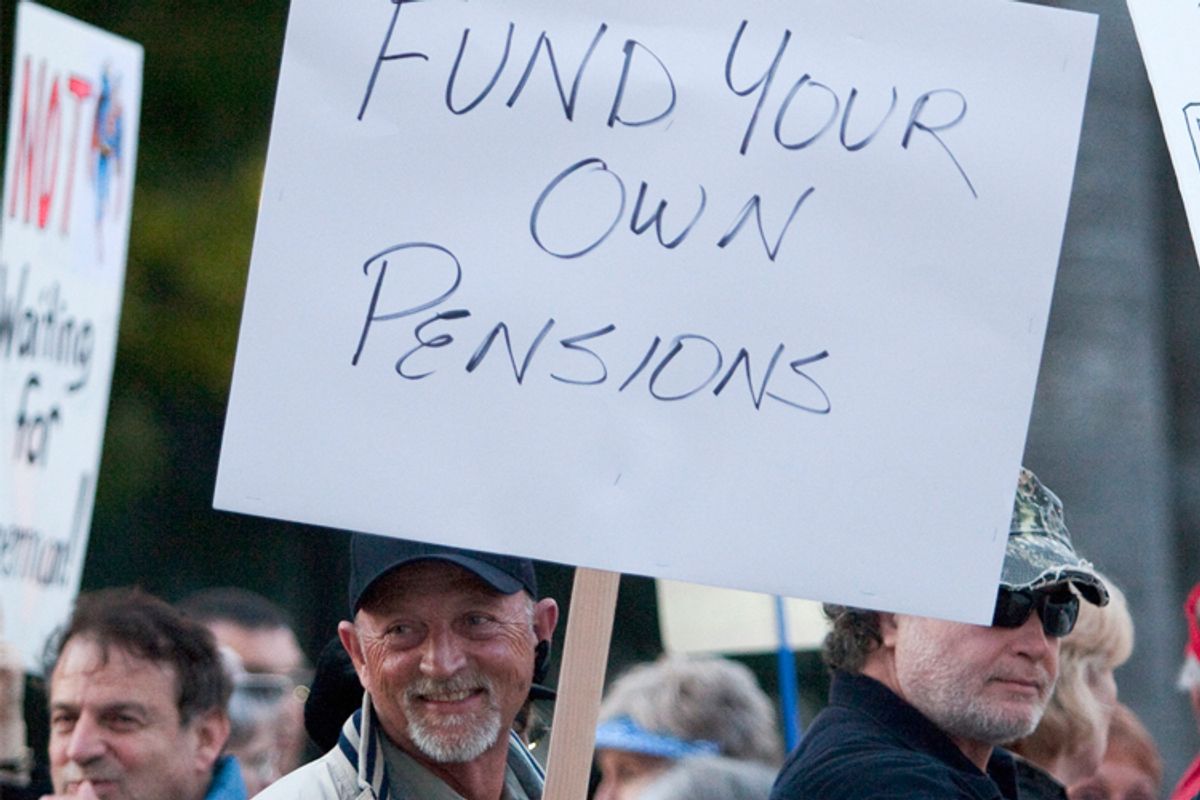 Under ordinary circumstances, few would dispute that when a nation turns against its educators and reviles scientists as "elitists," it's headed downhill. Not to mention when it attacks working stiffs who drive ambulances, inspect bridges and natural gas wells, maintain sewers and water lines, put out fires, and respond to 911 calls when the sound of breaking glass is heard at 3 a.m.

Normally, President Obama's remarks to the National Association of Governors would be considered political boilerplate. "I don't think it does anybody any good," he said, "when public employees are denigrated or vilified or their rights are infringed upon. We need to attract the best and the brightest to public service. These times demand it. We're not going to attract the best teachers for our kids, for example, if they only make a fraction of what other professionals make. We're not going to convince the bravest Americans to put their lives on the line as police officers or firefighters if we don't properly reward that bravery."

Even if they don't often think about it, most people do understand that government employees do much of the basic grunt work that keeps a civilized society functioning. Think of it this way: Every hedge fund manager, investment banker, oil industry lobbyist and political consultant in the USA could be raptured to that great Republican country club in the sky to spend eternity golfing with Speaker John Boehner and the brothers Koch, and weeks might pass before anybody noticed.

Newspaper columnists, too. There's raw sewage in your basement? Well, don't call me. Chances are I'm messing with horses or reading a Robert B. Parker mystery with my phone shut off. Paul Krugman's pondering Iceland's inflation rate; George Will's selecting a canape or watching a ballgame. Sorry.

None of us is keen to take on a class of 35 9-year-olds, either -- let alone, heaven forbid, teenagers. Try some lazy, overpaid, unionized government worker.

Circumstances, however, are hardly normal. Emboldened by its success in 2010 elections, the Republican right appears to think that breaking government unions and sabotaging the nation's fragile economic recovery by putting hundreds of thousands of public employees out of work may advance their enduring dream of returning America to the Gilded Age -- an era of take-it-or-leave-it labor relations and 300-pound GOP presidents.

In those halcyon days, an innovator like Wisconsin Gov. Scott Walker could simply order pesky demonstrators arrested by state cops or beaten by Pinkertons. His plutocratic benefactors at Koch Industries not only would pay no income taxes, but their companies could dump all the toxic waste or polluted wastewater they wanted anyplace convenient without interference from meddling government bureaucrats.

Must Democrats hire a skywriter for people to get it? Here's a joke making the rounds on Facebook: Sitting at the negotiating table are David Koch (the Scrooge McDuck impersonator Gov. Walker thought he was talking to on the phone), a Wisconsin teacher, and a Tea Party member. A waiter brings them a dozen cookies. Koch takes 11, then warns the Tea Partyer, "Hey, better watch that guy. He wants half your cookie!"

"Monday night I had all of my cabinet over to the residence for dinner. ... We'd already kind of built plans up, but it was kind of the last hurrah before we dropped the bomb. And I stood up and I pulled out a picture of Ronald Reagan, and I said, you know, this may seem a little melodramatic, but 30 years ago, Ronald Reagan ... had one of the most defining moments of his political career."

The reference is to Reagan's firing of striking air traffic controllers, which in Walker's mind somehow brought down the Soviet Union. The "bomb," of course, is the governor's excellent plan to annul Wisconsin's half-century-old collective-bargaining agreement under the phony pretext of deficit reduction. In reality, the unions had already agreed to budget-balancing salary cuts -- as they'd done under the previous Democratic administration.

As usual, the national media has all but unanimously framed its narrative to favor Walker's misrepresentations. For example, union members already fund 100 percent of their pensions and healthcare, generally trading lower wages for security. It's all in the contract. Private corporations simply report employee benefits differently for tax reasons.

Even so, the electorate may be catching on. A New York Times poll shows respondents favoring higher taxes over public employee pay cuts by 40 to 22 percent. People oppose busting public unions almost 2-to-1 -- 60 to 33 percent. Several surveys have produced similar numbers.

And who knows? Seeing workers fight for their rights may embolden President Obama, too. Stranger things have happened.