New Zealand rescuers give up search for quake survivors

Nine days after the earthquake struck Christchurch, rescuers believe no one could still be alive under the rubble 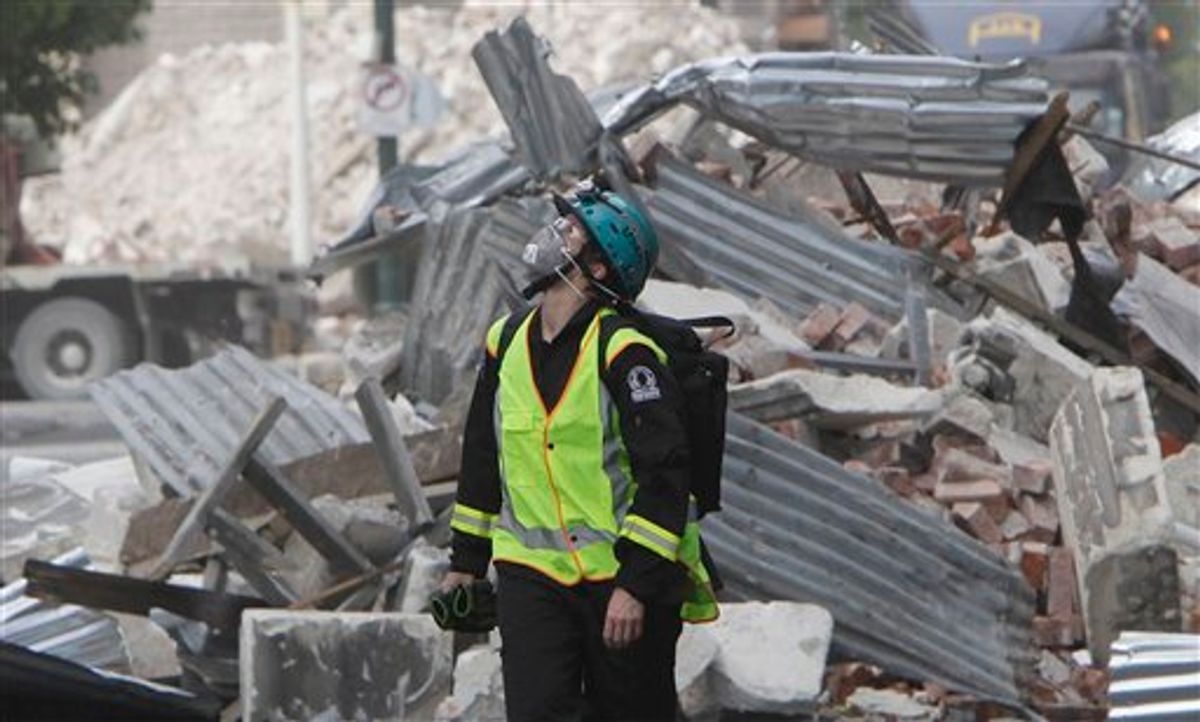 A New Zealand Urban Search and Rescue worker walks through the central business district during a search of earthquake damaged buildings in Christchurch, New Zealand, Wednesday, March 2, 2011. Police said the death toll from the quake had reached 158 and was expected to rise further following the Feb. 22. 2011, 6.3 magnitude temblor. Around 200 people are listed as missing. (AP Photo/Mark Baker, Pool) (AP)
--

Rescuers officially gave up hope of finding more survivors of New Zealand's devastating earthquake, saying Thursday that no one trapped in rubble when the disaster struck nine days earlier could still be alive.

The news was a blow to the families of around 200 people listed as missing, many of whom clung to faltering hope for good news despite more than a week of silence from beneath the piles of debris that still litter the city of Christchurch.

"We now face the reality that there is no chance that anyone could have survived this long," Civil Defense Emergency Management national controller John Hamilton told a news conference Thursday.

"Sadly, there becomes a point where the response effort shifts in focus from rescue to body recovery," he said. "We have now reached that point."

Rescuers have pulled 161 bodies from the rubble, but the vast majority have not yet been identified, and dozens more dead are thought to still be trapped, leaving hundreds of families in anguish. Officials warn the toll could be as high as 240.

Linda Amantillo, the mother of a Filipino nurse who got trapped in the rubble of the Canterbury Television building, pleaded with officials not to stop the search.

"It pained me when I heard that they've stopped searching," Amantillo said, her voice cracking. "I've never left the altar praying for a miracle."

Her 23-year-old Louise managed to briefly call and send text messages to her parents in the central Philippines shortly after the quake, saying she got buried and asking them to direct rescuers to her. She stopped sending messages after more than two hours.

Maurice Gardiner, whose sister was thought to be inside an office block that collapsed, said he accepted the official decision but that he had not given up all hope.

"Obviously I would like my sister back with us -- at this stage it's not to be," he said. "They've said that miracles can happen, so I'm going along with what they say."

More than 900 workers trained in disaster rescue and recovery rushed to Christchurch from several countries after the Feb. 22 quake, and have been gingerly picking through the wreckage.

Jim Stuart-Black, the fire service chief who heads the work force, said his teams would start using more heavy machinery the clear the debris, though they would continue to work carefully "to allow for that miracle."

Among the missing and presumed dead are dozens of foreigners, most of them students and staff of an English language school that was in an office within the CTV building, which collapsed completely in the disaster.

Ethel Uy, whose niece Rhea Mae Sumalpong is among 11 Filipinos missing in the quake, said if she had been killed then the family wants her body returned to them so they can hold a funeral.

"We've prayed for a miracle from God, it's all up to God," said Uy by phone from the central Philippine province of Cebu, speaking of Thursday's decision in New Zealand. "If that's Rhea's fate, our wish is for all of her remains to be brought back to us. We want to give her a proper burial."

Prime Minister John Key announced a national memorial service would be held in Christchurch, with the date to be set later.

"Today is a day when we as a nation, along with our many friends around the world, mark with a heavy heart and great sadness this moment of unbearable loss for the many families involved," he said.

Rescuers saved 70 people in the first 26 hours after the quake struck just before 1 p.m. on Feb. 22, but no one has been found alive since.

Of the 161 bodies recovered thus far, only 13 have been publicly identified because the extent of injuries suffered by many victims has made the process slow and painstaking, requiring DNA testing or dental records, officials say.

That has left relatives with a small window of possibility that their loved one somehow escaped the quake but has been unable to contact their families or authorities.

Two Israeli backpackers were the first foreigners named among the dead, as the painstaking work of confirming the identities of scores of others gained pace.

Hoyle said 90 of the bodies found so far were pulled from the CTV building, which housed a regional broadcaster and other offices including the language school, which taught students from Japan, China, the Philippines and other nations.

He said police and those responsible for identifying bodies had met victims families to explain why the process was proceeding so slowly.

Officials said work finally started Thursday at the collapsed bell tower of the Christchurch cathedral, which had to be braced before crews could enter. Up to 22 bodies may be buried there.

Other parts of the city were slowly returning to normal, though many of the 350,000 residents still have cut or limited water and power supplies and are using thousands of portable toilets because of damage to the sewage system.

Associated Press writer Jim Gomez contributed to this report from Manila, the Philippines.