The bill would restrict the collective bargaining rights of roughly 350,000 people compared to Wisconsin's 175,000 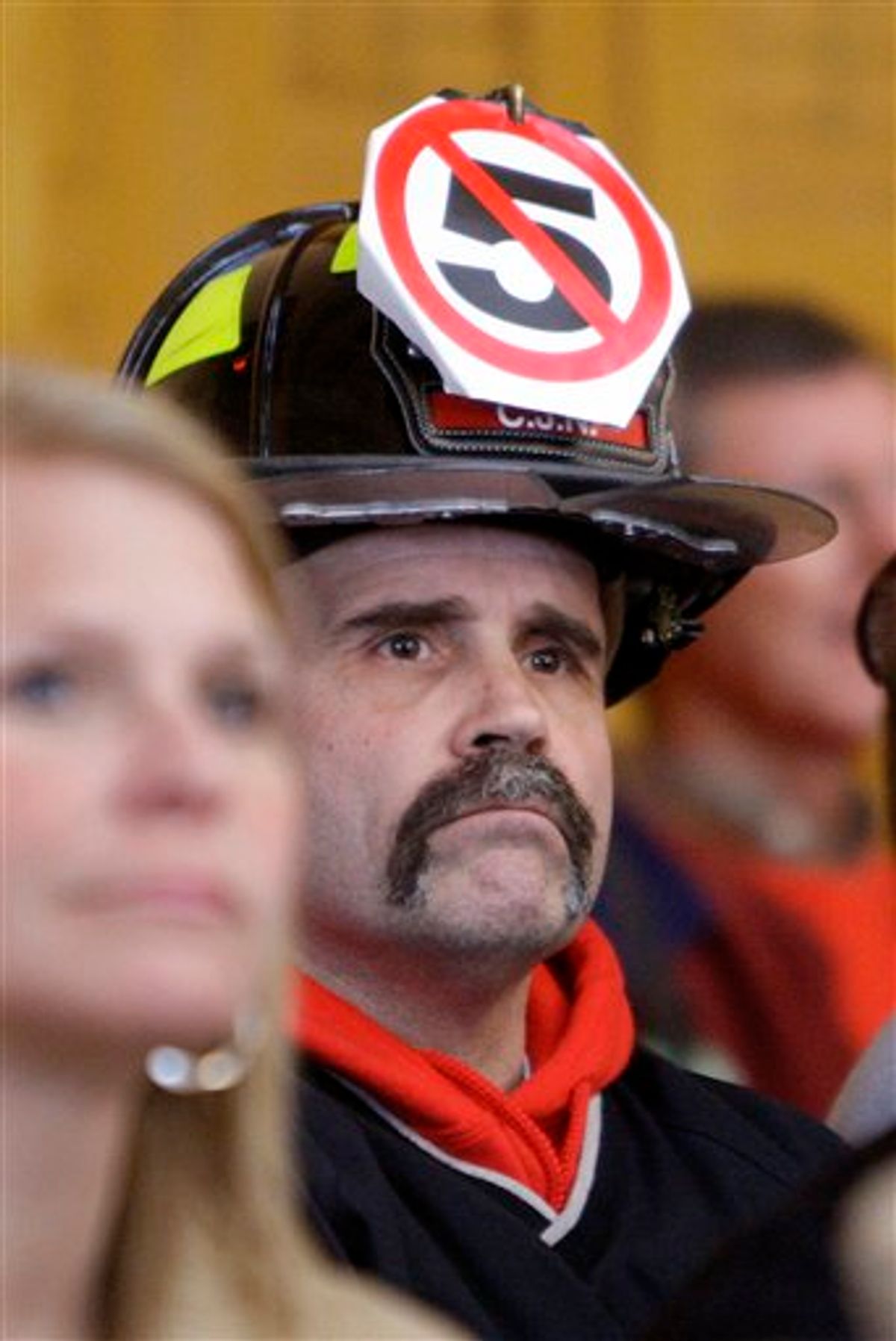 While much of the nation's attention remains focused on a stalled proposal in Wisconsin to restrict collective bargaining rights for public workers, an Ohio measure that in some ways is tougher and broader is speeding toward reality.

A Senate panel and then the full chamber approved the Ohio measure Wednesday amid jeers from onlookers. The bill would restrict the collective bargaining rights of roughly 350,000 teachers, firefighters, police officers and other public employees, while Wisconsin's would affect about 175,000 workers and exempt police and firefighters.

"For as far-reaching this thing is and how many lives it will affect, I can't believe how fast it moved," said Columbus Police Sgt. Shaun Laird, who wanted lawmakers to spend more time debating the changes.

Wisconsin's bill remains in limbo after Democrats hightailed it for the Illinois border on the day the Senate was to adopt the bill. Their absence left the chamber one member short of the quorum needed for a vote.

In contrast, the Ohio bill could go as early as next week to House committee hearings. Republicans hold a 59-40 majority in the House, where the measure is likely to receive strong support.

Ohio Gov. John Kasich, a Republican like his Wisconsin counterpart, Scott Walker, praised the development. Both have pushed the collective bargaining bills as part of budget-balancing measures.

"This is a major step forward in correcting the imbalance between taxpayers and the government unions that work for them," Kasich said.

The differences and similarities between the two proposals are many and nuanced, especially because lawmakers continue to debate and insert or subtract individual proposals. But to critics, at least one thing is clear: Both bills are meant to weaken the role of the unions.

"From the perspective of unions, both bills are punitive and would severely restrict what they have traditionally bargained over and what they have done as organizations," said Harley Shaiken, a professor at the University of California at Berkley who specializes in labor issues.

The Ohio bill would ban strikes by public workers and establish penalties for those who do participate in walkouts. State workers in Wisconsin are already prohibited from striking.

Unionized workers in Ohio could negotiate wages, hours and certain work conditions -- but not health care, sick time or pension benefits. The measure would do away with automatic pay raises, and base future wage increases on merit.

Wisconsin's measure would forbid most government workers from collectively bargaining except over wage increases that aren't beyond the rate of inflation. Police and firefighters would be exempt.

Both states' capitols have been mobbed by protesters, Ohio's not as intensively as the two-week-long siege in Wisconsin. Protesters in Ohio were fewer Wednesday during the marquee vote in the Senate than they were the day before, when 8,500 demonstrators gathered inside and out.

"Shame!" firefighters and teachers shouted in the Senate chamber as the measure squeaked through on a 17-16 vote.

Standing in the rotunda afterward, Columbus firefighter Terry Marsh said he understood the Legislature's need to look for ways to save on costs and examine collective bargaining.

"But to ram something through within a few weeks is irresponsible, and to blame the budget woes of the state on the workers is a downright travesty," he said.

Ohio's legislation would also set up a new process to settle worker disputes, giving elected officials the final say in contract disagreements. Binding arbitration, which police officers and firefighters use to resolve contract disputes as an alternative to strikes, would be eliminated.

Republican Sens. Tim Grendell of Chesterland and Bill Seitz of Cincinnati spoke out against the new proposed way to resolve disputes. Grendell said the process would turn workers into beggars before city councils and other officials who oversee them.

"No one can be a judge and advocate in their own cause," Seitz said. "That's called 'heads I win, tails you lose.'"

Seitz had expressed disappointment in the bill and was removed from the panel by its leaders, a move that secured the votes needed to get the legislation before the full Senate.

Anthony Caldwell, spokesman for the Service Employees International Union, District 1199, said the union's focus will now turn to the House. Members there serve shorter terms and may be more vulnerable to repercussions at the ballot box than senators, he said.

"We hope that the members of the House will understand the valuable role working families play in their districts," he said. "The House is a two-year body. Whatever happens, people are going to remember that. This isn't just about union issues, this is about working people."