How to think about the public pension mess

Are government workers getting too good a deal? Economist Dean Baker doesn't think so 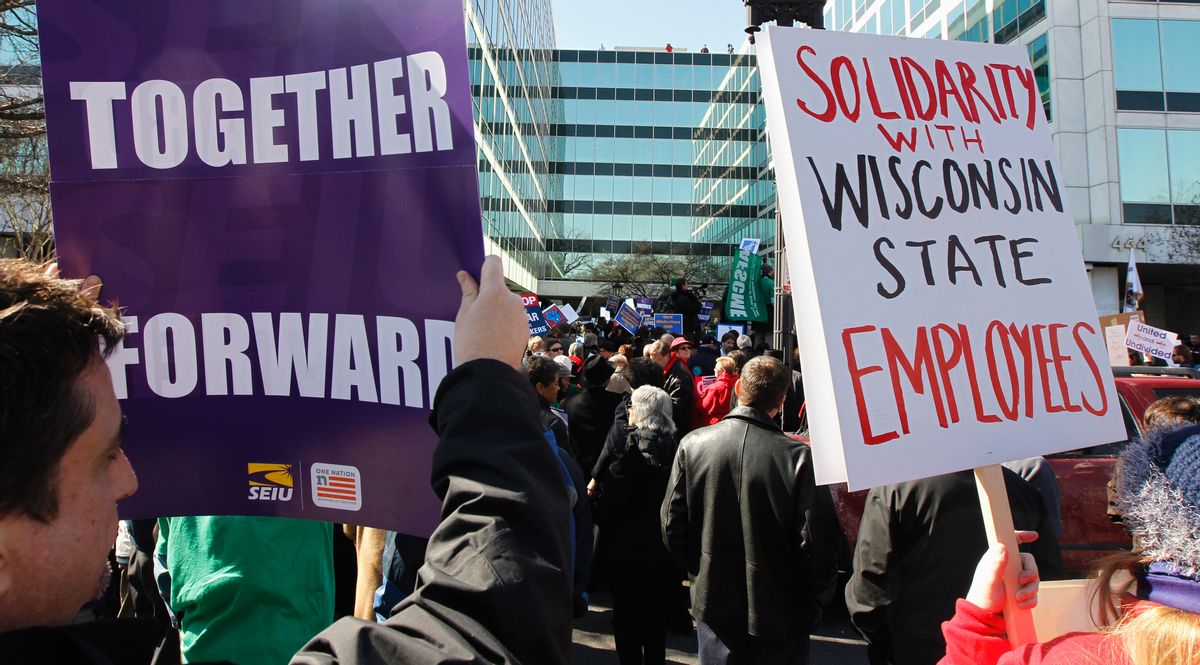 How bad is the public sector pension fund crisis? Last week, economist Dean Baker, co-director of the Center for Economic and Policy Research, published a paper asserting that the strain on state finances posed by "unfunded pension liabilities" wasn't nearly as bad as Republican politicians have been claiming. Assuming decent economic growth for the next 30 years, the situation was "manageable," wrote Baker.

With the showdown in Wisconsin fueling a raging debate over all aspects of the relationship between governments and public sector unions, Baker's paper offered strong ammunition to anyone wanting to push back against the notion that pension liabilities are a Damoclean sword hanging over state governments from California to New York. But acclaim has hardly been unanimous. For every Baker citation, you can find someone on the other side pointing to the much more pessimistic analyses, such as the one published by Manhattan Institute fellow Josh Barro in the spring issue of National Affairs, "Dodging the Pension Disaster."

The attempt to reconcile these clashing views takes us into some seriously wonkish waters, and there's a limit to how much enlightenment you can elicit from dueling blog posts. After absorbing some of the counter-arguments to Baker's thesis, Salon spoke with the economist Thursday morning to see if we could get some more clarity on this highly confusing, and politicized, issue.

It seems like the first point to try to clear up is why there is such a wide disparity between estimates of how much states are falling behind on their pension fund commitments. I've seen figures for the total unfunded pension liability for all states put together that go from $1 trillion all the way to $3.2 trillion. You fall at the lower end of that spectrum, but how do we account for such a big gap?

The main difference is simply the discount rate that is used when we try to calculate unfunded liabilities. The number I use is the standard discount rate -- it's what the funds themselves use, what's been used historically. There is some variation across states -- but the average is about 8 percent.

Let's back up here. What is the discount rate?

The discount rate is, in effect, the return that you are expecting your assets to get over time. What the states are doing is projecting out over a 30- or 40-year horizon. You start with "here are our liabilities," and "here is how much money we will need today to meet all those liabilities." Then you use the discount rate to figure out how much money you will have in 2020, 2030 or 2040 compared to what is currently sitting in the bank or in the stock market in 2011.

Josh Barro's paper observes that there are different accounting standards for the public sector and the private sector. The Government Accounting Standards Board allows states to set the discount rate at the rate of return governments expect to get from investments made in, for example, the stock market. But the private sector, he writes, must conform to something called the "market value of liabilities," which essentially requires a "risk-free" rate of return, and means a lower discount rate of around 5 or 6 percent. The bigger estimates for unfunded liabilities come when you use the lower discount rate. Why do governments get to use a higher rate?

The logic here is that private sector firms could go out of business at any time. In the private sector the federal government's Pension Benefit Guaranty Corp. is on the hook for private sector pensions if a company goes out of business and they are not able to meet their full liabilities. So the PBGC says you have to maintain a fund that's fully funded, assuming a risk-free Treasury rate -- the return that you'd get if you'd invested in U.S. Treasuries, i.e., the safest place you can put your money. That way, if you go out of business tomorrow we're not on the hook for your liabilities. The logic that permits the government to assume a higher rate is that governments are supposed to be around in perpetuity. Sure, we could have a nuclear war or something, but outside of that there is no real story you can tell in which the state of Illinois goes out of business tomorrow.

So even if the state of Illinois currently is in dire financial straits, we just assume that they are eventually going to muddle through it somehow.

What about the critique that says the real problem is that government pension plans are "defined benefit" plans that expose taxpayers to risk. For employees the plans are great; they can count on a fixed pension no matter what happens to state finances over time, but taxpayers pay the bill if governments screw up. The private sector has almost completely abandoned defined benefit plans in favor of defined contribution plans like 401Ks. What we're hearing a lot of from conservatives right now is that the defined benefit model just doesn't work in the long run.

No, they are actually being very sloppy on that. It's really amazing to me, because what I am giving to you is 100 percent the neoclassical orthodoxy in the economics profession -- or at least it was when I was in grad school. When I was in grad school economists would get up there and tell you here's why companies and governments have defined benefit pensions. If you have basically an infinitely "live" entity -- a company that you expect to stay around forever or a government that you expect to stay around forever -- they can afford to go through periodic downturns in the stock market. Even a prolonged downturn, three, four, five years, isn't in any obvious way a big deal for the state of California or Montana or whatever. Whereas if you or I are hitting our retirement and we want to cash out and the stock market is down, that is a big deal.

So the logic is that you have an entity that is essentially indifferent to risk in the short-term, and an individual that cares a great deal about risk at a specific point in time. So what the company can do or the government can do by offering a defined benefit pension is give something of great value to workers at very low cost to itself and in principle that is supposed to lead to lower wages than they would otherwise have to pay. And all this is just the straight neoclassical economics. Workers are getting something of value that costs the company or the government very little so they are willing to accept somewhat lower wages than they would otherwise get.

But it's not just conservatives who are saying that the system is broken. Even in states with Democratic governors like California and New York, people like Jerry Brown and Andrew Cuomo are talking about reforming pension fund benefits. If the long-term problem is as manageable as you say it is, where did things get off track?

Well, there are several issues here. A lot of states did not properly budget. In New Jersey, for example, it almost became a joke that they weren't paying their pension contributions. So they really do have a serious issue of underfunding -- no doubt about it. So, yes, you do have cases where states do have underfunded pensions, which are going to be a big liability. And it was irresponsibility on the part of the legislatures and governors to let that happen .

The other part of the story is that you have these sort of poster children where this or that person has retired at age 51 with a six-figure pension. Now they are the exception -- we know that, because we have data on average pensions and they are pretty low in almost every case. In Wisconsin I think the average pension is $24,000 or $25,000, and you'd be pretty hard-pressed to say that's lavish. Bu there are certainly outlying cases, and I myself would think it's a good idea to change those. You probably don't want to have people retiring under the age of 60. Maybe police and fire might be an exception, but there probably aren't a lot of positions where you want people to be able to retire at these very young ages and be able to get full pensions. So I could certainly understand changing that. But the principle of the defined benefit pension, I think, still makes a lot of sense. And the fact that states are in a position to give it to their workers at very little cost -- again, assuming proper budgeting --  is not a bad thing. You can highlight the cases, New Jersey and a few others, where states have been irresponsible, but I would just point out that most states have been responsible. Yes, there are cases where the elected officials have not done what they should have in keeping the funds properly funded, but that doesn't mean the principle is a bad one. It just means that you have to police those as you would any public program.

Even with the discount rate that you use, there's still around $1 trillion worth of unfunded liabilities. You have made the point that most of that shortfall should be attributed to the stock market crash, and that a rising stock market will erase much of the problem. But states have to balance their budgets every year -- when the market crashes and future liabilities shoot up, doesn't that put pressure on budgets in the meantime?

No. States to do not have to make up those shortfalls in the same budget year. That wouldn't make sense. It's not just being lax. You have a plunge in the stock market and let's assume for the moment that it doesn't come back (of course it has largely come back from where it was -- but let's for the moment assume it didn't). States have different rules on this but it makes no sense to say you have to make it up in a single year, when you could make it up over five years. If you have a properly funded pension going in, you won't have created a disastrous situation.

But a lot of states didn't have properly funded pensions going in. As you and others have pointed out, when the market over-performed during the tech boom, a lot of states took the opportunity presented by bloated portfolios to avoid injecting extra cash into their pension funds, or, even took cash out. In California, we added a lot of what people call "sweeteners" to the benefit system, which ended up increasing the liabilities of the system when times were not so flush.

They certainly did and, again, that was irresponsible.

So that was a big mistake.

Exactly. What I have argued about this is that the discount rate you assume going forward should depend on current market valuations. In the late '90s tech bubble, it was just not reasonable to assume the same returns going forward. States should have assumed lower returns going forward, which would have meant that they wouldn't have been able to take out money, or at least very little. When you have a high stock market you want to assume a lower discount rate and when you have a relatively low stock market you can assume a higher discount market rate.

Absolutely right, and again -- that was bad practice. I was trying to point that out at that time -- it was just asking for disaster -- but this was the stock bubble days and people wanted to believe it was going to go on forever.

Budget Showdown How The World Works The Labor Movement