Protesters and police clash once again in Libya 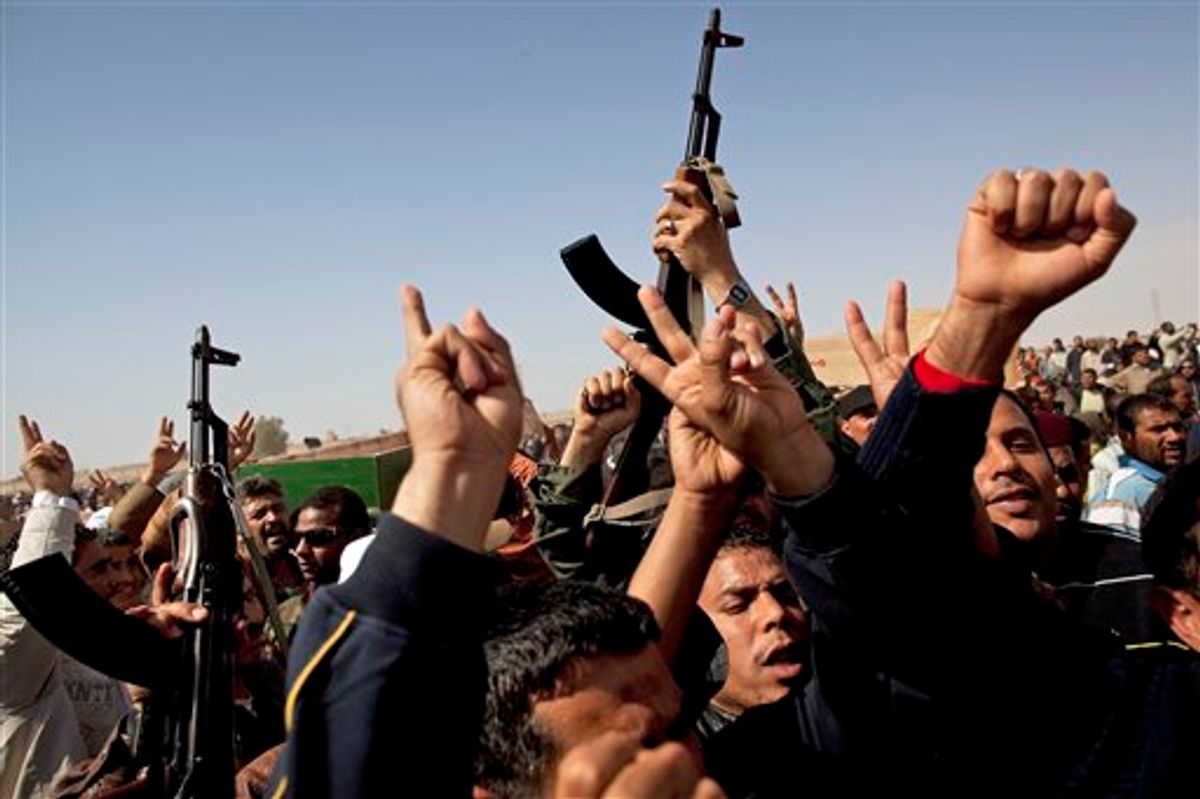 TRIPOLI, Libya (AP) -- Protesters marched from mosques in the Libyan capital Friday, calling for Moammar Gadhafi's ouster, in defiance of a heavy crackdown by regime supporters over the past week that has spread fear in Tripoli.

Forces loyal to Moammar Gadhafi have fired tear gas at protesters marching in the capital Tripoli.

The security forces fired at least five cannisters of tear gas at the crowd of around 1,500 protesters in the Tripoli district of Tajoura. The crowd briefly scattered, but rejoined to continue their march, according to an Associated Press reporter at the scene.

Similar protests a week ago were met by a brutal crackdown, when militiamen opened fire on demonstrators moments after they began their marches, killing a still unknown number. Since then, pro-Gadhafi forces have carried out a wave of arrests against suspected demonstrators, snatching some from their homes in nighttime raids.

In the morning Friday, security forces set up checkpoints in parts of the capital, searching cars and questioning drivers to find anyone who might be planning to join the protests. Internet services, which have been spotty throughout Libya's upheaval, appeared to be halted completely in Tripoli on Friday.

Still, some 1,200 protesters marched out of the Murad Agha mosque in Tripoli's Tajoura district after noon prayers were completed. They chanted "the people want to bring the regime down" and waved the red, black and green flag of Libya's pre-Gadhafi monarchy, adopted as the banner up the uprising.

"I am not afraid," said one 29-year-old man among the protesters. He said in the protests a week ago one of his relatives was shot to death -- not by militias, he said, but by a pro-Gadhafi infiltrator among the demonstrations. "There are many spies among us. But we want to show the world that we are not afraid" he said, speaking on condition of anonymity because of fears of retaliation.

Control of the capital is crucial to the Libyan leader, since it remains his strongest remaining bastion amid the uprising that began on Feb. 15 and has broken the entire eastern half of Libya out of his control. Even some cities in the west near Tripoli have fallen to the uprising, and the opposition has repelled repeated attacks by pro-Gadhafi forces trying to take back the territories.

A large force from a brigade led by one of Gadhafi's sons led a new attack Friday on Zawiya, the closest opposition-held city to Tripoli, a resident said. The troops from the Khamis Brigade -- named after the son -- attacked Zawiya's western side, firing mortars and then engaging in battles of heavy machine guns and automatic weapons with armed residents and allied army units, said the resident.

"Our men are fighting back the force, which is big," the resident said. Zawiya, about 30 miles (50 kilometers) west of Tripoli, has beaten back several assaults the past week.

Throughout the night and into the early hours Friday, pro-Gadhafi forces also fired mortars and anti-aircraft guns at the outskirts of opposition-held Misrata, Libya's third largest city located just east of Tripoli, a doctor in the city said. He said it appeared to be an intimidation tactic, causing no casualties.

The crisis has turned into something of deadlock between the two sides. Gadhafi's forces have been unable to take back significant ground from the rebellion. At the same time, his opponents, made up of ragtag citizen militias backed by mutinous army units, don't seem to have the capabilities to make a military move against territory still in regime hands.

Instead, the eastern-based opposition is hoping that residents of those areas -- including Tripoli -- will be able to rise up like they did in other cities where protesters drove out Gadhafi loyalists.

Friday could be a significant test of whether the opposition can maintain protests in Tripoli in the face of a fearsome clampdown.

Several hours before prayers, streets were eerily empty, with few residents out. Security forces, however, began to take up positions. In Tajoura, an eastern district of the capital where protests a week ago were attacked, police set up two checkpoints on the main highway leading to downtown. They stopped cars to search them, check drivers' ID and ask where they were going or coming from.

Before noon prayers, worshippers massd in the Murad Agha mosque, debating on the next steps. They said messages between Tripoli organizers were being aired on radio being aired from Benghazi, the main city in the opposition-held east, and audible in the capital. At one point, they decided to hold a sit-in inside the mosque to avoid coming under gunfire by stepping outside.

"Gadhafi lies with impunity," said one 80-year-old among the worshippers, wearing traditional Libyan dress. "For 40 years, he never told the truth."

But in the end, the 400 protesters inside marched out, joined by hundreds of others.

Libyan authorities briefly barred many foreign journalists from leaving their hotel in Tripoli, claiming it was for their protection because they had information "al-Qaida elements" plan to open fire on police to spark clashes. They later allowed them to go out into Tripoli.

Gadhafi loyalists in the capital have unleashed a wave of arrests and disappearances since last Friday's bloodshed. Bodies of people who vanished have been dumped in the street. Gunmen in SUVs have descended on homes in the night to drag away suspected protesters, identified by video footage of protests that militiamen have pored through to spot faces. Other militiamen have searched hospitals for wounded to take away.

Residents say they are under the watchful eyes of a variety of Gadhafi militias prowling the streets. They go under numerous names -- Internal Security, the Central Support Force, the People's Force, the People's Guards and the Brigade of Mohammed al-Magarif, the head of Gadhafi's personal guard -- and they are all searching for suspected protesters.

"While you are speaking to me now, there are spies everywhere and people watching me and you," one man said, cutting short a conversation with an Associated Press reporter visiting the Tripoli district of Zawiyat al-Dahman on Thursday.

The fear among Gadhafi opponents is so intense that when one family set up a mourning tent in Tripoli's Fashloum neighborhood on Thursday for a 56-year-old protester killed last Friday, no one showed up to pay condolences.

During the man's burial several days earlier, "the militia was also there watching us," said the man's brother. He -- like other residents -- asked that he and his relatives not be identified for fear they too would be hunted down.

He said his brother was shot when militiamen opened fire on protesters emerging from Fashloum's main Al-Baz mosque last week. "My brother was hit with a bullet right in the heart. In minutes he lost all his blood," he said, showing a mobile phone video clip of the body, with a hole in the chest.

While rushing to Tripoli's central hospital, he found militia stationed in front of the building.

"Doctors at the hospital told me that they are taking the injured to underground rooms inside the hospital away from the militia," said the brother, who is a doctor himself.

The number of deaths across Tripoli last Friday is not confirmed. The brother gave the names of six people from Fashloum who were killed. He said other bodies of slain protesters that day were seen being loaded into cars by militiamen and have not been seen since. He said he knows families who are still searching for bodies of their loved ones.

Others were arrested later on. The brother said he knows a 37-year-old man who disappeared for several days afterward. Then his body was dumped in a street in Tripoli's Abu Selim district.

In Tajoura, a 31-year old protester showed the AP on Thursday the houses of his two brothers, who were rounded up in a 3 a.m. raid a day earlier.

The protester said he was on the roof of a nearby building during the raid, counting the militia vehicles: 15 white pickup trucks with People's Guards license plates and two 4x4 Toyotas screeched up to the adjacent houses in a narrow, unpaved alley. They cordoned off the buildings, militiamen leaped over the buildings' fences, froze the door locks off with a compressed substance in cans and broke in. They drove off with his 32- and 35-year-old brothers, whose whereabouts remains unknown, the protester said.

They were among 20 protesters rounded up in Tajoura at that same time, according to various residents.

"They call Tajoura 'the terrorist neighborhood' because we dared to call for ousting Gadhafi," the protester said.

In the home of one of the arrested men, clothes were left scattered around the living room, drawers were open and the TV was still on. The door was intact, but its lock was knocked out. In the bedroom, the mattress was overturned. The protester said money, jewelry and four mobile phones were also taken. Other young men from the family had already been arrested days earlier, he said.

Except for the barking dogs, the house was empty and still.

"We moved their families away from here. There is no way they can stay after what happened," he said, adding that he and his fellow activists had also decided not to spend the night in their homes.

"This is the message to all Libyans: if you say you don't want Gadhafi, this is what will happen to you," he said.