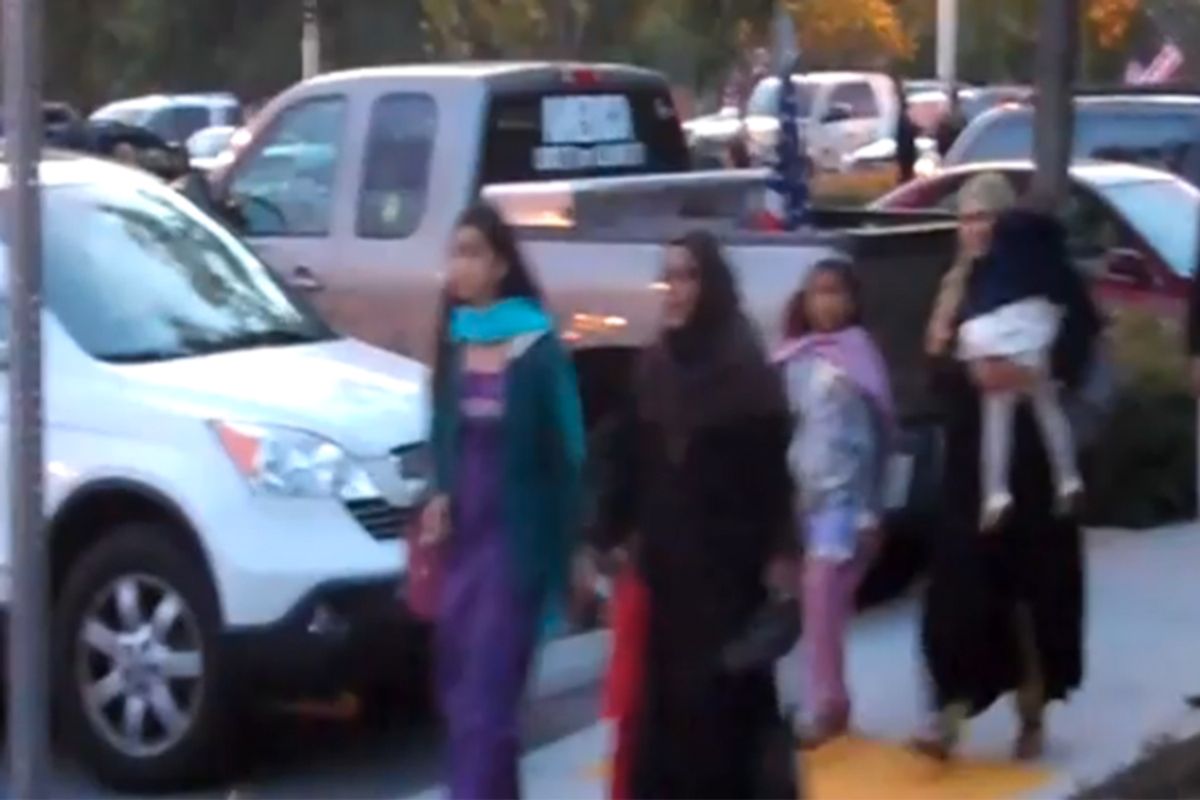 By now, there's a good chance you've seen a video rocketing around the Web of anti-Muslim protesters screaming at families entering an Islamic charity event in Orange County last month. One of the most striking parts of the scene is protesters continuing to shout "go home" and "Muhammed was a pervert!" even as young children walk by with their parents. (Watch it below.)

On Thursday night, I talked to one of those parents, Orange County resident Nusrap Kureishy, who had to walk through the gauntlet of protesters with her three children. Kureishy, who is originally from India but has lived in the U.S. for many years, has a 10-year-old daughter, a 5-year-old son, and a 2-and-a-half-year-old son. The parking area for the event, which was sponsored by the Islamic Circle of North America [ICNA], was a bit of a walk from the entrance to the community center -- and a valet service hired by ICNA backed out when its employees saw the angry protesters.

Kureishy, who has been involved with ICNA programs for Haiti relief and foster care, described what it was like to walk by the protesters:

"My daughter was so frightened that she just didn't say anything. She was really terrified because she did realize that these people were against us. As soon as we got out of the car, people started taking pictures and started shouting, there was so much noise," she says. "My 2-and-a-half-year-old boy who was sleeping got up and started crying."

She describes her daughter as "traumatized." When they got inside, Kureishy had to sit her down and talk to her. "I just said, 'It's OK, and these people are not going to hurt you.'" They put down the blinds inside so the children would not have to see the protesters.

I asked Kureishy if the episode had fundamentally changed her attitude toward her community. It had not, she said. "When I go to school to drop off my kids, everyone is so friendly. They don't make me feel as if I am intruding or I don't belong here. So I was shocked that these people hated us so much, but I also realized it's not everybody -- it's just a few people."

The event attracted protesters because of two controversial speakers, Siraj Wahhaj and Abdel Malik Ali, described by the Orange County Register this way:

Wahhaj is an imam at a mosque in Brooklyn. A U.S. attorney named him and 169 others as co-conspirators in the 1993 World Trade Center bombing. Wahhaj was never charged and has denied involvement.

Malik Ali is a Bay Area Islamic activist who spoke at "Israeli Apartheid Week" at UC Irvine in 2010. There he said he supports Hezbollah, which the CIA labels a terrorist group.

ICNA spokesman Waqas Syed, who also lives in Orange County, told me Thursday that "we invited the speakers for their social services work in Brooklyn and Oakland, and not because of their political stances on the Middle East -- which we may or may not have agreed with." He said the event was entirely apolitical. Malik spoke about neighborliness, he said, and Siraj spoke about giving back to society.

Syed says the local Muslim community was stunned by the episode.

"People were terribly, terribly scared," he says. "No one has experienced this level of protest before in any event, period."

Here, again, is the video: