"The Birth of Classical Europe": Does history still have a place in a Wikipedia age? 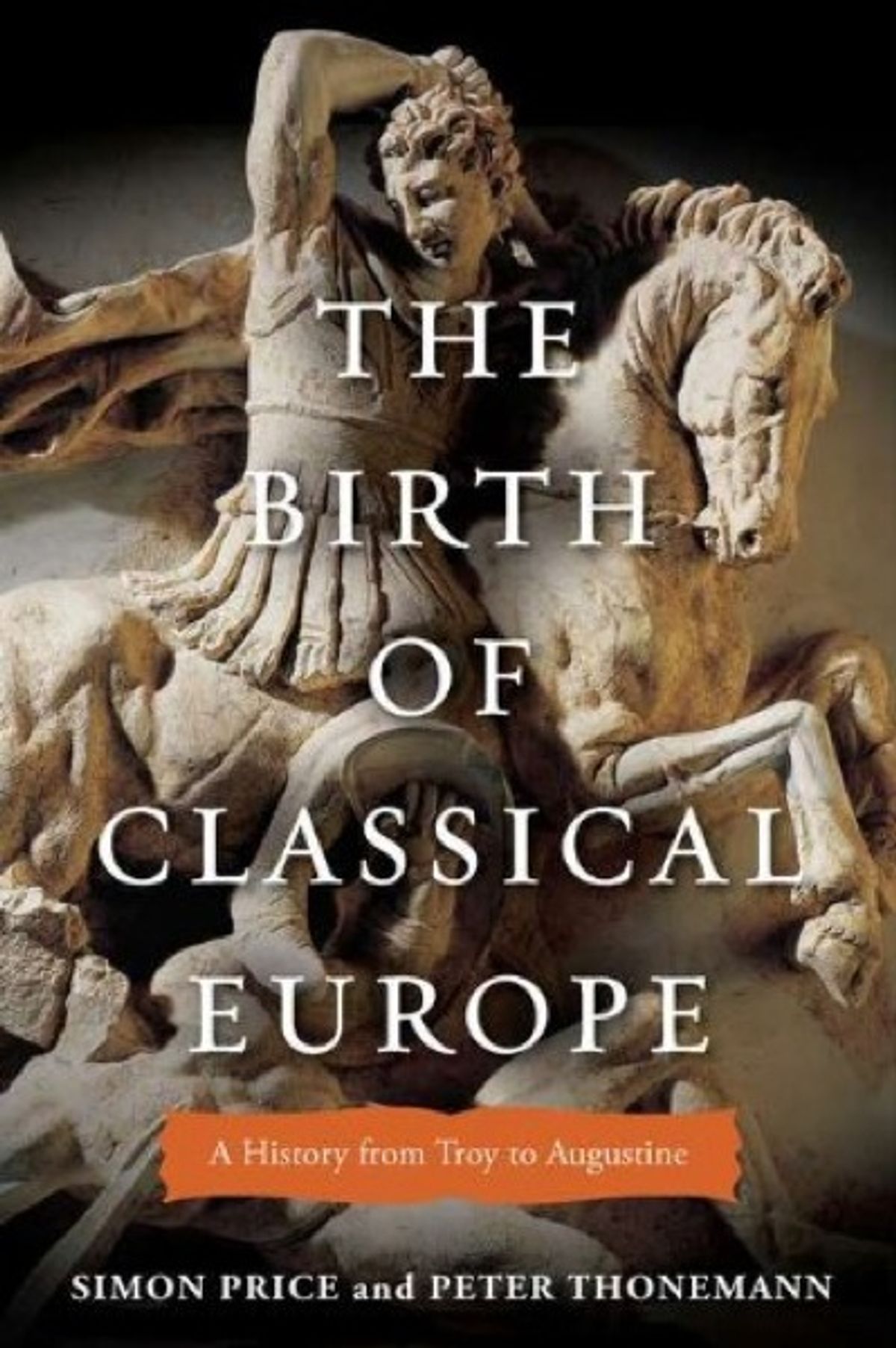 Is there a role for popular grand history -- the grand old history of names, narratives and (scariest and dodgiest of all) nations -- in the age of Wikipedia?

At the dawn of the present century, writers, publishers and readers of the genre must have counted not merely on its survival, but revival. Sept. 11, for all its self-consciously seismic effects on the surrounding discourse, only affirmed the apparent trend. What, after all, is the end of history -- in the teleological, species-encompassing monotony of either classic liberalism or revolutionary Marxism -- but a return to the colorful history of maps and chaps, sects and infidels, great walls and defenestrations, the past as telenovela? Indeed, following five decades or more of the most totalizing, ineludibly modern sort of ideo-economic (not to mention industrio-ballistic) conflict, we've reached a historical moment transfixed, and perplexed, by goings-on in Mesopotamia, revolts against Pharaoh, and cultural-fiscal tiffs between Latin and Germanic Europe.

So Penguin was, in a way, exquisitely prescient when it set off, in the parlance of comic-book mythos without beginning or end, to "reboot" its "Penguin History of Europe" a decade ago. After William Chester Jordan's "Europe in the High Middle Ages" (2004), Chris Wickham's "The Inheritance of Rome: Illuminating the Dark Ages, 400-1000" (2007), and Tim Blanning's "The Pursuit of Glory: "Europe 1648-1815" (2009). Penguin's chronology is as confoundingly ad hoc as a "Hulk" or "Superman" film franchise -- the series now alights on the origin story, or "A History From Troy to Augustine." Series editor David Cannadine is a scholar of the British Empire by trade (he wrote 2001's clever and influential "Ornamentalism"), but his instincts as historiographical casting director appear as well acquitted to the haze of Pax Romana and its B.C. antecedents as they were to the more recent Peaces, of Westphalia and Vienna, which bookended Blanning's well-received entry. Perhaps the greatest tribute one can give Oxford classicists Simon Price and Peter Thonemann is that "The Birth of Classical Europe" reads nothing at all like a textbook, despite being charged to cover about twice the ground in 350 pages -- 1750 B.C. to A.D. 475, give or take -- than its three much longer predecessors combined.

Of course there was, for better or worse, probably more of the raw "stuff" of history -- written (and electronic) correspondence, commercial records, diplomatic "cables" -- created in the first month of 2011 than in the entire second millennium B.C. Still, Price and Thonemann have an uncanny feel for evidence capable of appealing viscerally to modern, relatively well-informed civilians as neither arcane (the pointy-head specialist trapping us in the trees) nor cheap (the silver-tongued "intellectual" cultivating his public). Though the derivative high literature is properly (and succinctly) surveyed, the outsize affective role of Troy -- a war, after all, which no serious archaeologist will quite exactly confirm took place -- is most neatly demonstrated by a bit of Banksy­-clever found art: already in 730 B.C., far afield in the Bay of Naples, a 12-year-old boy is buried with a wine cup inscribed, in Euboean, with a joke obliquely referencing Nestor, mythic king of Pylos. Similarly, the rather absurdist hangover of classical prestige that's plagued Europe since the 19th century is evoked through episodes perfectly pitched between farcical and tragic. Consider, for instance, modern Greece's decade-long geo-linguistic campaign against international recognition of the Republic of Macedonia, because the Macedon of Alexander the Great was Hellene while today's impostors are Slavs. This is the richest irony; as Price and Thonemann recount elsewhere, Alexander's sixth-century forbearer needed a legal dispensation to compete in the Pan-Hellenic Olympics since no one was convinced the tribal and king-ruled Macedonians were Greek, at least in the way of the city-states.

In fact, it may be in the focus on the vagaries and self-flatteries of identity that "The Birth of Classical Europe" come closest to the tone and texture of old-school popular history. One imagines the young man, otherwise schooled in engineering or poetry, reading Edward Gibbon before embarking on a career in colonial administration -- or Will Durant before joining the State Department. (His female companions were surely honing skills more crucial and less remunerative -- French, say, or typing.) There is, in other words, a certain expansionist philosophy inherent in any attempt to capture 2,000 years in 400 pages: that the world is both contingent and, for the properly acculturated, coherent. Like the best of their predecessors, Price and Thonemann aren't propagandists or court chroniclers, but actually gracefully incorporate recent academic threads and theories -- even Martin Bernal's oft-caricatured "Black Athena" hypothesis is given a fair hearing. Their genre, however, remains decidedly touristic and so, arguably, static: like the Durants' 11-volume "The Story of Civilization," say, or Churchill's "History of the English-Speaking Peoples" (which Labour rival Clement Attlee piquantly renamed "Things in History that Interest Me"), the imagined audience is not the budding scholar primed ultimately to make her own advances in the field, but the cosmopolitan and curious, moving up from the "Encyclopedia Britannica."

Which, of course, is where our own history seems to contravene on Penguin's good intentions. Launched in January 2001, Wikipedia finally emblematizes nothing less than a revolution for the armchair historian, the cultural dilettante (or polymath) of all kinds. In 1796 or 1996 -- the year Penguin published its previous "History of Europe," a one-volume opus by J. M. Roberts -- the layman prodded for whatever reason to vague interest in the Minoans (the mysterious pre-Greek inhabitants of Crete) could have moved from the "Britannica" (or "Encarta") entry to a treatment like Price and Thonemann's 22 pages on the topic and come away sated. Today, via hyperlink and ubiquitous bandwidth, he could spend as many hours as his determination or day job allows reviewing hyper-detailed blueprints of every Minoan palace, considering the purported matriarchal or even proto-feminist subtext of Minoan bull-jumping, "reading" every extant inscription of Linear A, the undeciphered Minoan script. This is certainly no replacement for actual scholarship -- actual archaeology and philology and dendrology -- but it also represents more than a difference in scale, along some trajectory a real classicist might say started with the Library of Alexandria. Indeed, the library model -- the encyclopedia model -- has, almost imperceptibly, inverted itself even as we continue using its metaphors: For the first time in the popular dispersal of knowledge, it is easier for the casual explorer to reach the raw details, the material evidence, the internecine theoretical squabbles and, yes, even the elaborately manicured fabrications, than any finite, authorized and authoritative account.

In such a world, the obvious defense of a volume like "The Birth of Classical Europe" is the one that "Britannica," for one, spent years plaintively raising against Wikipedia: namely, that average folk need, above all, not information but proportion -- to know, as was famously argued, that Tony Blair deserves more words than Harry Potter, even if both accounts are exponentially more detailed and current than anything easily available in print. Such an impulse far precedes the Internet. In earlier centuries, popular grand history could rather openly be predicated on imparting a certain chronological and moral elegance to its subject matter -- all of Western civilization leading, for the Whig historians, to the British parliamentary settlement; for the Marxists, to bourgeois hegemony, then world revolution. The reason Price and Thonemann aren't saved by appeals to proportion or curation is, ironically but unsurprisingly, the same thing that makes their take on an old form so laudably modern: they're too sophisticated -- or too respectful of their audience's sophistication -- to attempt the feel-good sophistry long synonymous with "popular."

But "The Birth of Classical Europe" isn't a formless cloud of facts and dates, without narrative or argument. (Neither is Wikipedia, incidentally.) At its core is indeed a "meta-narrative" as definitive and, in its way, as political as any of the discredited dogmas. Again and again, this Penguin history foregrounds the way their pasts, real and imagined, loomed in the individual psyches and collective consciousness of people who never knew themselves as "ancients." Charmingly, Price and Thonemann make a running gag of provincial cities lobbying the metropole -- Athens, or Macedon, or Rome -- for privileges based on, as the centuries wore on, ever more convoluted ethno-fraternal ties dating to the Trojan War. One might be tempted to conclude that Troy, across the Aegean on Asia Minor, became in the collective imaginary the ur-instance of that great European preoccupation: Occident vs. Orient, the West against the rest. Many third-century Romans, locked in wars with Persia as interminable as America's against "terror," loudly said just that. But they'd have quickly run up against the complications of history as argument--Rome's millennium-old founding myth had the city settled by the Trojan, not the Achaean (Greek), survivors of the war.

They were, in other words, as confused about themselves as we are about them -- perhaps the grandest historical lesson of all.