Don't celebrate quite yet, but Republican support for Gov. Scott Walker's budget bill is fraying 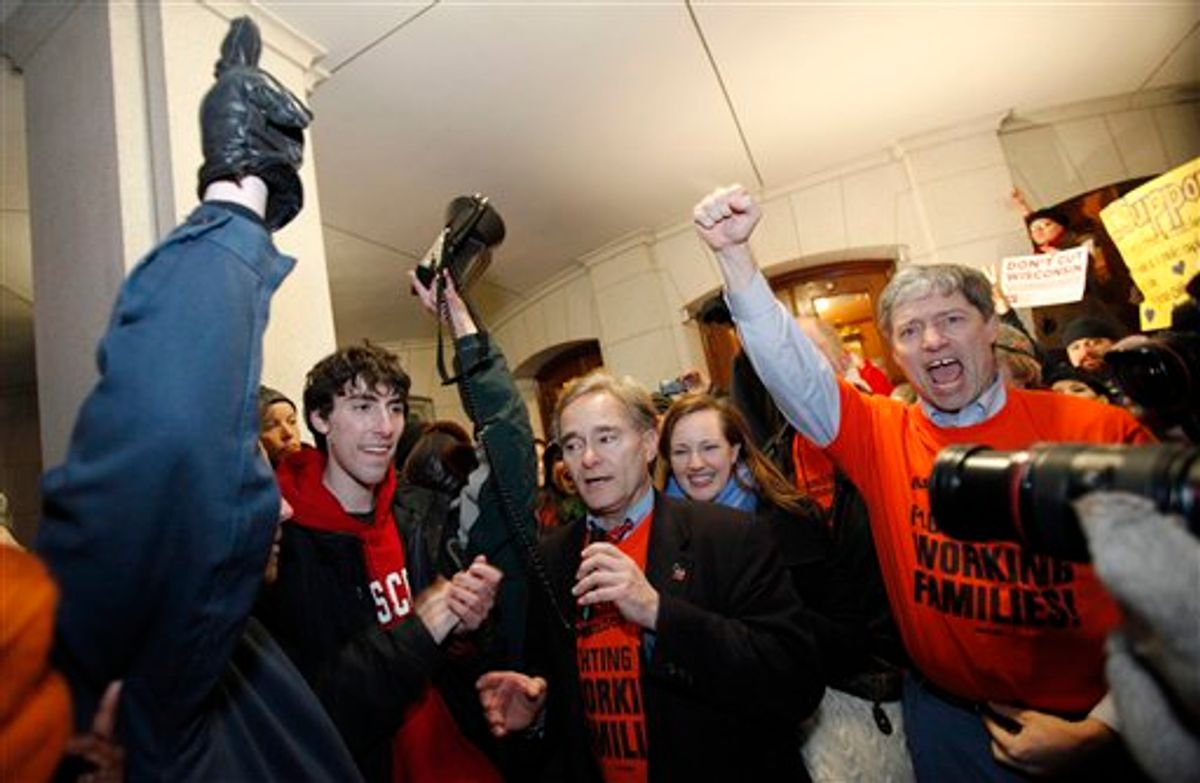 Wisconsin Minority Leader Peter Barca, D-Kensoha, celebrates with other law makers and protesters outside of the state Capitol in Madison, Wis., Thursday, March 3, 2011, after a judge ordered the Department of Administration to open the Capitol to normal business hours starting Monday, March 7, 2011. (AP Photo/Andy Manis) (AP)
--

Just how nervous is Scott Walker feeling in Wisconsin? The Washington Post's Greg Sargent alerts us to a Wall Street Journal article and a local news item in Wisconsin suggesting that two more Republican state senators may be on the verge of rejecting Walker's budget repair bill. Republicans have 19-14 majority in the state Senate, and with one senator already on record in opposition, two more nay votes will kill the bill.

I'll believe it when I see it, but now that even conservative polling outfits have started reporting that significant majorities of Wisconsin citizens voters disapprove of Walker, it could be time to call it a day. Amazing as it might seem to anyone who still remembers the midterm elections, it's looking more and more like Democrats are coming out ahead in this battle, a fact that could have enormous political implications going forward. Even if Walker does get his bill passed, Republican governors are likely to pause before copying his tactics. The recall efforts in Wisconsin are for real. Politicians are starting to run scared.

Two things to note about Stephen Moore's hand-wringing in the Wall Street Journal.

First, there's the brilliant headline, "The Wisconsin Wobblies." Whoever came up with the idea to smear wavering Republican senators with a name that immediately recalls the infamous radical union activists who joined together under the name Industrial Workers of the World (a.k.a The Wobblies) -- should get a special award. A sane person might argue that Republican senators are actually paying attention to the will of the people, but to the Wall Street Journal, their lily-liveredness is cause for a total blacklist. Why not just call them Bolsheviks and be done with it?

Then there is this panicked quote, along with accompanying analysis from Moore:

"Republicans can't turn back in Wisconsin," says Mark Mix of the National Right to Work Foundation. "This will only embolden the unions and weaken efforts at reform all over the country." It's foolish to believe that backing down will satisfy the unions. If history is any guide, more than 90 percent of union money will be used to defeat Republicans no matter what happens.

I have to echo Jonathan Chait here: Wait just a minute -- wasn't this fight supposed to be about balancing the budget? Aren't Republicans supposed to be a little more discreet about admitting that the real goal in Wisconsin was to break the knees of a political opponent?