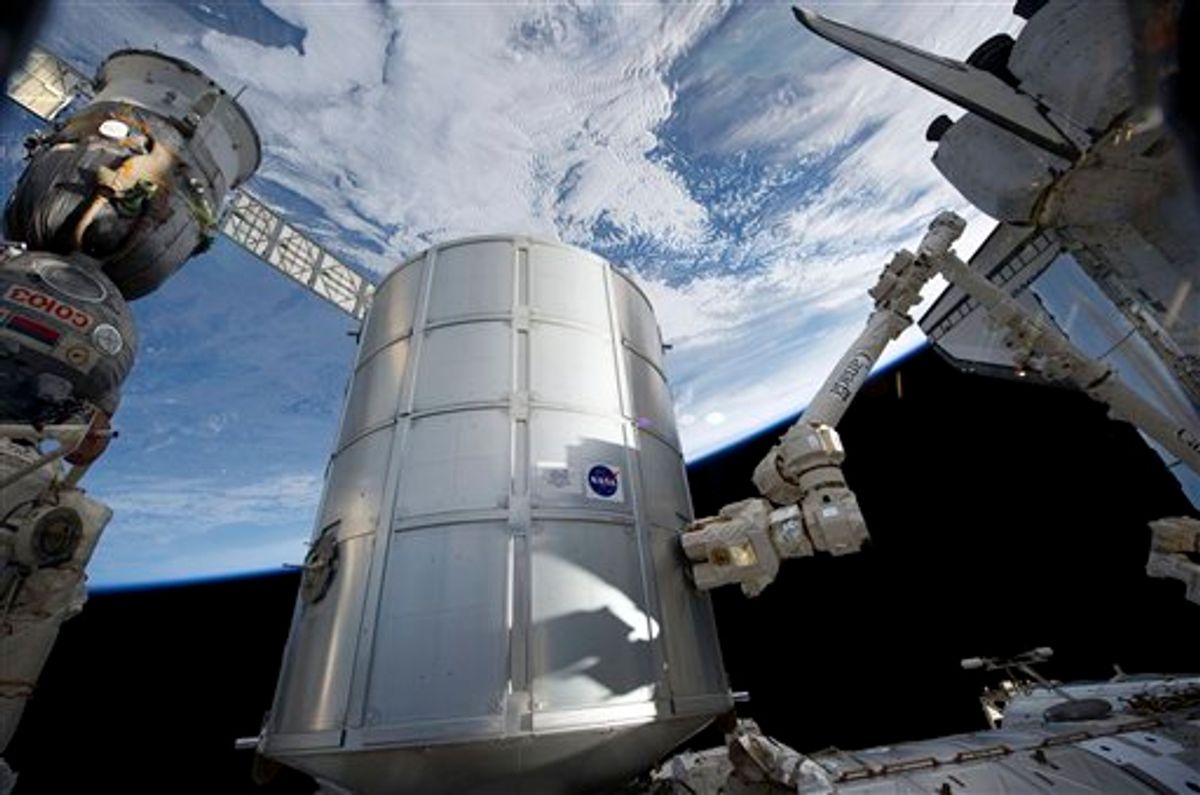 In this image provided by NASA the Italian-built Permanent Multipurpose Module in the grasp of the International Space Station's Canadarm2 is being transferred from space shuttle Discovery's payload bay to be permanently attached to the Earth-facing port of the station's Unity node Tuesday March 1, 2011. Earth's horizon and the blackness of space provide the backdrop for the scene. (AP Photo/NASA) (AP)
--

A rocket carrying an Earth-observation satellite plummeted into the Pacific Ocean after a failed launch attempt Friday, the second-straight blow to NASA's weakened environmental monitoring program.

The Taurus XL rocket carrying NASA's Glory satellite lifted off early Friday morning from Vandenberg Air Force Base in California, but fell to the sea several minutes later. The same thing happened to another climate-monitoring satellite two years ago with the same type of rocket.

"We failed to make orbit," NASA launch director Omar Baez said at a press conference Friday. "Indications are that the satellite and rocket ... is in the southern Pacific Ocean somewhere."

Officials explained that a protective shell atop the rocket didn't come off the satellite as it should have about three minutes after launch. That left the Glory spacecraft without the velocity to reach orbit.

The 2009 failed satellite, which would have studied global warming, crashed into the ocean near Antarctica. Officials said Glory likely wound up landing in the same area. Both were on Taurus rockets launched by Orbital Sciences Corporation of Dulles, Va.

NASA has already started a board to investigate the mishap. The next NASA Earth sciences launch on a Taurus rocket is scheduled for 2013 but the space agency can still change launch vehicles if the Taurus proves unreliable, NASA Earth Science Director Mike Freilich told The Associated Press.

"I don't know if that's necessary or not," Freilich said. "We're not going to fly on a vehicle in which we don't have confidence."

The $424 million mission is managed by the NASA's Goddard Space Flight Center in Maryland. NASA paid Orbital about $54 million to launch Glory, according to Orbital spokesman Barron Beneski. The Taurus rocket has launched nine times, six of them successfully.

NASA and Orbital spent more than a year studying and trying to fix the problem that caused 2009's Orbiting Carbon Observatory to fail. The payload fairing -- a clamshell-shaped protective covering for the satellite -- did not open to release the satellite.

"We really went into the (Glory) flight feeling we had nailed the fairing issue," said Ronald Grabe, general manager of Orbital's launch systems division and a former space shuttle commander.

Orbital officials said they redesigned the system used to trigger the removal of the protective covering and a similar system worked three times in other Orbital rockets, not the Taurus. There are different weight and size issues with the Taurus rocket.

Had Glory reached orbit it would have been on a three-year mission to analyze how airborne particles affect Earth's climate. The tiny atmospheric particles known as aerosols reflect and trap sunlight. The vast majority occurs naturally, spewed by volcanoes, forest fires and desert storms. Aerosols can also come from manmade sources such as the burning of fossil fuel.

Glory would also have tracked solar radiation to determine the sun's effect on climate change.

For about a decade, scientists have complained of a decline in the study of Earth from space. NASA spent more money looking at other planets than it did at Earth in 2007. That same year, the National Academy of Sciences warned that NASA's study of Earth "is at great risk" with fewer missions than before and aging satellites.

NASA's Freilich said airplanes and other satellites can track climate change, though not as well. The solar radiation tracking is done by other older satellites and will continue, while a new proposed satellite, scheduled for launch by the end of the decade, can look for aerosols, he said in a telephone interview from Vandenberg.

The loss of Glory will mostly hurt projections and modeling of future climate change, he said.

Investigators spent several months testing hardware after the 2009 accident, interviewing engineers and reviewing data and documents. The probe did not find evidence of widespread testing negligence or management shortcomings, but NASA declined to release the full accident report, citing sensitive and proprietary information.