As conflict escalates, it's hard to tell where pro-Gadhafi territory ends and rebel-held environs start 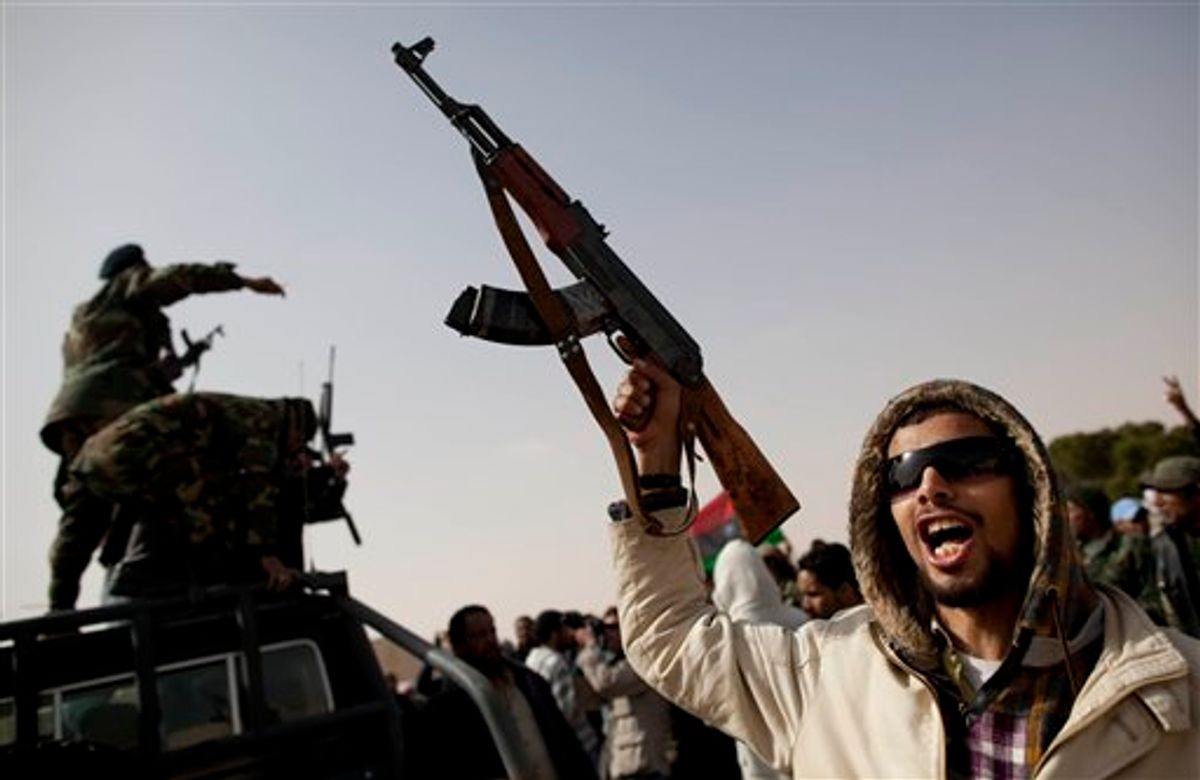 Libyan rebels who are part of the forces against Libyan leader Moammar Gadhafi celebrate after capturing the oil town of Ras Lanuf, in eastern Libya, Saturday, March 5, 2011. Witnesses say Libyan rebels have captured the oil port town of Ras Lanouf from pro-Moammar Gadhafi forces, their first military victory in what could be a long, westward march to the capital Tripoli. The witnesses said on Saturday that Ras Lanouf, about 87 miles (140 kilometers) east of the Gadhafi stronghold of Sirte, fell in rebel hands Friday night after a fierce battle with pro-regime forces who later fled. (AP Photo/Kevin Frayer) (AP)
--

There were no signs of the rebel army, and we were getting perilously close to where the government forces were supposed to be.

In the distance we could see civilians manning the checkpoint into the town of Bin Jawad. They were not the exuberant gunmen flashing victory signs we were used to seeing in the rebel-controlled towns. There was also no sign of the flag of the old monarchy that had become the new symbol of the revolution.

Our driver quietly pulled our own rebel flag off the dashboard and began turning the car around, as it appeared we had stumbled through the lines into the latest no man's land of Libya's uprising-turned-civil war.

After a week-long stalemate, a time when rebel military gave no signs it was interested in advancing, a government strike against oil installations seems to have reignited the war in eastern Libya.

Earlier in the week, government forces from Sirte, Gadhafi's hometown and the gateway to western Libya, moved against the lightly guarded oil facilities in Ras Lanouf and Brega, which together export some two-thirds of the country's oil.

Local rebel militias, later aided by their compatriots in Benghazi, fought them off and started a push westward that has the Libyan rebel army playing catch up.

These days it can be a challenge to find the farthest limit of the rebel advance west, with every checkpoint providing conflicting information about the safety of the road ahead and the location of friendly forces.

After retaking Brega on Wednesday, rebel forces pushed out about 30 miles (45 kilometers) toward its sister oil refinery at Ras Lanouf. Army units soon followed and gave every indication they were digging in -- until abruptly on Friday dozens of pickup trucks of volunteers went roaring off to the west.

"We took the army camp near Ras Lanouf last night at 7 p.m., but there were few weapons left, and the soldiers escaped," said Borawi Saleh, an oil engineer and old veteran of the Libyan army who joined rebel forces as a volunteer.

"All of the army, I am sure, don't like Moammar. They are just following orders and after a little fighting they run away," he said, explaining the victory of a rag tag mixture of professional soldiers and enthusiastic volunteers riding in trucks with machine guns bolted on the back.

There has been little sign of the creaky armored vehicles the rebel army paraded around in the eastern cities after Gadhafi's forces fled.

The rebel forces, for all their apparent disorganization and spontaneity that would seem to be disastrous for purposes of military strategy, do seem to have momentum on their side.

The swift advance and comparatively light casualties suggest that, at least for now, government troops are not offering a great deal of resistance.

"He has planes and bombs but I have a strong heart and I am defending my land," said Capt. Abdel-Hamid Ali, while his fleet of six pickup trucks pulled over at a rest stop in the grim, featureless desert.

Ali, who had no obvious rank insignia and wore wraparound sunglasses, camouflage pants, a down vest and a green army sweater, estimated that there were just 500 rebel forces involved in the push westward, but could not say when the next move would come.

"I am awaiting orders," he said, waving his ancient Nokia mobile phone in a desert country with often patchy reception.

North Africa, and especially the Libyan desert, has witnessed lightning campaigns before. In World War II, Allied and Axis forces fought years of seesaw battles across these same grim deserts, with the victors often being pushed back after overextending their supply lines.

The rebels are traveling light in their pickup trucks, but it remains to be seen if the apparent organized chaos of their advance can be sustained until the stronghold of Sirte.

The town of Bin Jawad lies almost between Ras Lanouf and Sirte and was supposed to be the limit of the army's advance. As we drove in, however, it seemed a quiet, eerie place without any of the revolutionary excitement further east.

A trailer on the edge of town was burning fiercely for no apparent reason.

Residents were shifty and just answered that the road was clear up ahead, insisting that no one had seen forces from either side.

"The people here are frightened, they are still afraid of Gadhafi," said Ibrahim al-Gouri, a Benghazi resident traveling in our car. "They would raise up the green flag if they had to," he said, referring to the Libyan government standard.

We had reached the edge of Libya's popular uprising and it was time to turn back and find the rebels.

Back in the landscaped grounds of the Ras Lanouf oil facility, whose foreign workers had been evacuated long before it became the front line, soldiers and volunteers lounged in grass, firing off occasional celebratory vollies.

They boasted about heading off immediately for Sirte or even all the way to the Tunisian border in the far west.

Ali Suleiman, a 34-year-old volunteer from Benghazi with a college degree, however, thought perhaps it was time to take a break.

"We will rest for a while and then we will advance, all the way to Sirte and Tripoli," he said, wearing mirrored aviator sunglasses, a leather jacket and an Arab-style scarf dyed different colors on his head.

The laid back atmosphere evaporated suddenly with shouted orders on a truck carrying a loudspeaker to withdraw troops to an earlier checkpoint. Cars revved up and rebels jumped into the back of pickups.

The reason soon became apparent with the sound of a jet overhead, evoking everyone's fear of the unstoppable air strike.

As our car raced back, the rebels opened up, perhaps futilely, with their heavy caliber anti-aircraft guns bolted to their trucks, against the unseen jet far overheard.

A few hours later we heard that rebel forces had finally reached Bin Jawad, and were continuing to advance.

Schemm has been reporting on the rebels in Eastern Libya for nearly two weeks.