Inside a troubled fundamentalist Mormon sect

As Warren Jeffs sends a bizarre doomsday warning to Obama from jail, we look at the continuing strife of the FLDS 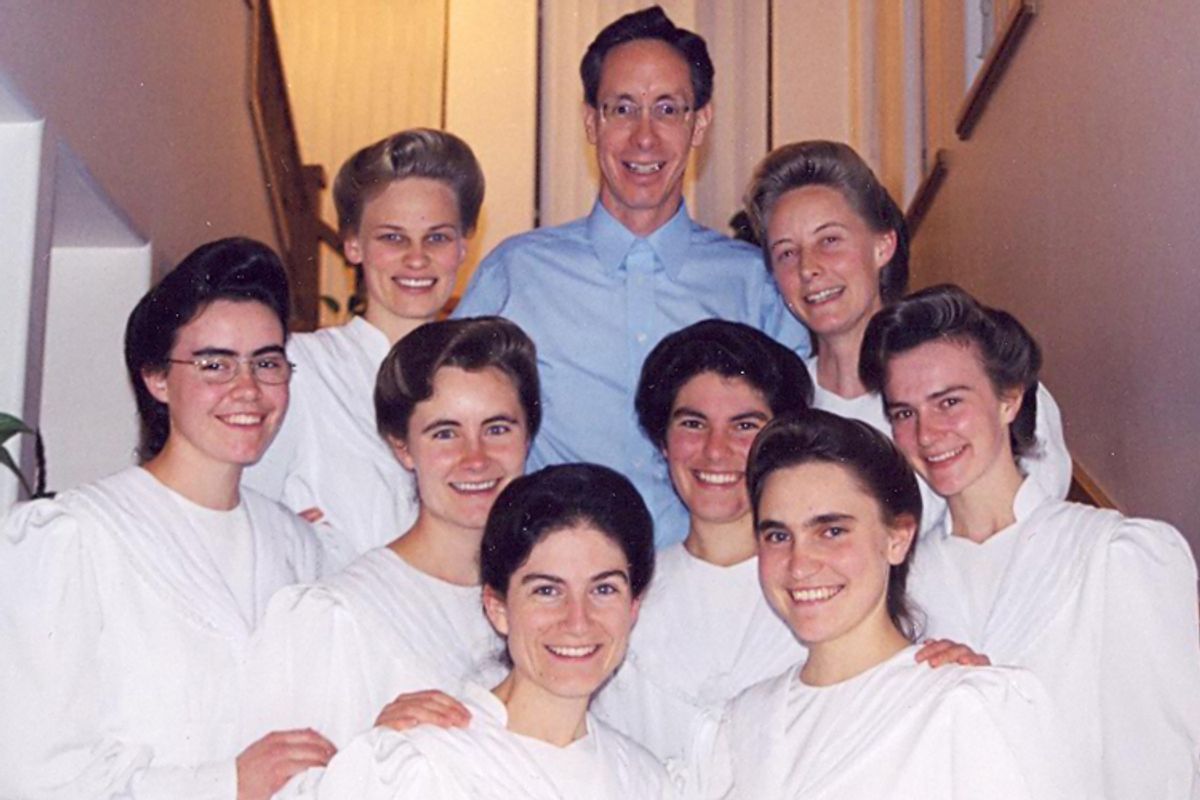 Warren Jeffs with his many wives
--

These are tough times for America's most infamous polygamous sect. Their prophet, Warren Jeffs, has been slinging orders to his people like lightning bolts -- from a pay phone in his jail cell. Followers have been told to rebaptize, to regulate their sex lives and to build, build, build as he prepares them for Zion and the end of the world. Three years after the raid that brought his fundamentalist Mormon sect to national attention, Jeffs is suffering the consequences of incendiary evidence seized by authorities, but it's his followers who are suffering the wrath. As Isaac Wyler, one of the church's most vocal apostates, says: "He's a madman."

As Jeffs awaits trial on child sexual assault and bigamy charges in West Texas, members of the Fundamentalist Church of Jesus Christ of Latter Day Saints, or FLDS, are struggling to pay his thousands of dollars in attorney fees. They live in poverty and suffer his condemnation but don't ask questions because they believe Jeffs holds the key to Zion. A rambling 900-page warning recently sent from Jeffs to President Obama may signal his desperation.

The bizarre proclamation landed on the desks of at least 600 heads of state two Fridays ago. It's titled "A Warning to the Nation" and in it, Jeffs, a self-proclaimed prophet, challenges the U.S. government. He says God has planned a holocaust of judgment for America worse than any WMD. "Let my people go," he threatens ... or else. He also wants to be let out of jail so that he can plan for the end of the world. The letter, which weighs three pounds, was signed by thousands of church members, including children as young as 8 years old. In it, Jeffs promises God will destroy the "wicked" with a devastating earthquake -- a "shaking of the earth in a place in thy land not known as a usual place of violent shaking unto the loss of many lives." That place? President Obama's home state of Illinois. When? Soon. To add intrigue, Jeffs, who claims he prophesied Hurricane Katrina, says that if the earthquake doesn't work, God will send "a great storm to thy land crippling thy nation again."

Jeffs may think he has superpowers, but the Texas justice system is his kryptonite. This summer, he goes on trial on charges of sexual assault on a child and bigamy. He's told his followers that if he's convicted the jail walls will crumble. But for now, Jeffs spends much of his time on a pay phone nailed to his solitary cell, using calling cards bought in the prison commissary.

He's a "paranoid schizophrenic," said a Texas Ranger investigating the case, who asked not to be named. "And he's freaking out about losing control of his people." In just a few weeks, Jeffs has gone on a rampage, kicking out at least 40 of his most pious men. One of those faithful is Merril Jessop, a 70-year-old FLDS bishop. Another is Wendell Nielson, the first counselor in the Quorum of the First Presidency. Still another is Willie Jessop, a man who has been described by followers as Jeffs' "bodyguard."

I began looking into Jeffs and his latest antics while reporting on a recent story for HDNet's television magazine show "World Report." Since then, I haven't stopped. The plight of these people gets under your skin -- and their saga keeps getting stranger. My conversations with Texas Rangers and ex-FLDSers convinced me that some of those still inside the religion are petrified to leave. (None will speak on the record, though I have spoken in passing with them many times.) They tell family members on the outside that recent Sundays have been agonizing. Their stories paint a picture of hundreds of FLDS faithful bunched around speakers to hear their president and prophet preach to them from his jail cell telephone. He's been known to make them wait hours for his voice. Insiders say they sit silently in worship, hands twisting. Since their prophet can't be with them, pictures have been made up of Warren Jeffs dressed in prison garb with a phone in his hand. My producer saw it on a wall in an FLDS construction company office. They only let her in because she had to use the restroom.

The FLDS are certainly unaccustomed to such interaction with strangers. Nearly 100 years ago, the FLDS scattered to the border of Utah and Arizona, and established an enclave called Short Creek. Here, they lived for decades, unbothered and under the radar from state laws banning polygamy. Jeffs announced he was the prophet after his father, Rulon, died in 2002. It didn't take long after that for Jeffs to reveal that he and God were talking. In 2004, Jeffs told his people the Lord wanted him to lead a migration of believers from their home in Short Creek to an isolated acreage in West Texas, now known as the Yearning for Zion ranch. It was to be the country club of the FLDS, reserved only for the most righteous. Here, the holiest of men could raise their families of multiple wives and scores of children. "This is a testing ground for the saints," Jeffs told them seven years ago. "The Lord wants us to conquer this ground to prepare ... because soon, the wicked will be swept off the land."

But the FLDS has struggled since the YFZ ranch was raided by Texas authorities on a long April night three years ago. That raid introduced the world to women in prairie dresses, crying as their children were removed from the compound by the hundreds. Jeffs mentions the incident in his latest revelation, admonishing Texas lawmen for their part in it: "You carried away my innocent children from among my people in a raid that was unjust." (Indeed, the raid did come under scrutiny, since the call that prompted it proved to be a hoax.) The investigation that resulted from that raid, however, was fruitful for Texas authorities. On the grounds of the 1,700-acre ranch, they discovered a mother lode of evidence that would be used against the Saints. They found wedding pictures in the homes of older men with their underage brides. There were medical records that indicated babies were being born to these girls, and DNA provided the surefire proof. Seven of 12 men arrested as a result of that evidence have been convicted of either sexual assault on a child or bigamy. But Jeffs is the big fish Texas wants to net.

Originally on the FBI's Ten Most Wanted list and on the run for his part in arranging child bride marriages, Jeffs was picked up by the Nevada State Patrol just outside Las Vegas on a routine traffic stop and convicted in Utah. That sentence was overturned last summer by the Utah Supreme Court. But this December, he was extradited to Texas for marrying the girls himself. The pictures that law enforcement procured from the YFZ ranch are startling: In one, a smiling couple anticipates a life together just like any newlyweds, except the man is old enough to be the bride's grandfather. The 50-year-old Jeffs, at 6 foot 4, leans lovingly, his long arms encircling a tiny, freckled redhead in a lavender frock. Law enforcement sources say the girl had just turned 12 when she and Jeffs were "sealed" in celestial marriage. One of Jeffs' best-known dictations shows up in Texas court records. On July 27, Jeffs discusses giving his young daughter and a friend's daughter to another friend's two grown sons in exchange for the young redhead. Of his tender prize, he says: "I explained that the Lord wanted this young lady to be sealed to me to carry on in her training, even to witness great things in the Lord ... and there was sealed M____ Jessop to Warren Steed Jeffs. That's me!"

To Texas prosecutors, Jeffs is nothing more than a pedophile who uses God's word as an excuse to do whatever he wants. To his people, he is hope. "He is everything," said a young man working on a roof. The man looked like a young Ricky Schroeder with flyaway blond hair. Later, I discovered he was one of Warren Jeffs' sons, Rulon, named after his grandfather.

There may be as many as 10,000 FLDS in the United States, Canada and Mexico. Short Creek is still their hub, and it is, at first glance, not a bad place to raise a child. Outside influences like Sponge Bob and rock music are forbidden here. I watched FLDS children ride horses to get where they're going. They eat homemade bread, hang upside down from trees and laugh in the fresh air. The bigger ones lead the little ones by the hand, and there are so many brothers and sisters there's no room for whining for more of this or that. But beyond this bucolic scene, is a troubling tale of a life that is not so easy. Isaac Wyler, who left FLDS seven years ago, says these perfect children are being raised for a life of servitude: the boys to work hard labor and the girls to be child-bearers. Wyler says he was once one of them. "I started work repairing roofs when I was 8 years old," he says. "I was so little, my hammer dragged the ground!"

Outside the general store, exhausted women walk three at a time up the sidewalk carrying bags of rice and flour. They pad about in their tennis shoes, drive minivans, and pull out their cell phones to talk and text, just like any suburban housewife. But unlike the rest of us, they are convinced that this mundane life is short, for Jeffs is leading them to an exalted place where we will never go: Zion. A detective close to the case tells me special storage units have been built around town to house huge wheels, mountains of rebar and planks of wood to be turned into roads for the day the earth is destroyed. In Jeffs' "Warning to the Nation," he tells President Obama "Repent ye! Repent ye! My day of judgments upon all the earth is at hand."

As Jeffs threatens the president and cleans house, and as the laws of celestial marriage bump against the laws of the land, it's possible this might signal a new chapter in the lives of the Saints. You have to wonder, what will his followers do when they realize God is not letting Jeffs out of jail ... and the earth keeps turning without interruption?

Carol McKinley has been a national correspondent in the Rocky Mountain region for 15 years. She currently reports and produces mini-documentaries for HDNet's World Report.