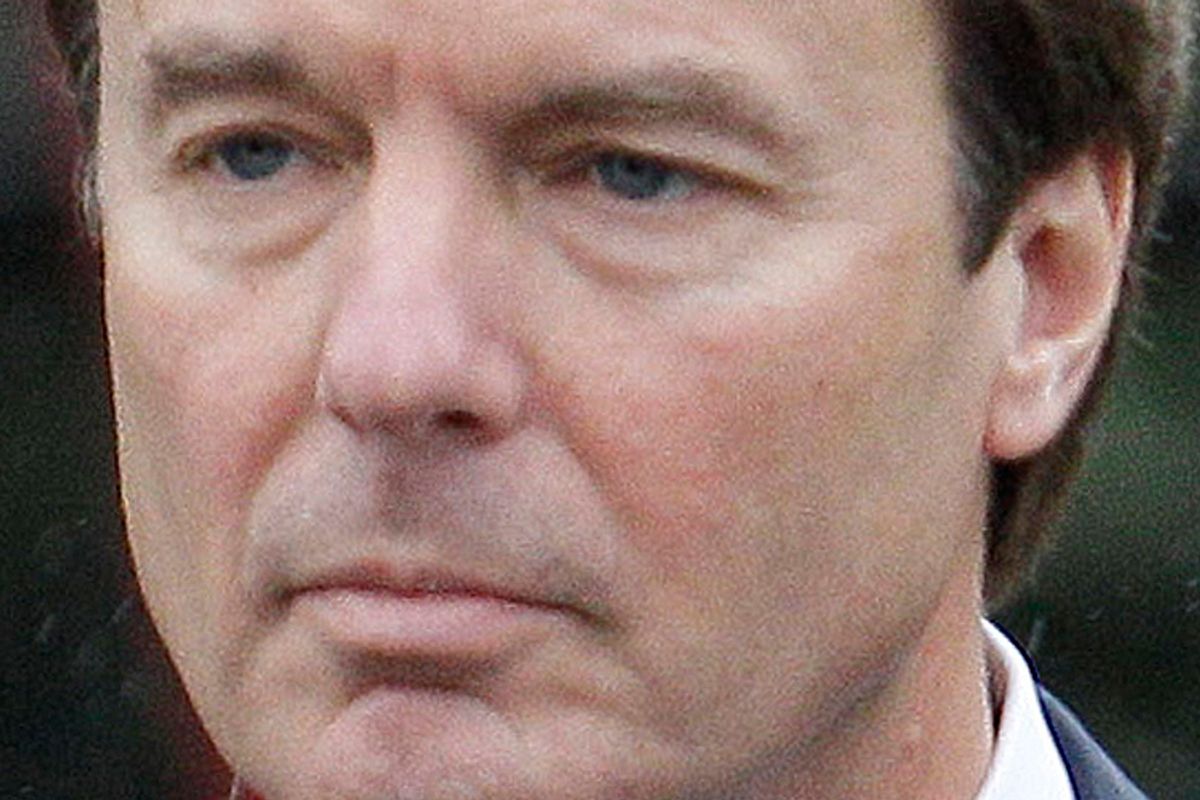 It's hard to imagine the stock of John Edwards falling any further.

But with a federal grand jury now wrapping up an investigation into possible misuse of campaign money to coverup Edwards' affair with Rielle Hunter, there's still a real chance that the former senator and vice presidential candidate could be hit with criminal charges.

The grand jury has been meeting in a federal courthouse in Raleigh, N.C., for a full two years. Prosecutors and jurors operate in strict secrecy. But in the last week, a few significant developments have emerged in the case: First, it was reported that Edwards hired Greg Craig, the big-name Washington attorney who recently served as President Obama's White House counsel; second, the North Carolina ABC affiliate WTVD released voice-mail messages from Edwards that show his communication with key players in the case in 2007 and 2008; and, finally, multiple media outlets reported that a decision on an indictment is expected soon.

I caught up with Steve Daniels, the North Carolina ABC reporter who broke the voice mails story, to talk about the status of the investigation, what laws might have been broken, and the chances that Edwards will be indicted.

What follows is a transcript of our conversation, edited for length and clarity:

So what do we think the prosecutors are looking into ?

A federal grand jury in Raleigh has been investigating this whole scandal since January of 2009. The key question is, were campaign finance laws broken? What did John Edwards know about the people who were funding the coverup, primarily Bunny Mellon and Fred Baron? According to [Edwards aide] Andrew Young, Fred Baron, who was a wealthy Texas trial lawyer, used his personal fortune to help fund the coverup of the Rielle Hunter affair and the baby. And Mellon, according to Young, sent $700,000 in personal checks hidden in candy boxes to help fund the coverup. Young says he used that money to keep Hunter in hiding.

Another key question is, what did John Edwards know about the use of that money? Did he know that these donations were being used to help hide the affair? In an interview with ABC News, John Edwards said that if anybody donated money, he was unaware of it. What the new voice-mail messages seem to suggest is, he was in frequent contact with Fred Baron and with Bunny Mellon, and may have known about their involvement in the coverup. Andrew Young says very definitively that he was working at the direction of both John Edwards and Fred Baron. If that is the case, that could be a violation of federal law.

Would the money somehow have to be considered campaign donations for this to matter?

That's where the gray area is. If these people gave a donation to someone who was running for president, but not directly to the official John Edwards 2008 presidential campaign, there could still be a violation of campaign finance law -- even though the money was not directly in that Edwards for President kitty. The violation of law would be taking a donation and using it for something other than funding the campaign. I've been told by people close to the case that the key point there would be that the coverup was central to electing John Edwards president. Absent his run for president, there wouldn't be a campaign finance law violation.

Do we know anything about how the money was allegedly used?

Young says that there may have been as much as $1 million spent on the coverup. They were flying around the country in private planes. They were living in California in a house that cost about $20,000 a month to rent. There was a lot of money spent on their life in hiding while Young claimed paternity. The question is, was that money spent to further Edwards' presidential aspirations?

You obtained a set of voice mails that were kept by Young and also turned over to the grand jury. What do we learn from them?

The voice-mail messages appear to back up Andrew Young's assertion that Edwards knew about the money and how the money was being used to hide the affair. Edwards was in frequent contact with Mellon, Baron and Young, and keeping tabs on the whole coverup. That appears to be clear based on the voice-mail messages. We don't have any voice mails where John Edwards says, "Fred, I need $500,000 more to hide this affair." There's nothing as direct as that. But we do know that Edwards was in contact with these people who were donating money to hide the affair. Previously Edwards has said, if they were donating money he was unaware of it.

How extensive has the investigation been?

There have been two separate groups of grand jurors who have met on this. The first group's term expired, and a second group is now hearing evidence. Things seemed to take a turn in December and January. In December, Bunny Mellon's son and grandsons flew to Raleigh on Bunny's private jet and provided testimony. A month later, Lisa Blue, Fred Baron's widow, was called to testify as well. So there seems to have been a focus by prosecutors recently on the people surrounding those campaign contributions.

Federal prosecutors took a very interesting step in early February: They sent a letter to Mellon's lawyers asking her to submit to recorded testimony at her home. She's 100 years old. Prosecutors wanted to record her testimony and to allow Edwards' lawyers there to cross-examine her. They were concerned about her advanced age and wanted to get her on the record before something about her state of affairs changes. That's very unusual to interview a witness pre-indictment. That, I think, tells you a lot about Mellon's money and how critical it is to the case.

What do we know about where things stand right now?

Lawyers close to the case say that the grand jury investigation is completed and the investigation of the case really is in its final stages. Greg Craig, the high-profile Washington lawyer, was brought in, and that could mean two things. It could mean that he is trying to put pressure on the Justice Department not to move forward. It could mean that they're potentially negotiating some kind of plea deal. We don't know. But generally in these high profile political corruption cases, it goes beyond just the U.S. attorney's office in the locality. It would have to go to the Justice Department for a review. The conventional wisdom here is that because the grand jury investigation is winding down and because of the people they've heard from, that the prosecutors feel confident that they have a case they can make.