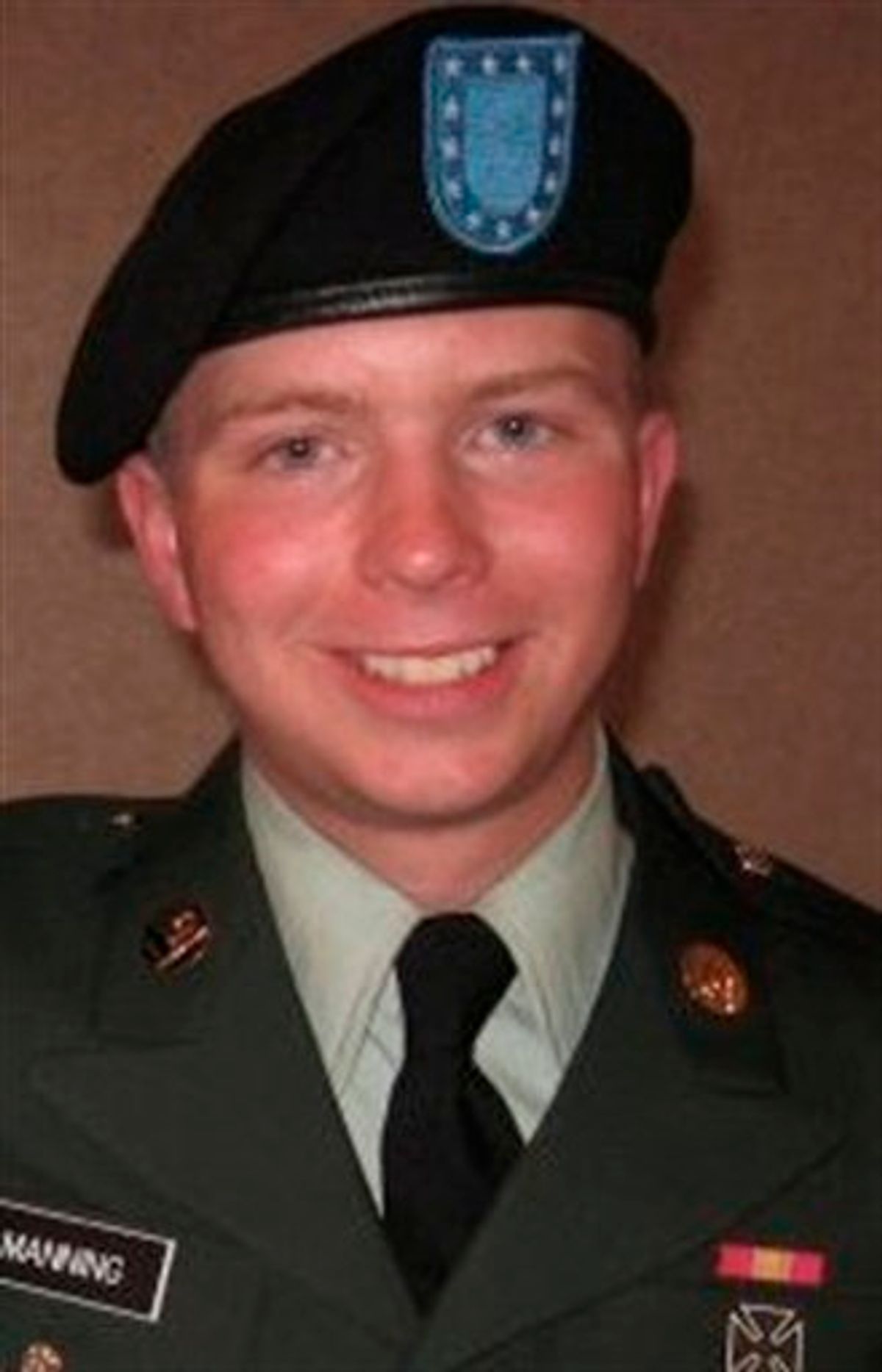 FILE - This undated file photo obtained by The Associated Press shows Bradley Manning, the U.S. Army private suspected of being the source of some of the unauthorized classified information disclosed on the WikiLeaks website. Manning's civilian attorney David Coombs said Wednesday, March 2, 2011, that the new charges announced by the military are not unexpected. The 22 new charges include "aiding the enemy," which is a capital offense although prosecutors say they won't seek the death penalty. (AP Photo, File) (AP)
--

The Army private suspected of giving classified U.S. documents to the anti-secrecy group WikiLeaks was stripped of all clothing for two nights to keep him from hurting himself in his military jail cell, a Marine Corps spokesman said Friday.

The brig commander issued the order Wednesday, the same day Pfc. Bradley Manning was hit with a new charge -- aiding the enemy -- that could carry the death penalty.

"There can be no conceivable justification for requiring a soldier to surrender all his clothing, remain naked in his cell for seven hours, and then stand at attention the subsequent morning," Coombs wrote on his blog.

"The circumstances required that his clothing be removed as a precaution to ensure that he didn't harm himself," Villiard said.

Villiard said privacy rules prevented him from discussing the circumstances that prompted the order but he added, "I can tell you that this was event-driven."

Manning, a former intelligence analyst, has been in pretrial confinement since his arrest in Iraq in May. He is charged with 34 offenses for allegedly stealing computer files of more than 250,000 confidential State Department cables, classified video of a deadly U.S. helicopter attack and a plethora of Iraq and Afghanistan war logs. The video and thousands of the documents have been published on the WikiLeaks website.

The 23-year-old from Crescent, Okla., was taken to Quantico on July 29. He is in maximum custody and on prevention-of-injury status -- designations that keep him confined alone 23 hours a day, and require removal of all clothing except his boxer shorts at night.

On Wednesday, the Army announced 22 new charges including aiding the enemy. The charge is punishable by death but prosecutors have said they will recommend that the charge be sent to trial as a noncapital offense.

The Navy Corrections Manual, which governs Quantico brig operations, permits clothing removal for prisoners who have threatened suicide or made a suicidal gesture, or for strip searches involving suspicion of a crime.

Villiard said Manning was not placed on suicide watch this week but he has been in the past.

On Wednesday, the government issued a preliminary denial of Coombs' January complaint seeking to have Manning's custody status reduced from maximum- to medium-security. Manning said he will file a rebuttal next week, and then await reviews by Quantico commander Col. Daniel J. Choike and the Navy secretary.

U.S. Rep. Dennis Kucinich issued a statement saying the clothing-removal order could amount to cruel and unusual punishment and may violate international law.

"Is this Quantico or Abu Ghraib?" the Ohio Democrat said, referring to detainee abuses at a U.S. military prison in Iraq in 2003.

The United Nations torture investigator is pursuing an inquiry into Manning's confinement, based on allegations by a Manning supporter.