Karzai says civilian casualties are no longer an acceptable consequence of U.S. occupation 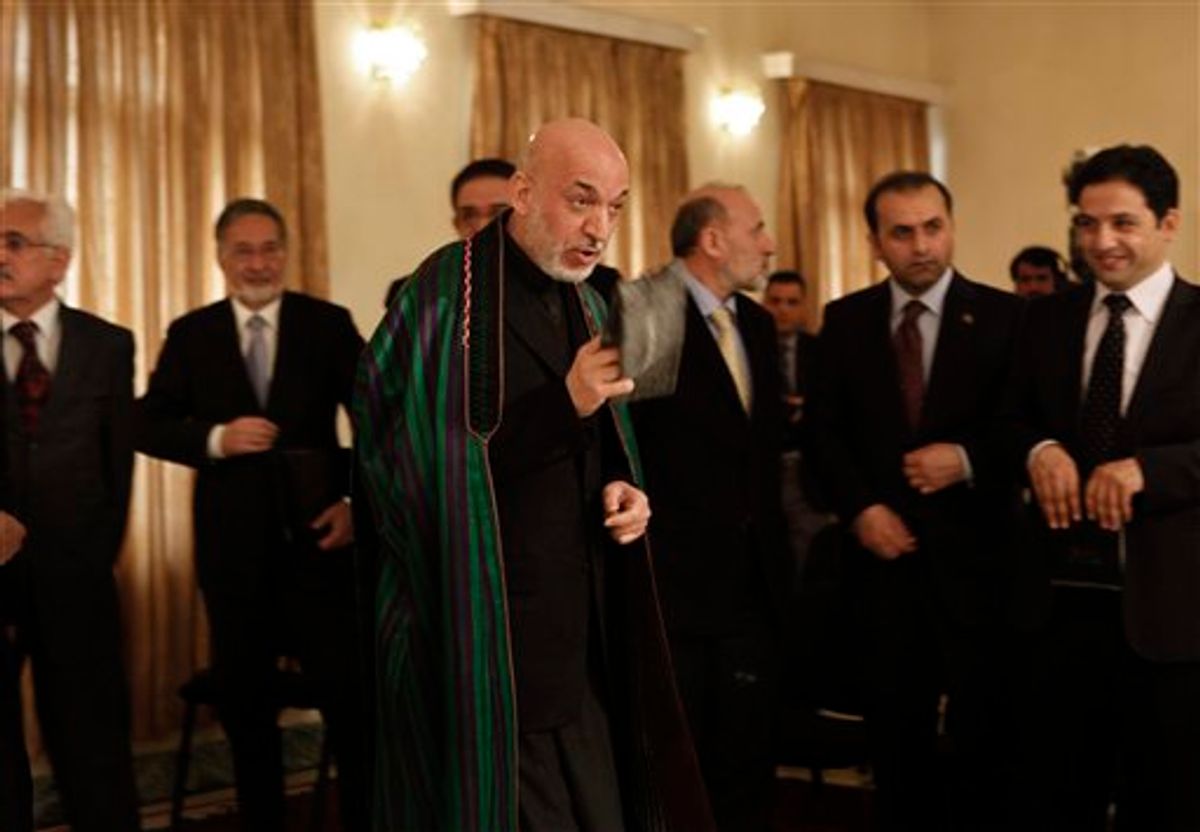 Afghan President Hamid Karzai, center, gestures towards journalists during joint press conference with Croatian counterpart Ivo Josipovic, not in picture, at The Presidential Palace in Kabul , Afghanistan, Saturday, Feb, 19, 2011. Afghanistan's president says any decision on a permanent U.S. military presence in the country must be made by Afghans and take into account the concerns of neighboring countries. (AP Photo/Dar Yasin) (AP)
--

Afghanistan's president on Sunday rejected a U.S. apology for the mistaken killing of nine Afghan boys in a NATO air attack and said civilian casualties are no longer acceptable.

According to a statement from his office, Hamid Karzai told Gen. David Petraeus, the top commander of coalition forces in Afghanistan, that expressing regret was not sufficient in last week's killing of the boys, ages 12 and under, by coalition helicopters.

NATO has also apologized for the mistaken killings. Civilian casualties from coalition operations are a major source of strain in the already difficult relationship between Karzai's government and the United States, and they generate widespread outrage among the population.

"President Karzai said that only regret is not sufficient and also mentioned that civilian casualties during military operations by coalition forces is the main reason for tension in relations between Afghanistan and United States," the statement said. "It is not acceptable for the Afghan people anymore. Regrets and condemnations of the incident cannot heal the wounds of the people."

The killing of the nine boys took place on March 1 in the Pech valley area of Kunar province in eastern Afghanistan.

In the video, Rodriguez said troops at a base in the valley were responding to a rocket attack and dispatched attack helicopters to the location they were told the rockets came from. He said the helicopters thought they were engaging insurgents, but it later turned out they were boys from a nearby village who were cutting firewood.

Karzai appealed to Petraeus to do more to prevent such incidents. He made the remarks to Petraeus during a Sunday meeting of the National Security Council, a body that includes Cabinet members and senior political and military officials.

According to the statement, Petraeus said during the meeting that the killing was a mistake by coalition forces and extended his condolences and regret to Karzai and the Afghan people, promising that such an incident will not be repeated.

NATO operations against insurgents in eastern Afghanistan have caused friction with the Karzai administration in recent weeks after government charges that the military has caused a number of civilian deaths and casualties.

Earlier this month, the Karzai administration claimed that 65 civilians, including 40 children, were killed in a NATO assault on insurgents in Kunar. NATO has said that video of Kunar operations on Feb. 17 -- the main event of more than three days of fighting -- showed troops targeting and killing dozens of insurgents, not civilians.

Civilian deaths have jumped this year primarily because of increased attacks from insurgents, according to U.N. data. Insurgents recently have started carrying out indiscriminate attacks against soft targets such as banks, supermarkets and sporting events.

But allegations of civilian deaths from NATO forces -- who pledge to protect the population -- often cause much more anger.

Hundreds of people from a left-wing political party marched through Kabul to protest U.S. military operations and demanded the withdrawal of foreign troops.

They chanted "death to America, death to the American government" and carried pictures of Afghans killed or wounded in recent airstrikes. They burned an effigy of Obama.

Violence has been on the rise in eastern Afghanistan and earlier in the day a roadside bomb killed 12 civilians, including five children, in Paktika province.

A spokesman for the governor of the province, Mokhlis Afghan, said another five people were wounded when the bomb planted by insurgents exploded next to a truck carrying civilians.

Paktika borders Pakistan's lawless tribal areas, used as safe havens by insurgents fighting U.S.-led coalition troops in Afghanistan. Insurgents regularly cross the rugged frontier to attack coalition forces and the region has seen an increase in fighting, as well as a rise in casualties.