Dukakis on Obama, Palin and what might have been 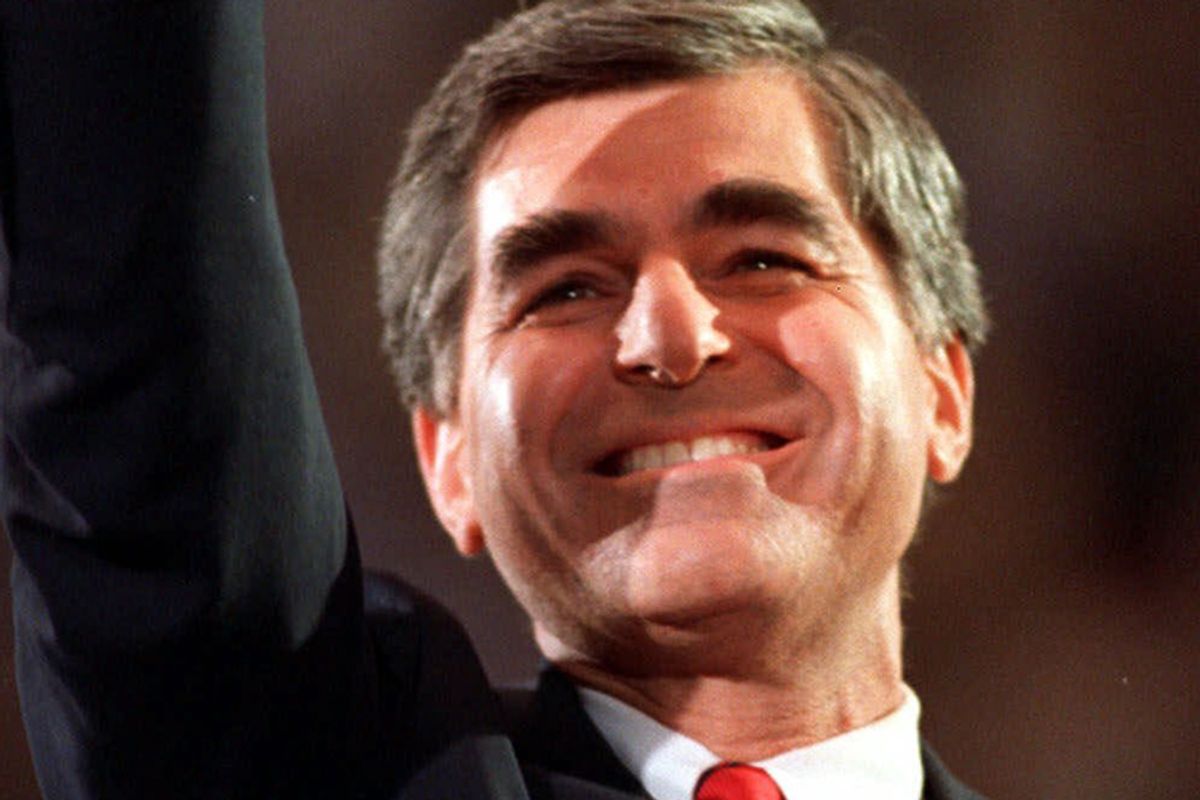 It turns out that one of the first people to figure out that George H.W. Bush's famous "Read my lips: no new taxes" declaration would come back to haunt him in 1992 was Michael Dukakis -- who came to the realization in December 1988, just a month after losing the presidential election to Bush.

"He really didn't believe it," he recalls. "He and I met in early December (after the election), at the vice president's house. He was nice enough to invite me down."

During their campaign, Dukakis had brought up a contentious issue -- more vigorous enforcement by the IRS -- and in their post-election meeting pointed out to Bush that the proposal could raise $110 million immediately.

"He said, 'I really have to talk to Jim -- meaning Baker -- about this, because if I raise taxes my first year, they'll kill me.'

"So, I'm sitting there," an amused Dukakis continues, "still somewhat bruised, and I'm listening to this guy who's been going all over the United States telling people to read his lips, and I'm thinking, 'This guy thinks his commitment is for 12 months!

"Well, I didn't say anything -- the election was over. Well, by God, he raised them his second year, and we all know what happened."

More than two decades after the Democrats' 1988 standard-bearer suffered a shellacking, to use the in-vogue term, Dukakis is both self-effacing about the shortcomings that led to his national defeat and passionate about the ways he believes the Democratic Party can "focus on connecting with an overwhelming majority of Americans that seem to agree with us on fundamental issues, but are voting for other people."

The former Massachusetts governor (he held the post for three terms between 1974 and 1990) spoke with Salon about topics past and present in a wide-ranging interview in his office at UCLA, where he spends his winters as a visiting professor of public policy. (He and his wife, Kitty, spend the rest of the year back in Brookline, Mass., in what he describes as "the governor's mansion -- half of a brick duplex.")

For Dukakis, now 77, the loss to Bush represents both a personal failing and a simple miscalculation. It also serves as a Rosetta stone for understanding the successes and failures of his party nationally ever since.

Of the Bush campaign's sharp attacks -- which were punctuated by the notorious "Willie Horton ad" -- that helped erode what was once a 17-point lead for the Democrat, Dukakis now says, "I did a lousy job of dealing with that. The first big mistake I made was making a decision I wasn't going to respond to the Bush attack campaign. You cannot do that. Now, how you do it, how you turn an attack campaign into a character issue on the guy that's doing it -- which, ideally, is the best way to deal with it -- it's not easy."

Dukakis is quick to point to the successes enjoyed by both Bill Clinton and Barack Obama -- and just as quick to contrast them with his own shortcomings. He credits Clinton with countering attacks far more intense than the ones he faced, and points out that Obama gave as good as he got in 2008.

"When you say to me, 'What were you thinking?' " Dukakis says, then pauses, shrugging his shoulders and seemingly incredulous at the thought that he unilaterally disarmed against Bush. "I don't know. I'm a positive guy, I tried to run a very positive campaign in the primary, I thought people were tired of all the polarization we were getting under Reagan -- but, in retrospect, to let Bush get away with all that stuff was just ridiculous, and nobody's fault but my own."

That you're likely to hear a similar lament from Democrats in 2011 is just one example of how Dukakis believes his party -- and his country -- is guilty of ignoring history. He points to failure to organize a genuine grassroots campaign at the precinct level in '88 -- even though that kind of organizing had been crucial to his successful campaign to win back the Massachusetts governorship in 1982 -- and argues that Democrats made the same mistake in last year's midterm elections, despite Obama's own success with grassroots organizing in 2008.

"Look at the congressional races," he says. "How many candidates of my party did serious, precinct-based campaigns? Damn few of them. Which is one of the reasons why we got skunked. Now why, after Obama's brilliant demonstration of how effective this was in '08, every single Democratic member of Congress wasn't out there developing a precinct-based organization -- and as I've said a million times, it's not rocket science; it's a precinct captain, and six block captains in every precinct, making personal contact with every single voting household -- why didn't they do it? You've got all these consultants running around, who have never rung a doorbell in their life, and they don't seem to take it seriously."

It is fascinating to consider what a Dukakis victory in 1988 might have done to the trajectory of modern political history -- and, as the man himself concedes, it probably wouldn't have been pretty for his party, at least in the short term.

"Would we have gone into a recession, even if I'd been elected?" he asks. "Probably. I mean, the seeds were sown under Reagan. How can you have an economic policy like Reagan's and not confidently predict there's going to be a recession afterwards? If I'd been elected, we'd certainly have attacked the economic issues largely as Clinton did. With considerable success."

In other words, the immediate political result of a Dukakis presidency might have been an acceleration of the "Republican Revolution," in which the GOP swept to power in the House for the first time since the Eisenhower era. Instead of playing out in the 1994 midterm elections under Clinton, it might have occurred in 1990 under Dukakis.

In the public mind, Bill Clinton represented a break from Dukakis' liberalism, but Dukakis says his administration would have looked a lot like Clinton's did.

And maybe -- just maybe -- he could have gotten such a plan through Congress, which two decades ago was still populated with a chunk of moderate, pragmatic Republicans, like the late Rhode Island Sen. John Chafee. The more ideologically dogmatic GOP of today, Dukakis notes, "isn't exactly Chafee and company," but he still thinks it's worth it for Obama to reach across the aisle.

"You make the effort," he says, "and if folks just don't want to sit down and come to a reasonable conclusion, you just go out and say, 'The single most important priority is getting this economy back on track and getting people back to work, and what these guys are doing is going to have a profound effect on that."

Of course, this isn't to say that Obama shouldn't also begin defining the Republican opposition now in advance of next year's presidential race. Dukakis suggests that Obama steal a page from the playbook of Clinton, who began running television ads in the summer of 1995.

"I mean, [Clinton] had poor Dole on the floor, bleeding, a year in advance," Dukakis says. "I think, given the opposition he's likely to face, the corporate money pouring in, I'd make it an issue. I'd make the Koch brothers an issue -- where's that money coming from? I'd turn that into a plus, and early."

Ask him about the Tea Party and the woman who is arguably its most prominent public face -- Sarah Palin -- and Dukakis reacts with bewilderment.

"I just don't know," he says. "I was asked to sit on a panel with a young Tea Party guy. And it was the first chance I had to sit down and listen -- much of what he said was just factually inaccurate, didn't make a lot of sense. And I'm somebody who's a great believer in sitting down with folks. But I think you have to lay out the facts, see if you can get agreement on, if not the facts, at least on the problem."

He does, however, see a potential silver lining for Democrats in the emergence of the Tea Party.

"It may get them into very big trouble politically, come 2012," he says. "If [Palin] gets nominated, and she gets badly beaten, as I suspect will probably happen, then the Republican Party has no one but itself to blame."

Nor does Dukakis have much regard for the nominal GOP frontrunner, Mitt Romney, his fellow former Bay State governor.

"Remember, he was governor for about a year and a half, effectively," Dukakis says. "I don't know what to say about Romney. He isn't his old man (former Michigan Gov. George Romney), I'll tell you that, who I thought a lot of. I don't know what motivates Romney -- what his pollster told him last night?"

He's also unimpressed with Indiana Gov. Mitch Daniels, who is now being touted as something of a pragmatic GOP dark horse.

"Some reporter called me and said, 'This guy Daniels, he's emphasizing competence.' And I said, 'Wasn't he George [W.] Bush's OMB director his first two years? Wasn't he the architect of this crackpot fiscal policy that now has given us a $14 trillion national debt? I mean, he's a bright guy, I like him, but give me a break, will you?"

What the precise outcome will be is anyone's guess, but next year's presidential election will end with only one winner -- and many losers, all of whom will suddenly have something in common with Dukakis. When he suffered his defeat in '88, Dukakis sought counsel from Walter Mondale, who had suffered an even bigger defeat as the Democrats' nominee four years earlier.

"It takes awhile," he says. "Fritz used to say that he'd wake up at 2 o'clock in the morning and he'd keep a stack of books next to his bed, and he'd just read. Look, it was very disappointing, and I was disappointed in myself. Because it was a winnable election, and I blew it."

Howard Megdal edits PerpetualPost.com.. He writes for Capital New York, The Journal News, MLB Trade Rumors and many others. His new book, Wilpon's Folly, will be published by Bloomsbury in December 2011. Follow him on Twitter @howardmegdal.