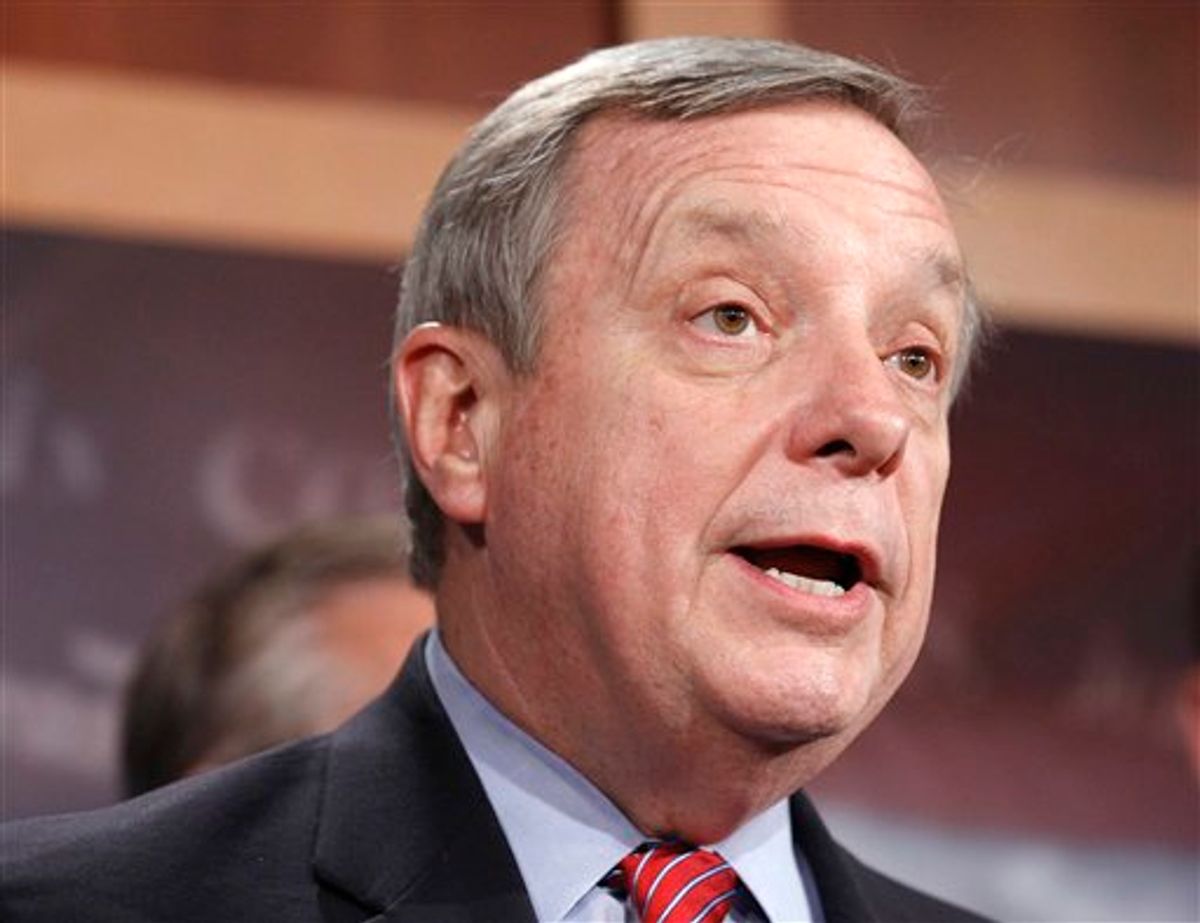 A leading Democrat predicted Sunday that the Senate would reject House Republicans' deep budget cuts, setting up tense negotiations and the need for another short-term spending measure to keep the government operating.

Illinois Sen. Dick Durbin, the No. 2 Democrat, contended that Republicans were unfairly and unwisely placing the burden of spending cuts on domestic programs.

"I'm willing to see more deficit reduction, but not out of domestic discretionary spending," Durbin said.

In response to a House-passed bill that would cut $61 billion from the federal budget, Senate Democrats put forward a measure that would trim just $6.5 billion from domestic agencies, as President Barack Obama proposed.

That would erase billions in cuts for education, housing and other programs sought by Republicans, but leave a massive gap between the two sides. Nonetheless, Obama's chief of staff, William Daley, said the White House and Republicans were not as far apart as the numbers would suggest.

"However you slice it, there is a challenge to our government," Daley said. The House and the Senate must agree on a budget, he added, "or this government doesn't fund itself and we look ridiculous."

Lawmakers appearing on Sunday's news programs traded charges of who was being more serious when it came to dealing with the nation's fiscal ills. There was little or no talk about how the two sides would reconcile the House bill with a starkly different measure expected to come from the Senate.

Senate Republican leader Mitch McConnell of Kentucky asserted that Obama was not serious about the spending and deficit issues even though he had had several discussions with the president.

"What I don't see now is any willingness to do anything that's difficult," said McConnell. "I've a number of conversations with people who count at the White House. And I think that, so far, I don't see the level of seriousness that we need."

Durbin said he hoped that, following a Senate vote on the budget, lawmakers could reach a bipartisan agreement.

"We need to get very serious, act like adults, sit down and not lurch from one week or two weeks to two weeks in funding our government," he said.

The chairman of the House Republican Conference, Rep. Jeb Hensarling of Texas, criticized Senate Democrats for offering a plan that "puts nothing on the table." Asked if he would accept less than $61 billion in cuts, he demurred.

"If that were to be, in fact, put in place, it would contribute to the reversal of our recovery. It might even destroy our recovery. It will certainly deny us the competitiveness that we need to move with China, India and other countries into the future," Kerry said.

Last week Congress passed a bill to fund the government -- a continuing resolution -- for two weeks, until March 18. Rep. Hal Rogers, R-Ky., the chairman of the House Appropriations Committee, said if a budget agreement were not reached by then, his committee would attempt to approve another short-term funding bill "to give the Senate time to act and the negotiators time to try to resolve the spending problems."

"We are determined not to have a shutdown," Rogers said.