Libya on the brink: Visualizing the conflict 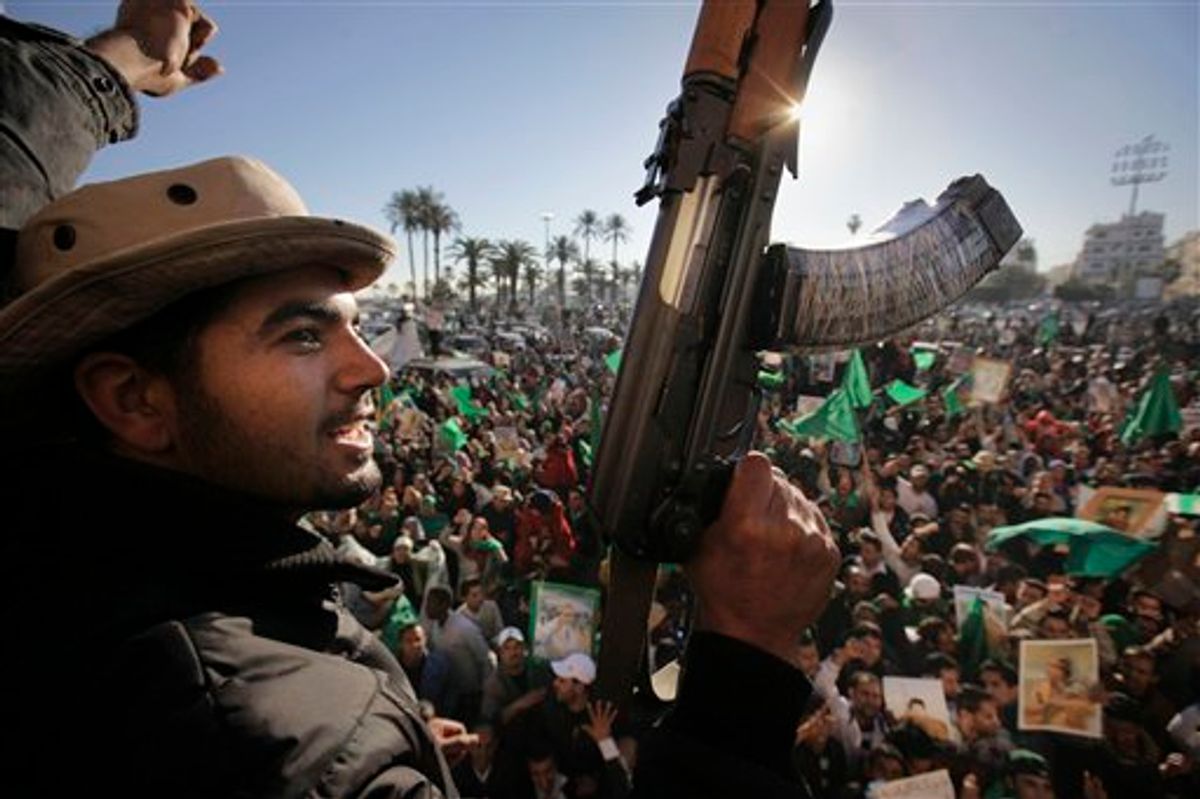 Libya is in flux. It's been weeks since protests first began and then escalated into a full-scale liberation movement. Very little is certain in the country, except that civil war appears imminent. Rebels armed with shoulder-mounted missiles and automatic rifles face off against a Libyan army with tanks, aircraft and heavy artillery. Battle lines are constantly shifting. And U.S. Secretary of Defense Robert Gates said last week that there's little hope for an immediate cessation of hostilities -- or, for that matter, the removal of dictator Moammar Gadhafi -- short of U.S. military intervention.

As the North African nation staggers toward what could be be a devastating civil war, we've collected a number of images from recent days to give you a glimpse at what's going on in Tripoli, Benghazi and other cities across Libya. Pro-Gadhafi soldiers and supporters gather to celebrate in Green Square, Tripoli on Sunday. Thousands of Moammar Gadhafi's supporters poured into the streets of Tripoli on Sunday morning, waving flags and firing their guns in the air in the Libyan leader's main stronghold, claiming overnight military successes. (AP/Ben Curtis) The children of an army soldier hold his guns in the air as pro-Gadhafi soldiers and supporters gather to celebrate in Green Square. (AP/Ben Curtis) An anti-Gadhafi rebel, left, stands next to his injured colleague who receives treatment from an ambulance worker after he was wounded during a fight against pro-Gadhafi fighters near the town of Bin-Jawad, eastern Libya, on Sunday. (AP/Hussein Malla) An anti-Gadhafi rebel holds his anti-aircraft missile as he looks to the sky, in the oil town of Ras Lanouf in eastern Libya on Sunday. (AP/Hussein Malla) Libyans inspects the site of massive explosion that occurred during the night in Benghazi. (AP/Tara Todras-Whitehill) A Libyan man mourns in front of the coffins of seven men killed in a massive explosion Friday night, during their funeral, in Benghazi. (AP/Tara Todras-Whitehill) Another man mourns during a funeral for those killed in the Benghazi explosion. (AP/Tara Todras-Whitehill) An anti Gadhafi rebel, takes up a position and holds his RPG as he shouts slogans after the capture of the oil town of Ras Lanouf, in eastern Libya. (AP/Hussein Malla) An Egyptian man, who used to work in Libya and fled the unrest in the country, salutes as he waits with other compatriots to board a German warship, not seen, to be evacuated to Egypt at the southern port town of Gabes, Tunisia, Saturday, March 5, 2011. A group of about 400 waited patiently to board three frigates for a three-day journey home to the Egyptian port of Alexandria. The German navy had set up an airport-style check-in at several stations on the dock: the refugees discarded their food, then registered their passports, took an ID number and a matching luggage tag, opened bags for inspection, had their temperature taken by a doctor and then climbed up the gangway. (AP/Lefteris Pitarakis) A refugee camp set-up near in Tunisia near the country's border with Libya. (AP/Emilio Morenatti) Anti-Gadhafi protesters run from tear gas fired by police as they tried to disperse the demonstration in the Tajoura district of eastern Tripoli. (AP/Ben Curtis) An anti-Libyan Leader Moammar Gadhafi protester prays as he holds the old Libyan flag, during the Friday prayer at the court square, in Benghazi. (AP/Hussein Malla)