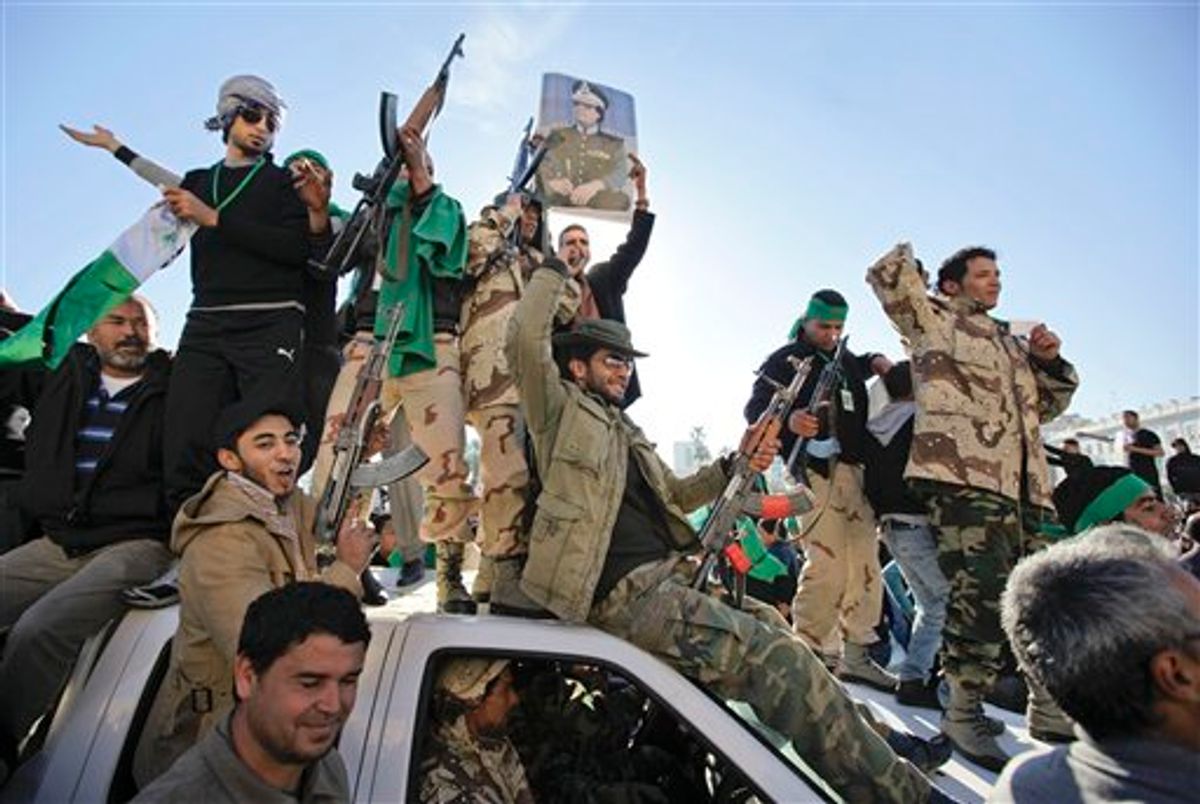 Witnesses say pro-Gadhafi forces have opened a new front in their counteroffensive against the opposition, shelling the downtown of a rebel-held city near the capital with mortars and tank artillery.

Misrata, 120 miles east of the capital Tripoli, is one of two cities in the western half of Libya that have fallen into the opposition's hands.

Witnesses say the shelling began at about 11:30 a.m. Sunday and the rebels were fighting back with rocket propelled grenades and anti-aircraft guns. Residents say the shelling almost completely ceased by early afternoon and there were no immediate reports of casualties or damage.

The residents spoke on condition of anonymity because they feared reprisals.

Libyan helicopter gunships fired on a rebel force advancing west toward the capital Tripoli along the country's Mediterranean coastline Sunday and forces loyal to leader Moammar Gadhafi engaged in intense ground battles with the rival fighters.

The opposition force pushed out of the rebel-held eastern half of Libya late last week for the first time and have been cutting a path west toward Tripoli. On the way, they secured control of two important oil ports at Brega and Ras Lanouf and by Sunday, the rebels were advancing father west when they were hit by the helicopter fire and confrontations with ground forces.

Fierce ground battles were raging around the front line between two towns about 30 miles apart, Ras Lanouf and Bin Jawad to the west. Associated Press reporters at the scene said Gadhafi loyalists retook Bin Jawad, about 110 miles (160 kilometers) east of Gadhafi's hometown and stronghold of Sirte, which could prove to be a decisive battleground.

The reporters witnessed air attacks by helicopters on the rebel forces and heavy fighting on the ground. A warplane also attacked a small military base at Ras Lanouf and destroyed three hangars and a small building. Regime forces shelled rebel positions at Ras Lanouf with rockets and artillery. Ambulances sped toward the town and rebels moved trucks carrying multi-rocket launchers toward the front lines.

In Tripoli, the city of 2 million that is most firmly in Gadhafi's grip, residents were awoken before dawn by the crackle of unusually heavy and sustained gunfire that lasted for at least two hours. Some of the gunfire was heard around the sprawling Bab al-Aziziya military camp where Gadhafi lives, giving rise to speculation that there may have been some sort of internal fighting within the forces defending the Libyan leader inside his fortress-like barracks. Gadhafi's whereabouts were unknown.

The uprising that began on Feb. 15, inspired by rebellions in neighboring Tunisia and Egypt, has been sliding toward a civil war that could be prolonged, with rebels backed by mutinous army units and arms seized from storehouses going on the offensive to try to topple Gadhafi's 41-year-old regime. At the same time, pro-Gadhafi forces have tried to conduct counteroffensives to retake the oil port of Brega and in the rebel-held city of Zawiya west of Tripoli -- where bloody street battles were reported over the weekend.

The U.S. has moved military forces closer to Libya's shores to put military muscle behind its demand for Gadhafi to step down immediately. But Washington has expressed wariness about talk of imposing a "no fly" zone over the North African nation to prevent the Libyan leader from using his warplanes to attack the population.

At the same time, the U.N. has imposed sanctions, and Libya's oil production has been seriously crippled by the unrest. The turmoil has caused oil prices to spike on international markets.

Hundreds, perhaps thousands have died in the violence with tight restrictions on media making it near impossible to get an accurate tally.

The rebels headquartered in the main eastern city of Benghazi have set up an interim governing council that is urging international airstrikes on Gadhafi's strongholds and forces.

British Defense Secretary Liam Fox said Sunday that a "small British diplomatic team" is in eastern Libya to try to talk to rebels. But he would not comment on a report that special forces soldiers were captured by Gadhafi opponents when a secret mission to put British diplomats in touch with leading rebels went awry.

British Foreign Minister William Hague urged Gadhafi to hand over power and put an "immediate stop" to the use of armed force against Libyans.

In Tripoli, Libyan authorities tried to explain the unusually heavy gunfire that erupted before dawn by saying it was a celebration of the regime taking back Ras Lanouf near the rebel-held east and the city of Misrata close to Tripoli.

Despite those claims, AP reporters saw ongoing battles still in progress in Ras Lanouf hours after the claim of victory and residents of Misrata said the city remained in opposition hands.

After the gunfire eased in the early morning, thousands of Gadhafi's supporters poured into Tripoli's central square for a rally, waving green flags, firing guns in the air, and holding up banners in support of the regime. Hundreds drove past Gadhafi's residence, waving flags and cheering. Armed men in plainclothes were standing at the gates, also shooting in the air.

Over the weekend, residents of Zawiya, a city of some 200,000 people just 30 miles (50 kilometers) west of Tripoli, said pro-Gadhafi forces stormed in to try to break the control of rebels over the area. Zawiya was the city closest to the capital held by the opposition.

Members of the elite Khamis Brigade, named for one of Gadhafi's sons who commands it, had been massed outside Zawiya for days. Residents said Saturday that a large number of tanks rolled into the city and many were killed and wounded in the counteroffensive.

Libya's Deputy Foreign Minister Khaled Qaid claimed on Saturday that "99 percent" of Zawiya is under government control. The AP made repeated attempts to reach Zawiya residents by phone on Sunday, but the phones were turned off.

Britain's Sunday Times newspaper reported that up to eight British special forces soldiers, armed but in plain clothes, were captured while escorting a junior British diplomat through rebel-held territory in eastern Libya. It said the special forces intervention angered Libyan opposition figures who ordered the soldiers to be locked up on a military base.

The British Defense Secretary Fox said his government was in touch with the team in Benghazi but told BBC radio it would be "inappropriate" to comment further. When pressed on whether the U.K. diplomatic team was in danger, Fox reiterated that the government is in contact with the diplomatic team.

"It is a very difficult situation to be able to understand in detail," he said. "There are a number of different opposition groups to Colonel Gadhafi in Libya who do seem relatively disparate."

"Given the continued levels of illegitimate violence within Libya we call upon Colonel Gaddafi to put an immediate stop to the use of armed force against the Libyan people," Hague said in a statement. "He must hand over power without delay to a government which fully recognizes the legitimate aspirations of the Libyan people," he added.

"The U.K. reiterates its support for the transition to a government that will deliver greater democracy, justice, transparency, human rights and accountability in Libya. We understand the desire of Libyans to enjoy the freedoms which have been denied to them for many years and support them in this endeavor," he said.