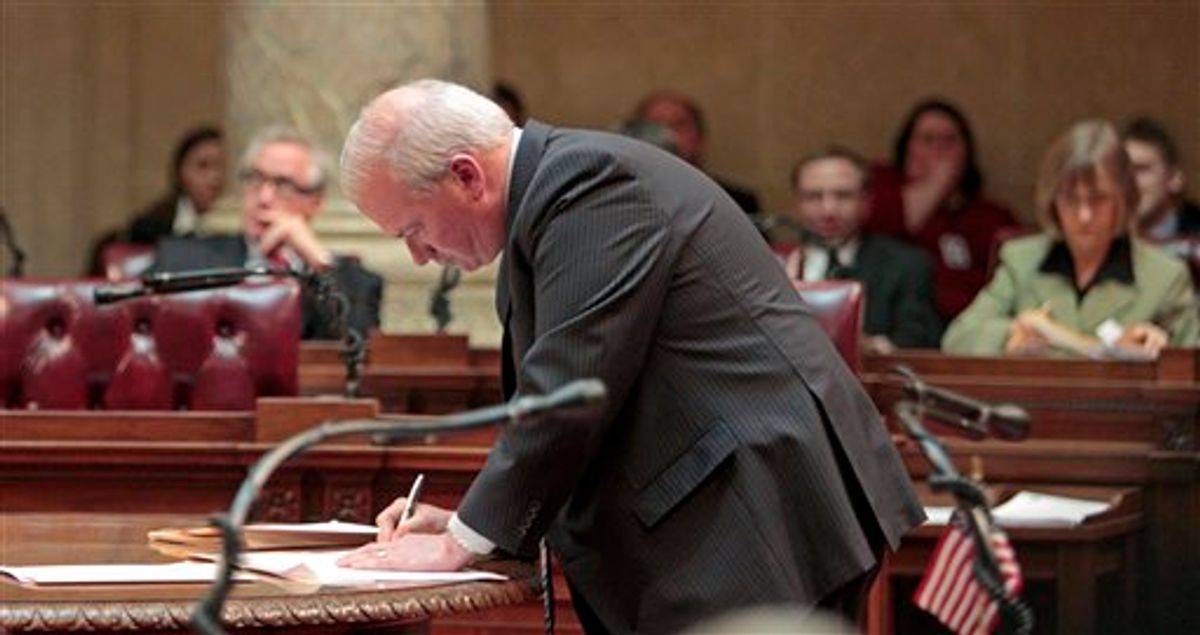 Negotiations have stalled in Wisconsin over Republican-backed efforts to strip most public workers from their collective bargaining rights, a Democratic lawmaker said Saturday as pro-union demonstrators neared their third straight week of protests at the state Capitol.

Sen. Tim Cullen said talks with Republicans broke down Thursday but communication lines remain open. Cullen said it's difficult for either side to compromise, since Democrats don't want to lose support from their base and Republican Gov. Scott Walker doesn't want to appear weak by backing down.

Cullen was among the 14 Democratic senators who fled Wisconsin to block a vote on the bill, which Walker has said is needed to help ease a state budget deficit projected to hit $3.6 billion by mid-2013. Walker's spokesman didn't return a message Saturday, though the governor has said that he won't compromise on the collective bargaining issue or anything that saves the state money.

Two other senators who fled the state joined the Rev. Jesse Jackson in Chicago to urge Walker to negotiate with workers. Sen. Lena Taylor said Democrats left because they "needed to slow the bill down" after it was approved unchanged in the state Assembly.

"I ask the governor, 'do your job. Come to the table and speak to Wisconsin workers.' We agree that fiscally we need to do things differently. We even agree that there are some places where we need to talk about how we negotiate," Taylor said. "However we refuse to accept in America that we don't believe that a voice at the table is an option. It is not an option of a leader and it surely is not the Wisconsin way."

"We've been here for the last 16 days we'll continue to be here until worker's rights are removed as the target in this budget repair bill by our governor," he said.

Opponents see Walker's bill as an effort to weaken unions, and protests have drawn tens of thousands of people to Madison since activists began a sit-in at the Capitol nearly three weeks ago. A judge late last week ended protestors' overnight stays, but several hundred were back in the rotunda Saturday afternoon chanting "Who's house? Our house!" and "Hey-hey, ho-ho, Scott Walker's got to go!"

Renee Peplinski, a fifth-grade teacher in Wisconsin Rapids, said she doesn't mind making financial concessions to help the state even though it would hurt her family. She's more concerned about losing her collective bargaining rights. Without union protections, teachers would be at the mercy of administrators who could decide to fire them for any perceived slight, she said.

"Every teacher I know is depressed," said Peplinski, 42. "Every minute of the day there's this black cloud."

Outside, hundreds of people marched in the streets, banging drums and carrying signs that read "No one has ever died from overexposure to education" and "Worst bill ever." Hundreds more waited to get into the Capitol.

Walker has said the bill is needed to ease a deficit that could hit $137 million by July and $3.6 billion by the middle of 2013. His proposal comes up with the money for this year in part by forcing state employees to pay for half the cost of their pensions and twice their current health care premiums -- concessions equivalent to an 8 percent pay cut.

With the labor bill stalled, Walker said he has to issue layoff notices starting Friday so the state can start to realize the $30 million savings he had assumed would come from the concessions. The layoffs wouldn't be effective for 31 days, and Walker said he could rescind them if the bill passed in the meantime.

All state workers, except those at prisons, state hospitals and other facilities open around the clock, would be potential layoff targets.