Email from Cairo: So now what?

The poor hope, the rich move on, and Tahrir Square is like the Bronx after a big Yankee win only safer, friendlier 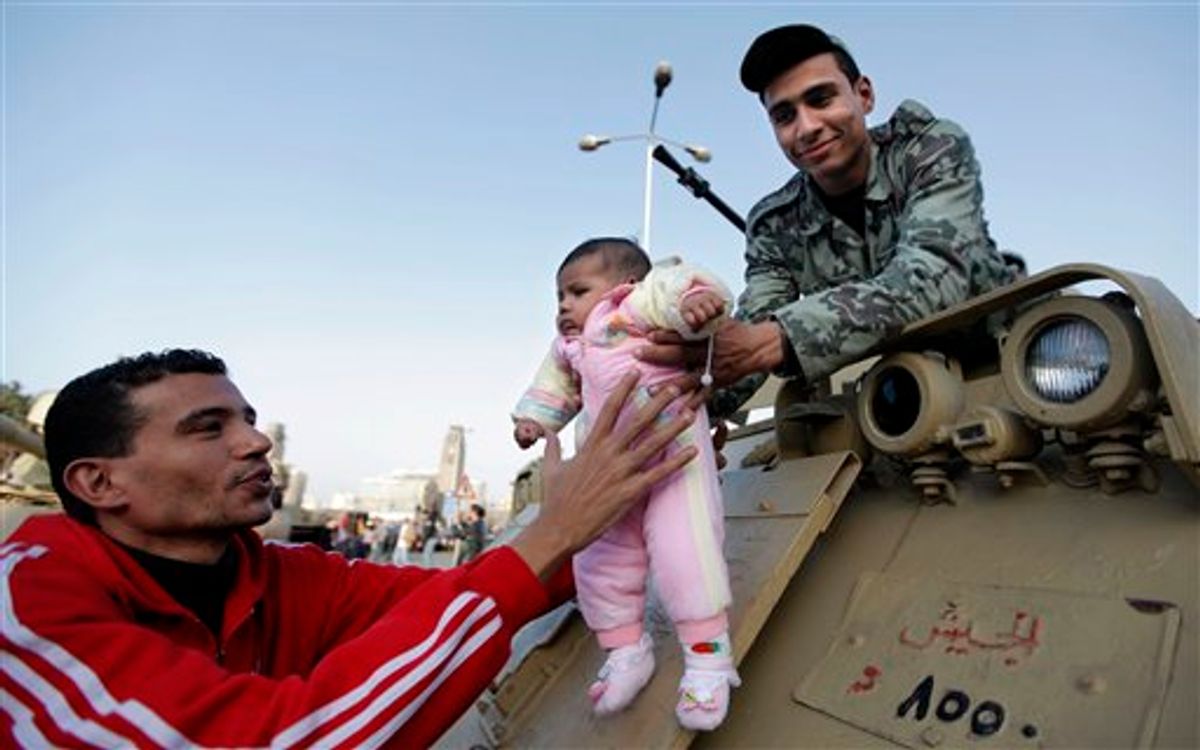 An Egyptian man hands his child to an army soldier in order to take a picture of him on top of an army personal carrier during Friday demonstration at Tahrir square in Cairo, Egypt Friday, March 4, 2011. Egypt's new prime minister designate Essam Sharaf has vowed before thousands of mostly young demonstrators at a central Cairo square that he'll do everything he can to meet their demands, pleading they turn their attention to "rebuilding" the country. (AP Photo/Nasser Nasser) (AP)
--

It's basically ancient Rome out here, with the plebs gathering in Tahrir to demand reforms once a week, patricians coasting around in Mercedes and BMWS, trying to keep as many privileges as possible, the military holding all the real power (which they've had since Nasser) and everyone aware of it. All the main intersections are guarded by Abrams tanks and armored personnel carriers. But a lot of the soldiers don't even shave, often can be seen texting girlfriends from the tank cockpits, accepting another baby from some family excited for a photo-opportunity.

They seem more instruments of branding than anything else; "The army and the people are one," they chanted during the revolution, an idea reinforced with every GI-cuddling-infant Nokia snapshot. There's been only one exception to this: A group of commandos in balaclavas rushed Tahrir Square last weekend, beating the protestors with cattle prods, Kalashnikov butts, threatening live ammunition. They arrested a photographer friend of ours and accused him of being an Israeli spy. A Canadian, he had maple leaves tattooed on both arms -- which of course only confirmed their suspicions, the Israelis being masters of deception.

But the next day the army apologized, the people seemed to accept it, the revolution, such as it is, continued towards whatever it will be.

Last week someone firebombed the Ministry of the Interior, no one seemed to mind or miss it.

Tahrir Square is like the Bronx after a big Yankee win, only safer and friendlier. I got in for the Day of Celebration, was hoisted onto one of the lion-bearing pediments on Kasr El Nil Bridge, handed a drum to beat, cheered, had the Egyptian flag painted on my cheek. Yesterday they had another huge manifestation celebrating the ouster of Prime Minister Shafeek, dismissed by the military after a Tucker Carlson/Jon Stewart moment on Egyptian TV. The angry arab mob mistook me for a Hollywood movie star, made me pose for arm-linked group portraits, one man kissed me on the cheek.

The only life I feared for was the one I live back home.

The wealthy remain so. Zamalek is an island in the Nile developed by Europeans into one of Cairo's nicest neighborhoods during the Suez Canal era. A Swiss, Baehler, built a belle epoque mansion there where now is La Bodega, Cairo's best restaurant. You go in for dinner and see fauxhawked Egyptian playboys drinking whiskey as hijabless women sip Red Bull. One soft-cheeked Sharifa seems to have convinced more than a few of her love. Russians and Europeans plot business. Bob Marley plays. The only reminder of the Revolution is the bandage beneath your waiter's eye.

Journalists are frustrated that the big story has gone elsewhere, leaving them to skulk through military checkpoints to garden district parties in derelict mansions built under the British, on rooftop terraces enshadowed by ancient trees, towering and shaggy. The revolution has made old men of twenty-six year old Ivy Leaguers. They drink duty free whiskey and recount the glory days of...last month, lamenting that things will have to turn ugly again if Egypt is to regain the narrative of Middle Eastern strife and bloodshed from Libya, Oman and, perhaps, Saudi Arabia, whose Day of Rage is still in planning phase.