As the U.N. scrambles on a no-fly zone resolution, the loyalist forces launch air attacks on rebels 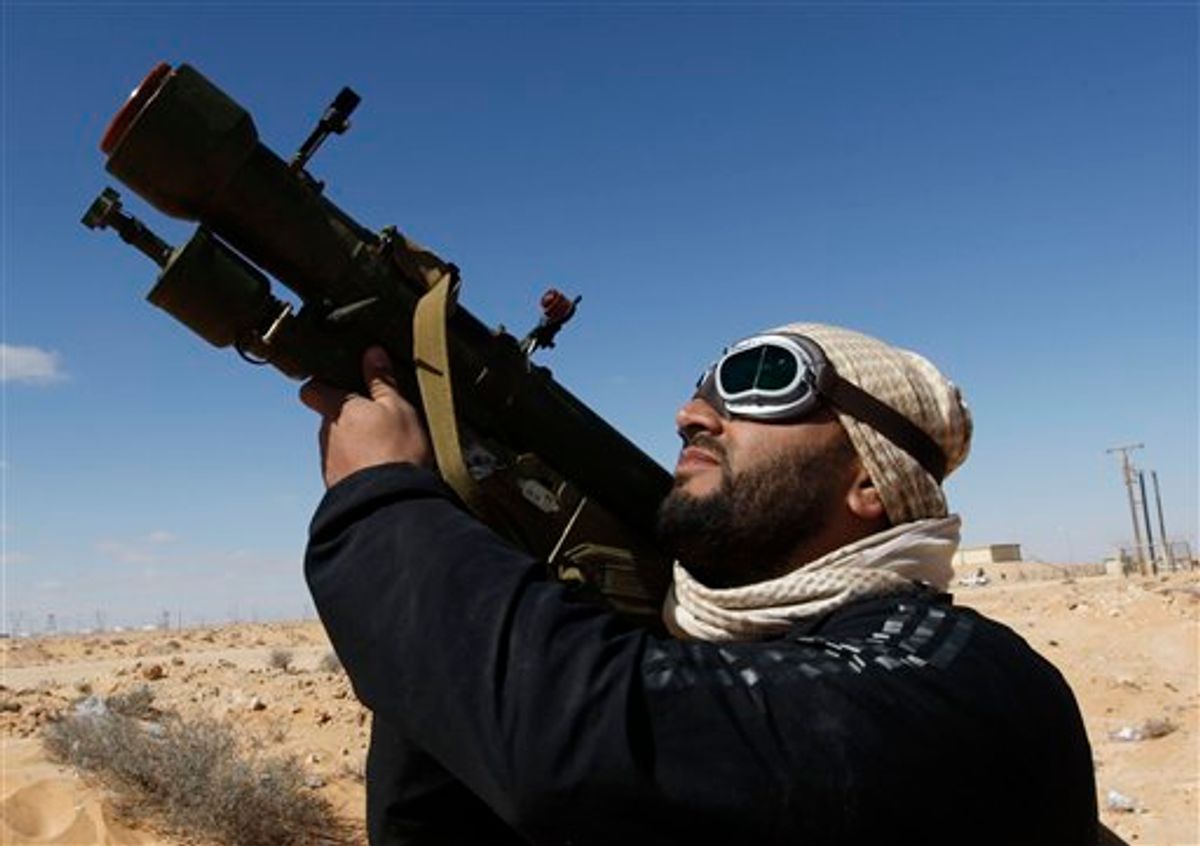 An anti-Libyan leader Moammar Gadhafi rebel, holds his anti-aircraft missile as he looks to the sky, in the oil town of Ras Lanouf, eastern Libya, Sunday, March 6, 2011. Thousands of Moammar Gadhafi's supporters poured into the streets of Tripoli on Sunday, waving flags and firing their guns in the air in the Libyan leader's main stronghold. Earlier, the city woke to the crackle of heavy machine-gun fire that rattled the capital before dawn.(AP Photo/Hussein Malla) (AP)
--

Repeated airstrikes by Libyan warplanes on Monday illustrated the edge Moammar Gadhafi holds in his fight against rebel forces marching toward the capital: He controls the air. After pleading from the uprising's leaders, Britain and France began drafting a U.N. resolution for a no-fly zone in Libya that could balance the scales.

President Barack Obama warned that the U.S. and its NATO allies are still considering military options to stop what he called "unacceptable" violence by Gadhafi's regime. NATO decided to boost flights of AWACs surveillance planes over Libya from 10 to 24 hours a day, the U.S. Ambassador to NATO Ivo Daalder said.

"I want to send a very clear message to those who are around Colonel Gadhafi. It is their choice to make how they operate moving forward. And they will be held accountable for whatever violence continues to take place," Obama said during remarks in the Oval Office Monday.

Libyan warplanes launched multiple airstrikes Monday on opposition fighters regrouping at the oil port of Ras Lanouf on the Mediterranean coast a day after they were driven back by a heavy government counteroffensive aimed at stopping the rebel drive toward Tripoli, Gadhafi's stronghold.

One strike hit near a gas station in Ras Lanouf, blasting two large craters in the road and wounding at least two people in a pick up truck.

The rebels can take on "the rockets and the tanks, but not Gadhafi's air force," said Ali Suleiman, a rebel fighter at Ras Lanouf. "We don't want a foreign military intervention (on the ground), but we do want a no-fly zone. We are all waiting for one."

Still, Western military intervention does not seem imminent -- and the warnings may be an attempt to intimidate Gadhafi with words before deeds. British and French officials said the no-fly resolution was being drawn up as a contingency and it has not been decided whether to put it before the U.N. Security Council, where Russia holds veto power and has rejected such a move. Western officials have said a no-fly zone does not require a U.N. mandate, but they would prefer to have one.

In the battles over the weekend, Gahdafi's forces unleashed their strongest use of airpower yet in the nearly three-week-old uprising. A powerful assault by warplanes, helicopter gunships and heavy barrages of artillery, rockets and tank fire drove the opposition forces out of the town of Bin Jawwad, 375 miles (600 kilometers) east of the capital.

The counteroffensive blunted what had been a steady advance by a force of 500 to 1,000 rebel fighters pushing down the coastal highway along the Mediterranean Sea west toward Tripoli. The rebels were forces back to Ras Lanouf, about 40 miles to the east.

The past three days of fighting killed 30 rebels and wounded 169, said Gebril Hewadi, a doctor at Al-Jalaa Hospital in Benghazi. The rebels are now struggling to set up supply lines for weapons, ammunition and food, with many living off junk food, cookies and cans of tuna. They are waiting for rocket launchers, tanks and other heavy weapons to arrive with reinforcements from their headquarters in the eastern city of Benghazi.

Libya appears to be sliding toward a civil war that could drag out for weeks, or even months, as rebels try to oust Gadhafi after 41 years in power. The opposition already controls the entire eastern half of the country -- from Ras Lanouf to the Egyptian border.

The fighting in Libya, which produces nearly 2 percent of the world's oil and delivers most of it to Europe, continued to push oil prices ever higher. Traders are worried the strife may spread to other oil-rich nations. Crude prices settled at $105.44 on Monday. They peaked earlier in the day at $106.98 per barrel, the highest since Sept. 26, 2008.

Libya's main population centers lie along the country's main east-west highway on the Mediterranean coast and rebels are trying to push the front line westward toward the capital. Their biggest obstacle along the way is Sirte, Gadhafi's hometown and a bastion for his forces, just west of Bin Jawwad. Taking Sirte would be a major morale boost to the opposition and give it almost a clear way to Tripoli.

The opposition also holds several cities in the west close to Tripoli. But the government appeared to have taken back one of them, Zawiya, after days of heavy fighting. Monday saw the heaviest bombardment yet in the city, just 30 miles outside Tripoli, said one resident. He said tanks and artillery opened fire around 9 a.m. and by the afternoon, rebels had been driven out Zawiya's main square.

"The tanks are everywhere," said the resident, who fled the city in the afternoon. "The hospital is running out of supplies. There are injured everywhere who can't find a place to go."

Gadhafi's warplanes give him an extra edge in the fight against rebels. At the very least, they intimidate rebel fighters battling in open desert with little cover.

Still, so far Gadhafi has not brought -- or not been able to bring -- the full firepower of the air forces against the rebellion. In Sunday's fighting, the massive artillery and rocket bombardment did more to break the rebel ranks.

That may be in part because of the weakness of his air arsenal and worries over the loyalty of its personnel. Over the decades, Gadhafi built a large air force, estimated at around 500 combat aircraft and helicopters. On Google Earth, dozens of Soviet-era MiG and Tupolev fighters can be seen lined up at air bases in Sirte and in the deserts of the southwestern part of the country.

But well over half of the aircraft are believed to be unable to fly, because they are outdated and because under decades of sanctions Libya was unable to procure spare parts, according to GlobalSecurity, a U.S.-based website that monitors world militaries. Several years ago, Libya signed a deal with France to repair its 1970s-era French Mirage fighters, but only four of them were brought up to speed.

Two of those repaired Mirages are now in Malta, illustrating another of Gadhafi's worries -- the loyalty of his pilots.

Early on in the uprising, two air force colonels defected and flew their Mirages to the Mediterranean island nation. The crew of a Sukhoi fighter ditched their aircraft in flight, parachuting away and letting it crash south of Benghazi, rather than bomb targets. In fighting Saturday, rebels succeeded in shooting down a warplane, using anti-aircraft guns captured in the uprising.

But rebels clearly fear Gadhafi could bring out even heavier firepower from the air.

Mustafa Abdul-Jalil, the head of the interim government National Council set up by the opposition in Benghazi, has met with delegations from European countries and discussed possibilities for a no-fly zone, or even Western airstrikes on bases from which attacks are launched, an opposition official close to the council said Monday.

He did not say where the discussions stood and would not specify which European countries sent delegations. He also said they discussed the possibility of Western recognition of the National Council as Libya's government. The official spoke on condition of anonymity because of the sensitivity of the discussions.

In Tripoli, Libyan Foreign Minister Moussa Koussa denounced what he said were U.S., French and British contacts with the eastern rebels. "There is a tremendous conspiracy against Libya," he said. "For sure there is a conspiracy to divide Libya. It seems that the British are yearning for the colonial era."

In Washington, White House spokesman Jay Carney said the U.S. and its partners are considering a wide variety of military actions, including a no-fly zone. He said another option was to provide weapons to rebel forces, though he cautioned that there were still many unanswered questions about what groups comprise those forces.

"I think that it would be premature to send a bunch of weapons to a post office box in eastern Libya. We need to not get ahead of ourselves in terms of the options we're pursuing," Carney said.

British Foreign Secretary William Hague told the House of Commons Monday that "we are working closely with partners on a contingency basis on elements of a resolution on a no-fly zone, making clear the need for regional support, a clear trigger for such a resolution and an appropriate legal basis."

But U.S. Defense Secretary Robert Gates warned last week that imposing a no-fly zone would amount to an act of war because "a no-fly zone begins with an attack on Libya" to destroy its air defenses. He also cautioned that an attack on Libya could drag the U.S. military into another conflict, even as nearly 150,000 troops continue to battle in Afghanistan and Iraq.