More than a dozen former and current U.S. priests accused of abuse are unmonitored by communities they live in 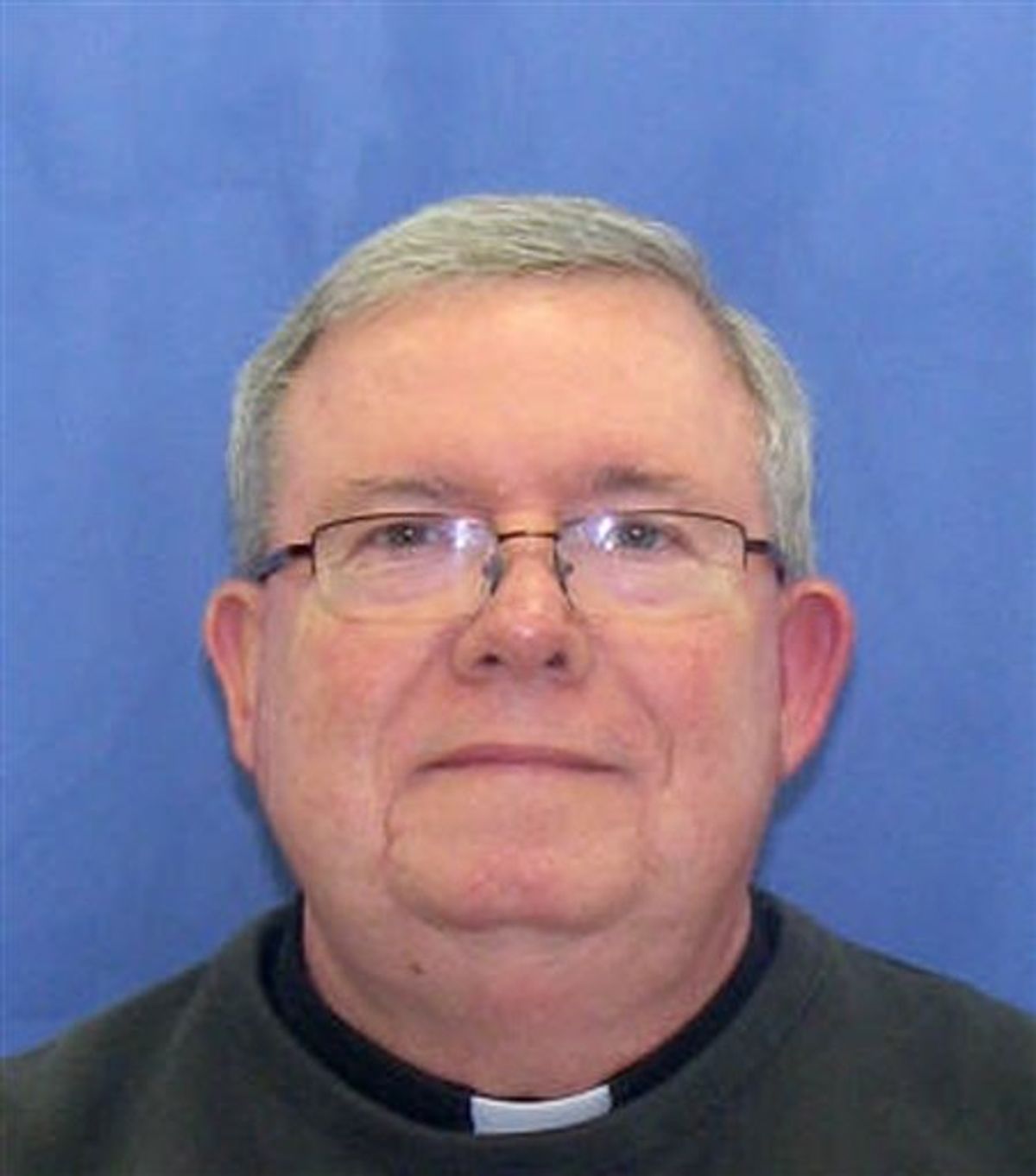 Carl Sutphin was a problem priest who left ministry in the Roman Catholic church just before being charged nearly a decade ago with 14 counts of molestation for sexually abusing six children.

He was never convicted of the charges, and he now lives in a doublewide mobile home in a quiet neighborhood within two miles of a youth sports complex, a library, two day care centers and at least two elementary schools. Sutphin admits he molested children as a priest, but his name doesn't show up in a sex offender database because the charges were dismissed because too much time had elapsed.

"I don't remember the numbers. I won't say I deny it. I do not deny it, no," Sutphin, who has been accused of abuse by 18 people, told The Associated Press. "The church could have acted quicker, I think, and sometimes reports were not made right away. In my case, some of the cases didn't come forward until 15 or 20 years later. ... So the church didn't do anything about it, they couldn't do anything about it."

Sutphin is one of dozens of former and current priests and religious brothers accused of childhood sexual abuse in the Archdiocese of Los Angeles who now live unmonitored by civil authorities in communities across the state and nation. For many, the statute of limitations had expired by the time the abuse was reported, making it impossible for prosecutors to land convictions and subject the priests to sex offender databases and monitoring.

Plaintiffs' attorneys have worked with private investigators since October to compile a list of the priests' addresses, the most comprehensive accounting of the whereabouts of the 233 clergy accused of abuse in civil lawsuits in the Los Angeles archdiocese. They hope to use it Thursday to persuade a judge to recommend the release of all church files for every priest or religious brother ever accused of sexual abuse in the sweeping litigation.

Those confidential files are at the center of a heated dispute between the church and plaintiffs' lawyers since the nation's largest archdiocese reached a record-breaking $660 million settlement nearly four years ago. Plaintiffs want the files -- which could include internal correspondence, previous complaints and therapy records -- released, saying it's a matter of public safety. The church is pushing for a more limited release of information.

The list of addresses, obtained by The Associated Press, contains nearly 50 former priests who live unmonitored in California, and another 15 in cities and towns from Maryland to Texas to Montana. More than 80 more cannot be located despite an exhaustive search by plaintiffs' attorneys. Four are believed to have fled to Mexico or South America. About 80 are dead.

Lead plaintiff lawyer Raymond Boucher says it's the only time anyone has put together a list of priest addresses in any other diocese or archdiocese nationwide. Lawyers hope to eventually make the names and locations of abusive priests available to the public, similar to Megan's Law databases that exist nationwide.

"Many of these priests would be in prison but for the fact that the archdiocese essentially created immunity for them by hiding them and keeping the secrets. It's essential that these documents come out because we know one thing: there is no cure for priests or anybody that sexually abuses a child," said Boucher.

"Many of them are within a mile of multiple schools, day care centers and parks and they are a time bomb waiting to go off. The only way the public can ever protect itself is to have a full, complete knowledge about them."

The church is willing to release a significant number of documents from priest files and has already made public the names of priests who were credibly accused or whose names were listed in civil lawsuits, Hennigan said. The archdiocese believes, however, that many of the priests whose addresses appear on the list were wrongfully accused. The archdiocese included those clergy in the $660 million payout without admitting wrongdoing, simply to settle the claims, Hennigan said.

The allegations of sexual abuse have ruined those priests' reputations, he said.

The archdiocese in 2004 released the names of more than 200 accused priests -- including Sutphin's -- in a report to parishioners. The list did not include the men's whereabouts.

About 30 of the individual priests, including Sutphin, are also fighting the release of files.

They argue that the settlement, which contained provisions for the release of documents, was an agreement between the archdiocese and the plaintiffs without their consent. Most of the priests themselves are not named as parties to the lawsuits and obtaining their records violates the Fourth Amendment, the protection against unreasonable search and seizure, said Donald Steier, their attorney.

Many of the priests named in sex abuse lawsuits have been defrocked, removed from ministry or placed on leave by the church since being accused. Most appear to have rebuilt their lives outside the church and live quietly and anonymously, unnoticed in their new neighborhoods, which span 37 California cities from Berkeley to Oxnard to Oceanside.

In Gardena, for example, a former priest who pleaded no contest in 1987 to misdemeanors of soliciting lewd acts and battery now manages a mobile home park wedged in a gritty industrial stretch 15 miles south of Los Angeles. He lives in a double-wide trailer with a statue of Jesus on the porch, not far from a sign advising drivers to watch for children at play.

The former priest, Gerald Fessard, saw his conviction expunged after he completed three years' probation, according to news reports. He was accused by eight people overall, according to the archdiocese. He is not listed on the state's Megan's Law website.

Fessard, 64, declined to comment to the AP when contacted outside his home Sunday.

His neighbor, Celia Fuhr, said Fessard collects rent from residents and maintains the trailer park, but largely keeps to himself and dotes on his cats.

"I don't know nothing about him," Fuhr said, upon learning of Fessard's past. "Oh my God. Oh no, don't tell me that."

Less than an hour's drive away, in the working-class city of Rowland Heights, retired priest Stephen Hernandez lives in a large two-story house across the street from a family with a 6-year-old child and within two miles of three playgrounds and four elementary schools.

The 77-year-old Hernandez was arrested seven years ago and charged with molesting a 14-year-old boy while serving as a counselor at a Los Angeles area juvenile hall. The clergyman had faced up to 10 years in prison if convicted of all charges, but eventually pleaded no contest to a misdemeanor and was sentenced to probation.

He is not listed on the state's Megan's Law website. He declined to comment to The Associated Press when contacted at his home Saturday.

Chitira and Delfino Zuno have lived across the street from Hernandez for years and said they were surprised to learn the elderly priest they call Father Steve has a criminal past.

Still, the couple said they supported him and weren't concerned for the safety of their grandson, who's lived with them since he was an infant. Hernandez is ill and never crosses the street to their home, said Chitira Zuno.

"He's right now old, sick. He only needs compassion," said Zuno, who described herself as a devout Catholic who hosts a religious program on public access TV.

"A priest is a priest. If we can think about faith, we can see that we are all human and we can all do mistakes. I know some priests that have been accused and maybe he's done a mistake once in his life and this is going to be after him all his life."

That's a reaction that is difficult for some alleged victims to accept, including one man whose allegations against Sutphin led to the charges against him that were eventually dismissed because of a 2003 Supreme Court ruling involving the statute of limitations. The man and his brother also sued the archdiocese and received a settlement. The Associated Press does not identify victims of sexual abuse.

The 44-year-old told the AP that Sutphin molested first his brother and then him while they spent the night at the priest's mother's house in Ventura before a planned fishing trip. The priest took the man's sibling into another room first and then returned for him and began tickling him and trying to undress him, he recalled. The priest also questioned him about his genitals.

Sutphin gave up after a struggle, but the memory has scarred the man for life and created tension between the brothers, who never fully discussed what happened 35 years ago.

"The guy's a predator. I feel sorry for whoever has to live around him," he said. "Where do we draw the fine line in the sand? Is there a little kid that's seven years old living across the street from him and next thing you know, is he going to want to take him out fishing? Do people really know what this guy's all about?"