What comes after Wisconsin?

A forward-looking movement is defending worker benefits from a bygone era. But it's a step in the right direction 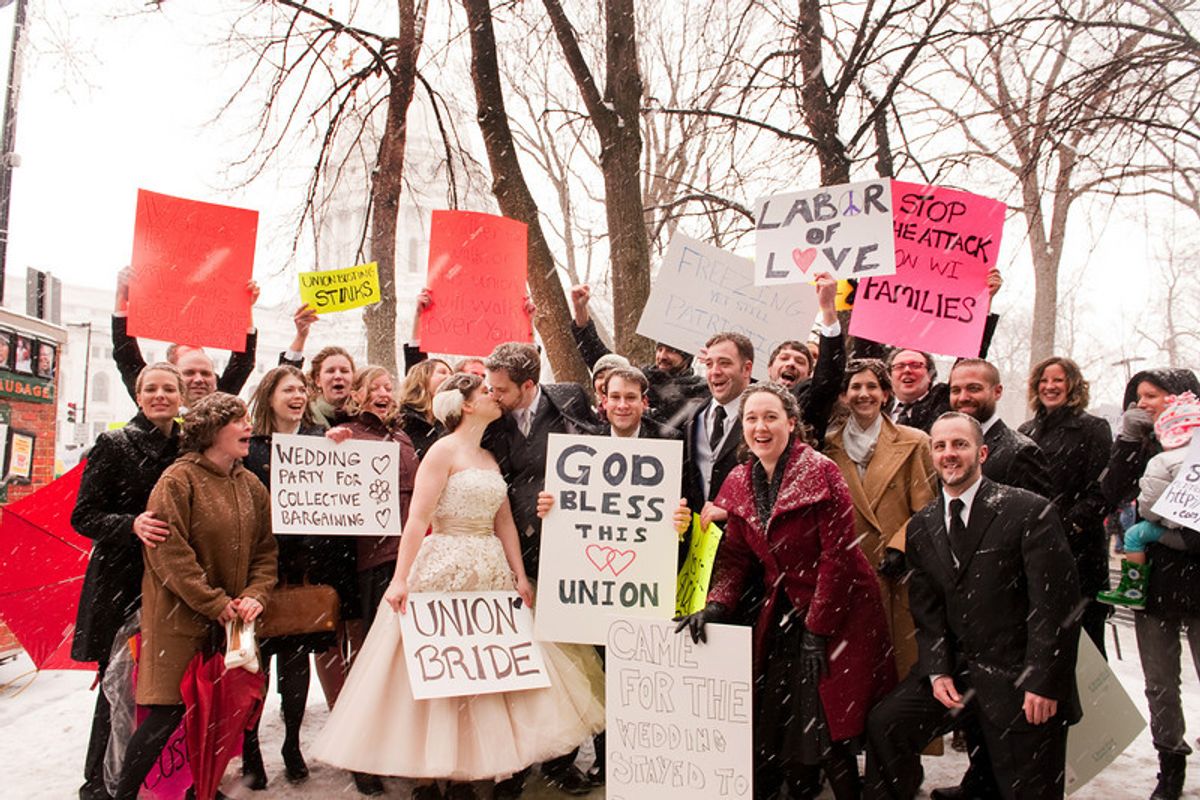 I've been open about my admiration for the Wisconsin movement to stop union-busting Gov. Scott Walker -- as well as my uncertainty about what it ultimately means for progressive politics. Like so much else going on right now -- Mike Huckabee's slurs against President Obama, Michele Bachmann's blithering performance on "Meet the Pres"s Sunday; Tea Party Nation leader Judson Phillips' backing property requirements for voters, taking us back to the early 19th century -- the battle in Wisconsin is giving American voters crucial (and scary) information about the 21st century Republican Party. That's important in the wake of the voter panic that led to Republican gains in the 2010 midterms.

But if Wisconsin helps us define what we're against -- union-busting plus a big fat overreach on behalf of plutocrats like the Koch brothers by a governor who's clearly in over his head -- it isn't yet telling Americans what progressives, or Democrats, are for.

First, the good news: Walker's moves are backfiring with Wisconsin voters, badly. The latest Rasmussen poll, whose results typically favor Republicans, shows that almost 60 percent of voters disapprove of Walker's moves, and it had a few more highlights: 77 percent have a favorable opinion of Wisconsin teachers, and of voters with school-age children, two-thirds disapprove of Walker's "reforms." There's no doubt it's given a morale boost to organized labor: Steven Greenhouse reports from the AFL-CIO convention on new optimism, and new organizing, in the wake of the anti-GOP, pro-worker backlash in Wisconsin.

It's also inspired a new recognition of the crucial role unions have played, and still play, as a political counterweight to the interests of corporations and the wealthy. Jacob Hacker and Paul Pierson, among others, have found an eerie parallel between the way the wealthiest Americans' share of income has risen as the percent of Americans protected by a union has fallen. Instead of denying that unions have a political agenda, union leaders and their defenders have proudly admitted to that agenda in the wake of Walker's attacks.

Plus, it's just plain exciting to see the variety of folks inspired by the fight against Walker. After I wrote about last weekend's excitement in Madison (mostly ignored by the media), a grateful reader sent me the photo of her wedding day that's on this blog post. How can you not be excited by that crowd?

To help me think about the larger meaning of Wisconsin, I e-mailed Jefferson Cowie, author of one of the best books of 2010, "Stayin' Alive: The 1970s and the Last Days of the Working Class." Cowie showed how the culture clash and political battle between the New Left and Old Labor in the '60s and early '70s helped shatter the New Deal coalition, seemingly for good. Like me, Cowie is both inspired by what's happening in Wisconsin -- and not sure where it leads.

Our exchange helped me put my finger on what feels a little retro about the Wisconsin movement: The state's public sector unions are fighting to protect healthcare and pension benefits that are disappearing in the private sector, and are endangered in the public sector, too. We have an eccentric privatized welfare state, in which Americans have come to rely on employers for benefits that the government largely provides in most other industrialized countries -- most notably, healthcare and pensions. Labor unions helped bring about that arrangement, agreeing with management during the post-World War II boom that a privatized, job-tethered system of benefits was preferable to a traditional welfare state. But in the last 20 years, many private-sector employers have reneged on the bargain, leaving even employed people without benefits. That's what enabled Walker to believe he'd be able to pit public workers against private-sector workers in a war between the "haves and have nots." To their credit, it seems most private-sector workers are refusing to take the bait.

But this system of variegated, multi-tiered, public-private benefits fragments American workers, and is part of what has prevented a strong lobby for government-provided health insurance, and what today puts Social Security at political risk. (You may have heard, I'm writing a book called "Indivisible" -- and thus I'm obsessed with the way Americans wind up divided into so many warring camps, and also how "government assistance" gets hidden from people, whether in the form of mortgage-interest deductions or highway funding.) We forget that these "private" benefits have been at least partly publicly funded, by making healthcare and retirement funds tax-free. Tax-exempt 401K contributions alone cost the government over $100 billion in revenue a year, Jacob Hacker found. This legacy of the privatized welfare state, with hidden public subsidies for services the government funds directly in other countries, lets Americans venerate the "free market" and misunderstand the role of government -- and makes progressive organizing harder.

Despite all that, Cowie (like me) is inspired by Americans coming together to resist another attack on working folks, even if it's not clear what comes next. Here's our exchange.

I've been trying to articulate why what's going on in Wisconsin matters, and isn't just nostalgia for some past era of solidarity -- but I can't quite get at it. Still, I feel like something important is happening nonetheless. What are you thinking about it all?

I've been thinking about this for some time now, and I'm not sure where it's blowing. We have to keep in mind that this is fundamentally a struggle to maintain the status quo -- I've heard little about advancing the struggle outside of a few terminally optimistic activists. Yet the energy is remarkable, the solidarity high, and the coalition is potentially rich.

But these "line in the sand" labor events have come and gone -- from the attempts to save industrial unions and collective bargaining in the '80s, the Teamsters strike in the '90s, [World Trade Organization protests in] Seattle in '99, etc. All of those events and more were supposed to be the event that turned it all around. Madison is raising awareness and could turn things around a bit with regard to public consciousness (I've never heard the term "collective bargaining," for instance, used more often than in the recent weeks). Ultimately, though, I have to balance the hope for the preservation of public sector labor rights in Wisconsin with my desire to reimagine the entire worker-rights paradigm.

When you say the coalition is rich: Whom do you see there that's encouraging, that's surprising?

The first and most obvious thing there is that there are public- and private-sector workers rallying to the same cause. This doesn't happen very often, as their interests are often seen in opposition to one another. Private-sector workers and union members pay the tab for public-sector workers, so there has always been a certain tension there. The question is whether the political discourse will shift away from allegedly "spoiled" (which by any measure they are not) public workers toward, "Hey, why don't we all try to get reasonable benefits and bargaining power on the job?" There have also been all sorts of other groups involved, like students, religious groups, community leaders and the like. It's quite uplifting.

Why do you think it's resonating with even people who aren't in unions?

It's cutting both ways here. Smart people are going to say that public-sector workers are a model, a shining star, for the third-class private-sector jobs to strive toward. That's how the public sector took off in the '60s and '70s. Ironically, they were trying to catch up with the unionized private sector. Now those situations are reversed. Unfortunately, there is another impulse in American political culture that seeks to tear down the other guy rather than try to raise everyone's standards.

Here's the problem: The Wisconsin teachers' and public employees' rights should be defended in every way possible. But the long-term interest of social justice requires that we stop linking employment and social benefits. It hurts to say that. But the only hope is to move toward universal programs. Here I think Michael Lind got it right in Salon, ("Liberalism and the Post-union Future"). This system of employer-based benefits is the problem, not the solution. At the same time, however, we'll never get close to such social democratic dreams without a strong and flexible labor movement. It's a Catch-22.

The flaw in the system goes all the way back to the 1940s when we accepted a privatized welfare state, connected directly to employment and unionization. As we've seen in recent decades, that means the system is vulnerable to piecemeal attack and long-term erosion until there is nothing left. We can turn the entire paradigm on its head: Do people with good benefits see that their future is tied to those who do not have, say, health insurance? Recall the "Cadillac" healthcare controversy [during last year's healthcare reform debate], in which those with good policies, often achieved through collective bargaining, were hesitant to accept any constraints on their policies in order that others might get healthcare. We really need to shift the struggle toward universalism, which also might resonate with the American political tradition of pursuing the interests of "the people" rather than "the workers" as a class.

At the same time, we have to hang on to every piece of decency in the occupational world that is out there.

What about your students?

My students are definitely interested and fired up. Refreshingly, they are also far from naive, not lost in ideological crap like many previous generations were, and remain both militant and pragmatic. It's a great combination that I haven't seen in a while. The Great Recession made them intellectually curious again. This is making them political, but I also see them struggling with some of their growing cynicism about Obama. A lot of them were out there working for him before they could vote and were hoping for more.

Nothing substitutes for the uplift of being in a social movement. This young man, for instance, is in my class right now: