Pictures of Kate Middleton -- before she would be a princess

Before she was engaged to Prince William, Middleton led a relatively normal life. Here are some family photos 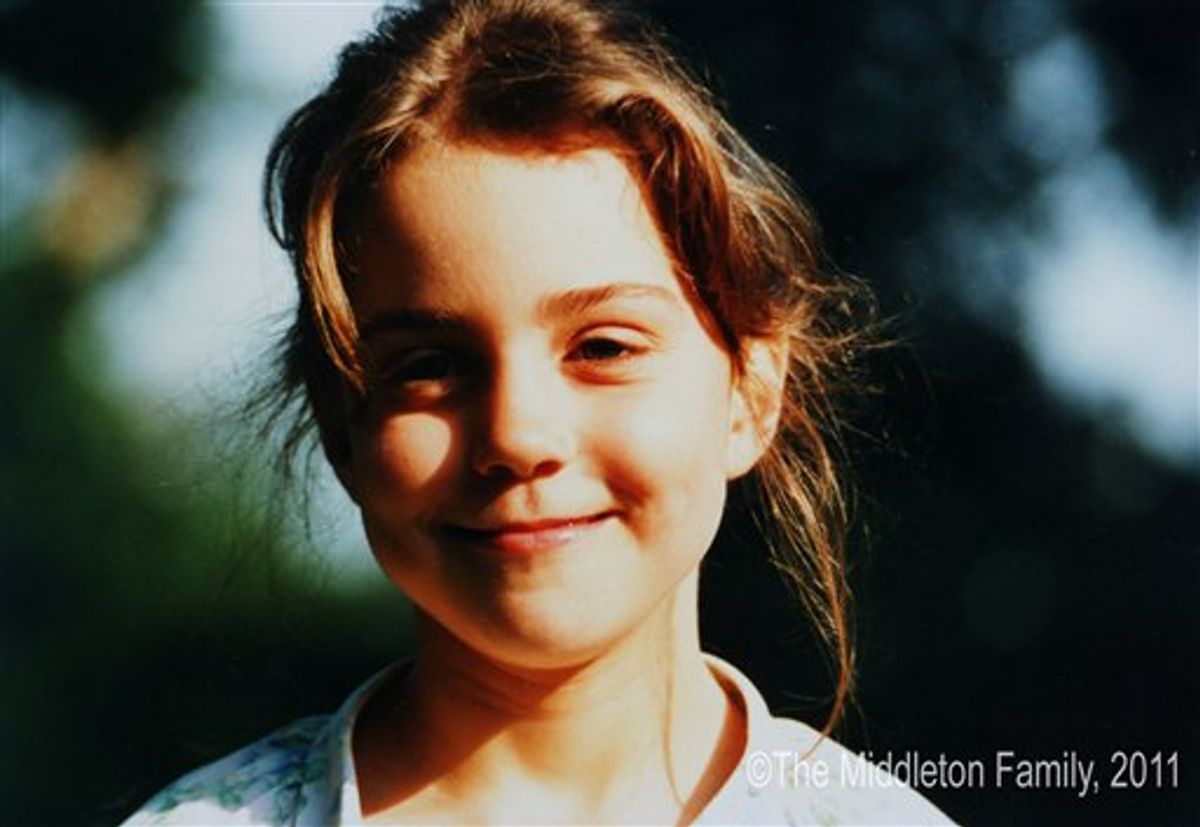 It's impossible not to like the new childhood pictures of Kate Middleton -- and that's just how Buckingham Palace wants it.

Whether she is frolicking outdoors at age three, flashing a winning smile at five, hugging a jubilant boyfriend -- Prince William -- on their joint graduation day, Britain's future queen is an irresistible lassie. Thousands of newspapers, TV stations and websites around the world immediately flashed the pictures moments after they appeared Monday on the official royal wedding site set up by Prince Charles' press team. You couldn't miss them even if you tried.

In times gone by, monarchs rose or fell on the strength of their armies and navies, but today -- when constitutional monarchies like the House of Windsor depend on public goodwill -- they need positive press coverage to build support with the masses.

Enter Operation Kate -- the release of adorable family photos to an image-hungry global press corps. It's part of a sophisticated effort by the royal family to generate favorable coverage about the big event -- and experts say so far it's working.

"The royals don't always get it right to start with," said royal historian Hugo Vickers. "They tend to be either behind the curve or ahead of it, but at the moment I think they're getting it absolutely right."

Queen Elizabeth II has often shown media savvy -- it was at her request that her 1953 coronation was televised, a groundbreaking use of new technology that gave adoring Britons and much of the world a positive image of the country's youthful queen. Prince Charles' press operation also makes extensive use of Twitter and Facebook in a bid to reach younger people and shake his staid image.

"The royal family has embraced social media with real enthusiasm," Vickers said. "By using Twitter and Facebook, they are able to bypass journalists who sometimes have the unfortunate habit of putting a spin on things that the royals may not like."

But the perpetual tug-of-war with the press cuts both ways -- just ask Prince Andrew, currently being skewered for his embarrassingly close ties to a billionaire U.S. pedophile who has also helped Andrew's ex-wife, Sarah Ferguson, pay off some of her personal debts.

No amount of media-spinning -- or cute photos -- can change the damning tone of the coverage of Andrew's and Sarah's links to a sex offender.

In the past, both the queen and Charles were outfoxed by the late Princess Diana, who was a master at generating public sympathy by giving lengthy televised interviews that detailed her harsh treatment as a newcomer to "The Firm", as the royal family is known.

The queen was seen by many as insensitive and slow in her measured response to Diana's death. The media and the public wanted an immediate show of emotion from a monarch trained for decades to keep a rigid upper lip -- and a woman who probably didn't care much for her ex-daughter-in-law anyway.

That low point in the queen's relations to her subjects was captured in the movie "The Queen."

This year's Academy Award-winning "The King's Speech" dealt with an even earlier royal mass communications problem: King George VI's speech impediment that made it difficult for him to speak effectively during a time of crisis.

Monday's release of photos and information is designed to make Middleton's storybook life seem more accessible, but it is not damage control. Middleton's image does not need repair. She is already popular -- her recent appearances with William have been quite successful, and she has shown an easy touch when relating to the public.

The photos released Monday from the Middleton family album simply show a picture-perfect princess in the making: a pigtailed toddler, a smiling child, a family vacation shot and a healthy, wholesome beauty graduating from the University of St. Andrew's in Scotland. The palace photo package also included an official Middleton mini-biography laced with deep insights into the woman-who-would-be-queen, including that she likes to sail and enjoys going for walks.

The royals' newly minted wedding site has already attracted nearly 2 million hits since it launched last week. Palace press aides know the Middleton photos will be used again and again in the run-up to the wedding -- and for years to come.