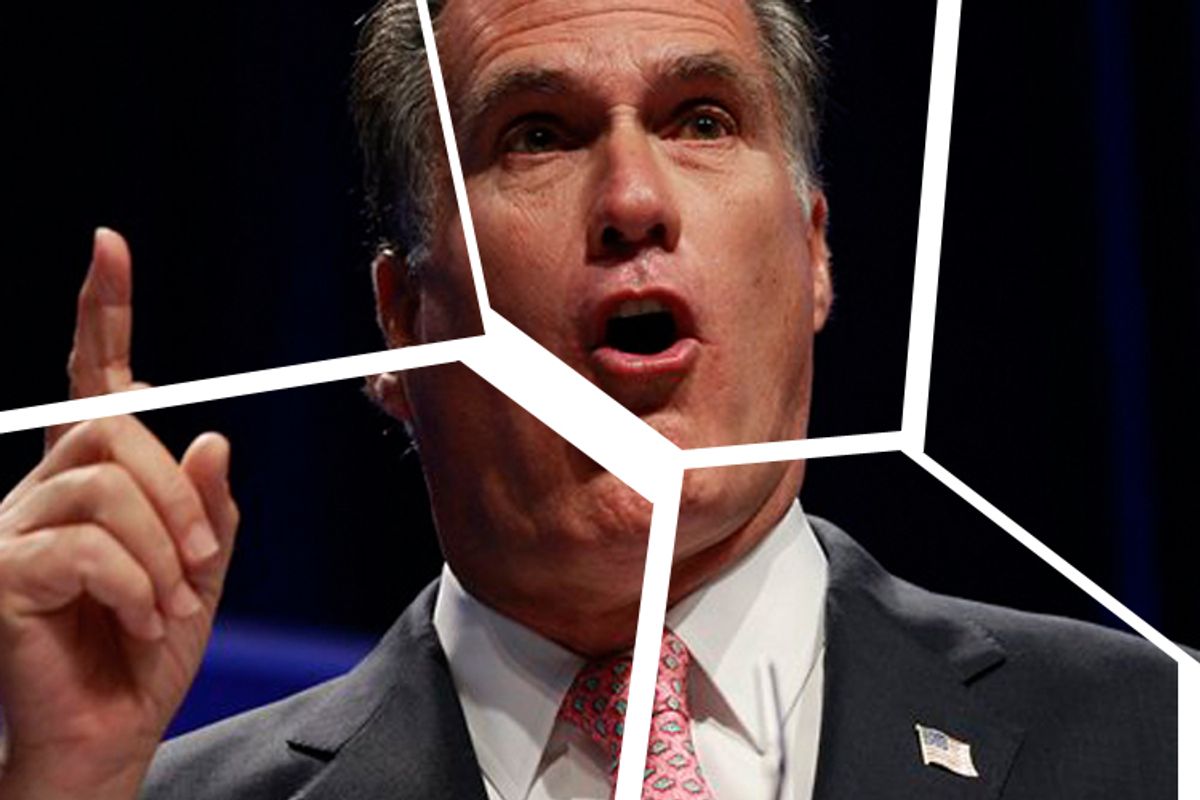 Mitt Romney used a speech in New Hampshire over the weekend to unveil the basic message he plans to build his presidential candidacy around. With his opponents poised to torment him with reminders of the Obama-style healthcare plan he implemented as governor of Massachusetts and with religious conservatives still unconvinced that he's truly one of them, Romney will apparently present himself as the jobs candidate.

This is, according to NBC's First Read, the third different version of Romney to grace the political stage:

Romney 1.0 was the socially moderate businessman who won election as Massachusetts governor in 2002. Romney 2.0 was the socially conservative presidential candidate who ran to John McCain's and Rudy Giuliani's right on abortion, stem cells, and illegal immigration in 2007-2008. And Romney 3.0 appears to be the repeat presidential candidate who will focus more on the economy and his business record than on social issues

Actually, that's not quite right. If you examine his past closely, this is actually Mitt's fifth political incarnation -- at least. Here's a handy guide:

Even though Ted Kennedy's poll numbers are unusually shaky (thanks to the rape trial saga of his nephew, William Kennedy Smith), Massachusetts Republicans struggle to find a credible challenger for the 1994 campaign. With their two top options -- Gov. William Weld and state Treasurer Joe Malone -- ruling it out, Romney seizes the void and announces his candidacy in November 1993. At roughly the same time, he changes his party registration from "independent" to "Republican."

Romney runs as a carbon copy of the culturally liberal Weld. He promises a gay rights group that he will do more to promote their cause than Kennedy and he repeatedly declares his support for legal abortion. Actually, he does much more than that: During a televised debate with Kennedy, Romney invokes the story of "a dear close family relative that was very close to me that passed away from an illegal abortion." This experience, he says, is the foundation for his belief that " we can believe as we want but that we cannot impose our beliefs on others. And you will not see me waver on that."

Romney also disparages Jesse Helms and distances himself from Ronald Reagan -- whose reputation, especially in Massachusetts, had fallen into disrepute in the early 1990s -- reminding voters that he wasn't even a registered Republican when the Gipper was president. And he plays up his decision to vote for Democrat Paul Tsongas in the 1992 presidential primaries. (By '94, Tsongas was the most popular political figure in Massachusetts.) When Tsongas endorses Kennedy, the conservative Boston Herald editorializes:

And - if such truths can ever be acknowledged in politics - the truth is that Tsongas has far more in common with Kennedy's Republican challenger Mitt Romney. (Romney has already acknowledged crossing over to the Democratic presidential primary in 1992 to cast a vote for Tsongas. It is a statement he makes with no apologies and with a certain degree of pride.)

After failing to unseat Kennedy, Romney briefly mulls a follow-up campaign in 1996 against John Kerry, then passes when Weld decides to run himself. His political options in Massachusetts closed for the foreseeable future, Romney heads to Utah in early 1999 to take charge of the beleaguered Salt Lake Olympic Organizing Committee.

The reviews for his work are favorable -- so much that Romney explores relaunching his political career in the Beehive State. The only realistic target, he quickly discovers, is the governorship, which is due to open up in 2004, two years after the Olympics. But to even have a chance, he'll have to distance himself from the liberal cultural positions he staked out in Massachusetts. Utah is a more conservative state to begin with, and GOP nominations are generally settled at a state convention dominated by the hardest of the hard-liners. So when the Salt Lake Tribune writes about Romney's potential abortion baggage in the summer of 2001, the chairman of the Salt Lake Organizing Committee responds with a letter in which he states: "I do not wish to be labeled pro-choice."

Romney makes no other political noise in Utah, mostly because an unexpected opportunity back in Massachusetts presents itself.

Romney had been operating under the assumption that Republican Jane Swift, the acting governor of Massachusetts (who was elevated to the post in early '01 when Paul Cellucci left to become ambassador to Canada), would be the party's unanimous choice for a full term in 2002. But by late 2001, it's clear that Swift, through an endless parade of gaffes and missteps, is rapidly losing her party's confidence -- just as Romney is becoming something of a national hero for his Olympic stewardship. The Games go off without a hitch in February '02, and almost as soon as they end, Romney returns to Belmont, Mass., and jumps into the governor's race. Swift, who trails him by a stunning 63 points in one poll, backs down.

In the general election, Romney once again plays up his cultural liberalism, although his pronouncements aren't as over-the-top as they were in '94. (Perhaps his eyes are already on his next move after winning the governorship.) In a debate, he refuses to use the term "pro-choice," but also refuses to call himself antiabortion. As governor, he promises, he'll support and uphold abortion rights. The election is close, but Romney satisfies enough culturally liberal suburbanites (who otherwise like his reform agenda) that he's not a zealot on social issues, and wins the race.

For the first two years of his term, Romney is an engaged governor pursuing a moderate, good government agenda. For instance, he picks the former president of the Conservation Law Foundation, Douglas Foy, to devise an environmentally-friendly "smart growth" plan for the state and (initially) backs Foy when he tries to organize a greenhouse gas emissions accord among several Northeast states. Romney also seeks to build the moribund state Republican Party, sinking massive money and effort into the 2004 elections, which feature an unusually deep roster of GOP state legislative candidates.

The '04 campaign is a total bust. Romney's legislative candidates fall victim to the top-of-the-ticket unpopularity of George W. Bush (and Kerry's status as the Democrats' presidential nominee), and a ruling from the state's Supreme Judicial Court legalizing gay marriage forces Romney to choose between his present political imperatives and his future national ambition. Essentially, he decides to give up on Massachusetts and begin positioning himself immediately for the 2008 GOP presidential nomination.

During the last two years of his term, Romney officially changes his position on abortion, assumes a leading national role as a gay marriage opponent, and begins belittling Massachusetts and its liberal reputation to out-of-state Republican audiences. In 2006 alone, he spends 212 days out of Massachusetts, racking up more than 200,000 miles in the air and making stops in nearly 40 states. He almost completely disengages from Massachusetts politics, although he does use his office to make symbolic goodwill gestures to national conservatives (for instance, an executive order deputizing State Police officers to round up illegal immigrants). The one exception to his disengagement: enactment and signing of the state's healthcare reform law in 2006. It's supposed to be one of Romney's main presidential selling points (who knew?) and he makes sure a representative of the Heritage Foundation is on hand for the lavish signing ceremony, lest any national conservatives wonder if an individual mandate is ideologically kosher.

On the campaign trail, Romney is frequently confronted with reminders of the liberal views he once espoused in Massachusetts. His sincerity is challenged. He pretends that he hasn't changes many views, besides his evolution on abortion. For instance, he takes to claiming that his '92 vote for Tsongas actually represented an act of mischief-making by a strategically savvy Republican partisan:

"Romney confirmed he voted for former U.S. Sen. Paul Tsongas in the state's 1992 Democratic presidential primary, saying he did so both because Tsongas was from Massachusetts and because he favored his ideas over those of Bill Clinton," the Boston Globe's Scot Lehigh and Frank Phillips wrote on Feb. 3, 1994. "He added he had been sure the G.O.P. would renominate George Bush, for whom he voted in the fall election."

It's just one of the utterly ridiculous cover stories Romney offers for the words and actions of Romney 1.0. A surprising number of conservatives rally to him anyway -- although not enough to capture the GOP nomination. And while he begins running for 2012 immediately after ending his '08 candidacy, it becomes clear after President Obama pushes his healthcare bill through Congress that Romney's signature achievement in Massachusetts could haunt him in the '12 primaries. Another reboot is in order.