A profile of Mrs. Newt, who is reserved, religious and also his third wife 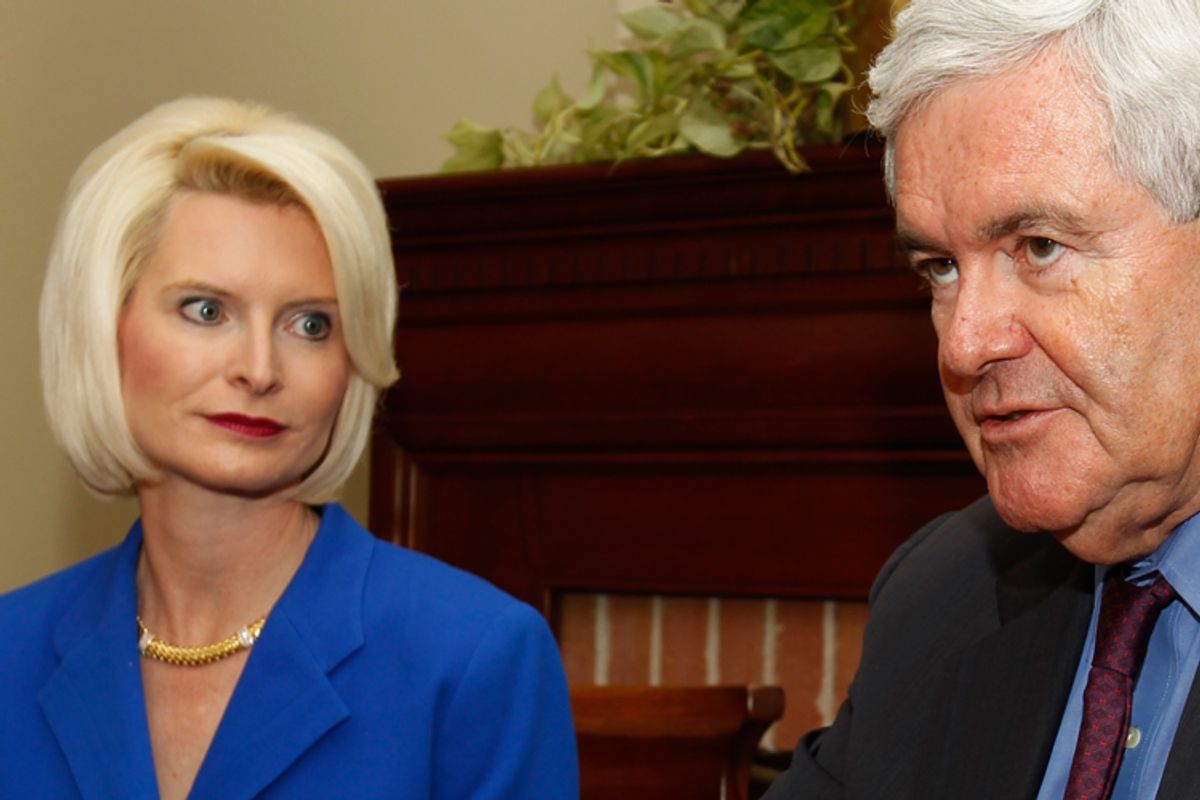 Callista Gingrich is the third wife of Newt Gingrich. In Gingrich's current public appearances -- and there are lots of current public appearances, because Gingrich has various ventures to promote and is making one of his traditional exploratory presidential runs in order to enlist the press in the promotion -- Callista is by his side. At his dozen CPAC book signings and presentations and film screenings, Callista was listed with him on the schedule. So Politico attempts to profile her, today. Everyone says she's very nice. And she's also something of a liability.

Because, you see, she is the woman he left his last wife for. She was, formerly, his mistress. And his last wife was not even his first wife. Callista has made Newt into a much more religious person, we're told. Though unmentioned is the fact that part of Callista's spiritual rehabilitation of Newt involved him having the Catholic Church annul his marriage to second wife Marianne -- and Newt didn't even finish converting to Catholicism for another couple of years.

All of this is especially problematic for someone attempting to win a Republican presidential primary, because Republicans are the supposedly moral ones. But Newt still has the forces of God on his side!

"I just reject the argument that she’ll be a liability, or that Newt’s past would be a liability," said Ralph Reed, the former Christian Coalition chief. "I think as long as he's prepared to confront those challenges and he can do so in an authentic way, people's (inclination) will be to be forgiving. Who wants to be judged on their past? Everybody has had issues."

Hah. "Everybody has issues." Ralph Reed has become so ... morally laissez faire. That's the sort of permissive attitude that led to Sodom, Mr. Reed.

Callista does everything with her husband, so she has a fairly high profile, but the recurring theme of the Politico story is that people just don't know much about what she's like personally, because she is fairly reserved. Which could be a good thing, because Americans hate uppity political wives:

"She is much more in the model of a Laura Bush than a Hillary Clinton," said David Bossie, the president of the conservative group Citizens United and a longtime Gingrich ally. "She just is a strong partner like Laura Bush was, but not out in front like Hillary Clinton was."

Callista also has "an Iowa connection," and she and her loving husband enjoy just wandering around the State Fair, being with Real Americans, and other things you big city folks wouldn't understand.

For someone who seems quite introverted, a serious presidential campaign involving numerous questions about her husband's serial infidelities and her own romantic conduct would probably be sheer hell, so let's hope, for her sake, that Newt gives up on this ridiculous farce soon.