The value of the Wisconsin union timeout 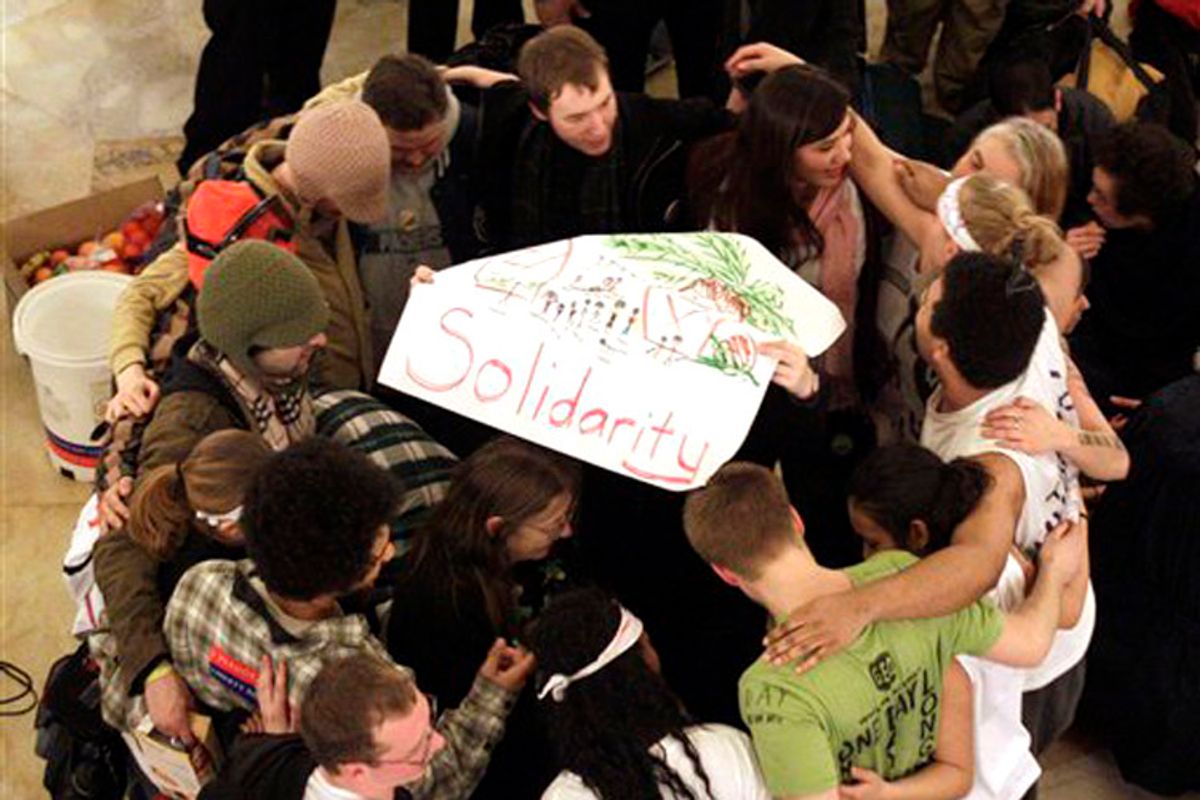 Protesters celebrate inside of the state Capitol in Madison, Wis., Thursday, March 3, 2011, after a judge ordered the Department of Administration to open the Capitol to normal business hours starting Monday, March 7, 2011. (AP Photo/Andy Manis) (Andy Manis)
--

As we wait to learn the final denouement in Wisconsin -- will the renegade Democratic senators finally return home, or won't they? -- let's seize the breathing space their impressive filibuster has created to take a closer look at two alternative views of reality.

On the one hand: The national campaign to restrict the power of public-sector unions by Republicans. On the other: Actual data as to the extent which public-sector worker pensions are dragging down state budgets.

The Wall Street Journal provides us with a comprehensive list of state-level attacks on public (and private) sector unions. The activity in Florida alone provides a good proxy:

In Florida last week, three state legislators introduced bills addressing labor unions. One would prohibit state and local governments from deducting union dues from employee paychecks, which would add to unions' burdens by forcing them to bill members directly.

Another would require members to recertify, or approve, labor unions each year -- a costly and time-consuming process -- if fewer than half of the workers they represent have formally joined. Since Florida is a right-to-work state, workers represented by a union aren't required to join a union even if it negotiates on their behalf.

The third would require unions to send each member a reminder of how they can decertify, or fire, the union, along with an account of union spending, including political contributions.

In states such as Idaho, Nebraska, Tennessee, Missouri and South Carolina, the picture is much the same. Emboldened by big election victories in 2010, Republicans are pushing to carry out an aggressive anti-labor agenda. What's more, we aren't seeing massive demonstrations tying up state capitols on a national basis in response. Wisconsin may have sent an invigorating jolt through the entire American union movement. The outcome of the wave of recall elections that seem sure to come there may also wind up with Republicans losing their Senate majority or even dooming the political career of Gov. Scott Walker. But the national picture is much harder to figure. While national polls indicate Americans support collective bargaining rights for public employees, whether or not that will mean anything when the next election rolls around is questionable.

Pension contributions from state and local employers aren't blowing up budgets. They amount to just 2.9 percent of state spending, on average, according to the National Association of State Retirement Administrators. The Center for Retirement Research at Boston College puts the figure a bit higher at 3.8 percent....

Boston College researchers project that if the assets in state and local pension plans were frozen tomorrow and there was no more growth in investment returns, there'd still be enough money in most state plans to pay benefits for years to come.

"On average, with the assets on hand today, plans are able to pay annual benefits at their current level for another 13 years. This assumes, pessimistically, that plans make no future pension contributions and there is no growth in assets," said Jean-Pierre Aubry, a researcher specializing in state and local pensions for the nonpartisan Center for Retirement Research at Boston College.

(Florida, incidentally, is fully funded through the next 17 years. The state in the worst position on Aubry's list is Kentucky, which can only cover the next 4.7 years. Good thing Kentucky's government workers do not have the right to collectively bargain, or that state's finances would really be in trouble!)

Kevin Hall's entire piece is a must read for anyone looking for a clear-eyed appraisal of the available data on public sector pension funds. Reading it, it's hard not to draw the conclusion that public sector workers are taking a politically motivated fall for state budget woes that are largely the result of the recession.

But after the furor in Wisconsin inevitably quiets down, what will it all mean? The Milwaukee Journal-Sentinel reported Monday morning that "outside the Capitol, there is little or no sign of the mass protests that have engulfed the Capitol square in recent weeks."

On the streets surrounding the Capitol, the number of satellite trucks has dwindled to two. And the only sign of an organized-labor presence is the sight of two Teamsters semi-trailers.

Before the week is over, Wisconsin's Democratic senators may finally return to work, and Walker's budget bill may well end up passing. The question of who has won or lost Wisconsin, ultimately, will await the next election. But after mulling Hall's McClatchy article, it's clear that no matter what the outcome, those renegade senators did achieve a very real thing. They gave the entire nation the time to take a close look at what's happening -- to really examine the figures on pension funds and the role of unions, both private and public, in the U.S. economy. We have the chance now to compare the Republican political agenda with reality. Will we take it?