The truth about music in the operating room

Music and medicine are deeply connected. But what kind of music should your surgeon really be listening to? 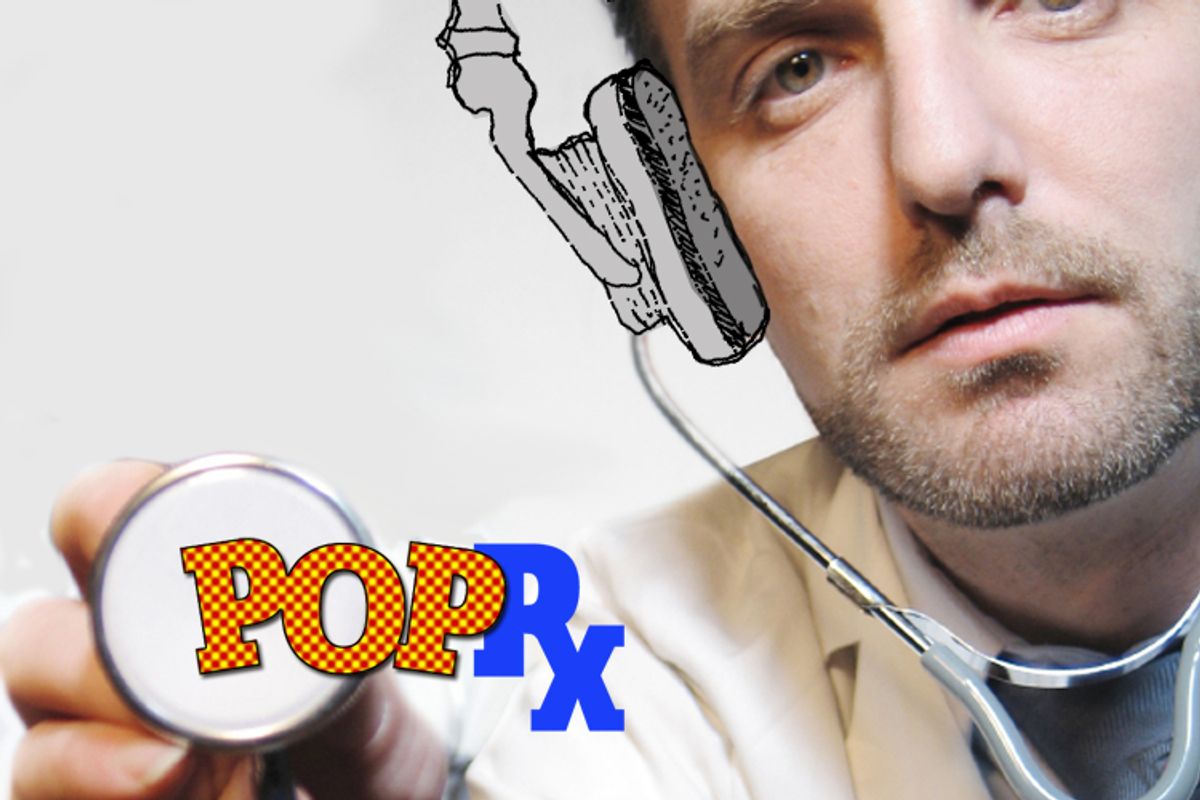 In 1889 Nietzsche wrote, "Without music life would be a mistake." As someone who regularly spends a chunk of change on Radiohead and Bright Eyes, I completely agree. I’m not the only doctor who finds nirvana in Nirvana. There's a reason hospital dramas always feature surgeons listening to -- and arguing about -- music in the operating room. It's because music and medicine are deeply connected.

The fascinating links go back as far back as ancient Greece. Apollo, the God of healing, was often depicted with a harplike instrument called a lyre. Some doctors have doubled as musicians. In the 1950s, a group of doctors at the Mayo Clinic started the Notochords (named after the primitive spine in a developing fetus), playing with Duke Ellington and Jack Benny. More recently, NPR ran a story about an orchestra of doctors from Albert Einstein Medical Center in New York.

Surgeons have a particularly profound relationship to music. As Siddhartha Mukherjee noted in his book "The Emperor of All Maladies," music and medicine "go hand in hand. Both push manual skill to the limit; both mature with practice; both depend on immediacy, precision and opposable thumbs." A 2008 study, in fact, tested whether musical prowess has any impact on performance during laparoscopic procedures (special scopes that surgeons use to perform minimally invasive procedures). Non-surgeons who had experience playing music performed better at suturing using this equipment than did non-musical participants. There's perhaps no better example of the facility of the musician-surgeon than Theodor Billroth, a 19th century virtuoso who pioneered surgical techniques to dissect abdominal tumors from the body and whose talent on violin and piano forged a close friendship with Brahms.

But surgeons don't have to play instruments to enjoy music in the operating room. It's a regular, enjoyable part of the daily routine and one way a surgeon creates a comfortable atmosphere in a sometimes tense setting. Atul Gawande, contributor to the New Yorker and author of "The Checklist Manifesto," operates to Modest Mouse, Arcade Fire, the Decemberists and other alternative bands. (He does own a Fender '62 Stratocaster replica at home, but he says he's rusty.)

So is operating to music a good idea? Lest you go into a panic the next time you hear Lady Gaga while they're administering the laughing gas, the answer seems to be yes.

It's a bit of a tricky thing to prove. It's far from ethical to take a group of surgeons and measure their performance on and off music while they cut into real patients. But studies have offered some insight into the effects of music on surgical performance. One is from the Journal of the American Medical Association and dates back to the grunge rock era, 1994. In this study, researchers took 50 surgeons and measured blood pressure, heart rate and other physiological markers while they performed a series of subtraction problems. Each volunteer performed this task while listening to self-selected music and, later, music selected by the researchers ("Pachelbel's Canon in D," which is supposedly included in a lot of "stress reduction" musical compilations).

It turns out that when surgeons listened to music of their own choosing they had very steady vital signs and performed the subtraction task better than when they listened to Pachelbel. That's encouraging, though it's important to note that the surgeons who participated listened to music regularly both in and out of the operating room. So if you're a surgeon and you think investing in an iPod will make you better with a scalpel and sutures, first ask yourself whether you care for music to begin with.

What about the rest of the operating room team? Anesthesiologists are, of course, indispensable to surgery. Does music help or hurt them? In a study out of the U.K., where 70 percent of anesthesiologists say they've been subjected to music in the operating theatre (as the Brits call it), 63 percent of those surveyed said that they enjoyed the sounds of music while they worked. Those in another survey who did not said it was because they felt music reduced their vigilance and impaired communication with other staff members. Not surprisingly, the most distracting tunes were ones they hated the most. On the other hand, another study contradicted any deleterious effect of music on anesthesiologists' performance: That study measured psychomotor performance, and it didn't change when subjects were listening to self-chosen music, Pachelbel, white noise or no music at all. Finally, surveys of other O.R. team members (nurses, techs, etc.) indicate that music enhances teamwork and communication among members, though, again, most of those surveyed listened to music regularly on their own time.

The next logical question to ask is: What kind of music should your surgeon be listening to while he or she closes your grapefruit of a hernia or bypasses your clogged coronaries? A study from 1976 suggested that rock (sorry, disco), with its varying rhythm and intensity was best. Other surveys have shown that the preferred genre in the operating room is classical, followed by folk, rock, jazz and blues. But, like the JAMA study I mentioned above, most studies hint that music's positive effects have more do with the personal preference of the surgeon or the O.R. team than any particular genre of it.

A couple of last points: First, there is a body of evidence that music also helps patients going to surgery, including reducing anxiety before and after an operation; it may help patients cope better with pain, leading to their requiring less pain medicine. Finally, here's an interesting B-side to this story: Take a listen to a 2001 album called "A Chance to Cut Is a Chance to Cure" by a San Francisco music group named Matmos. The two members of the group, Drew Daniel and Martin Schmidt, took their recording equipment to the hospital and sampled the sounds of surgery, creating electronica out of them. Highlights include "California Rhinoplasty" and "Lasik." Let the sounds of cauterized flesh and dripping anesthetic be music to your ears.