The sheriff who oversees more bison than people

The Corson County, South Dakota sheriff spends up to 12 hours a day monitoring the jurisdiction's 6,000 bison 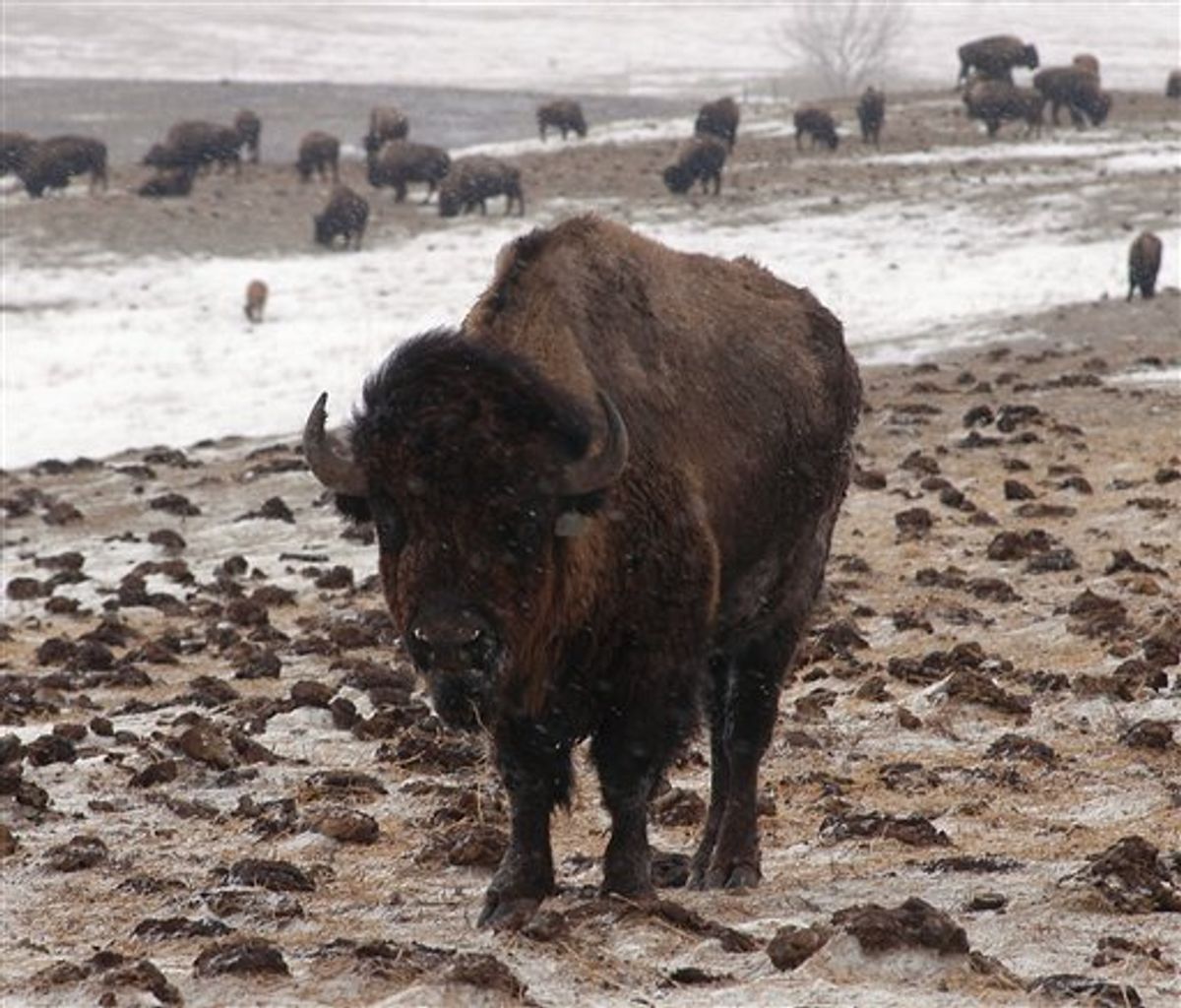 In this Feb. 19, 2011, photo a bison graze in a snow covered pasture at the Wilder buffalo ranch near McLaughlin, S.D. Corson County, which ordered the animals into the sheriff's care, has spent more than $50,000 providing feed and plowing roads at the ranch, which straddles the North Dakota-South Dakota border. (AP Photo/Doug Dreyer) (AP)
--

Sheriff Keith Gall is known as the "singing sheriff" for his a cappella performances at weddings and funerals. But thanks to a judge, the gun-toting tenor now spends more time with a grunting, testy audience of some 6,000 bison that outnumber people in his South Dakota county.

"I'm known as everything related to buffalo now," joked the 42-year-old Gall, who was elected sheriff two decades ago. "It's all part of the job, but this is a first."

His rural Corson County is home to most of a sprawling ranch owned by a Florida real estate tycoon whose herd was ordered into the sheriff's care after more than a dozen bison were found dead. Many more were malnourished and others were stuck by vehicles when they escaped in search of food.

Gall has worn several hats in his life -- radio station disc jockey, band singer, wedding crooner -- and he grew up on a cattle ranch, but he never expected law enforcement would put him back in a pair of manure-covered boots.

Yet now he spends up to 12 hours a day at the 35,000-acre ranch, often cruising desolate roads to check on bison roaming the windswept, snow-covered grasslands. The rolling terrain is interrupted only by a barbed wire fence, trails in the snow left by buffalo and hay-hauling tractors, and shin-high piles of evidence that the iconic Wild West animals -- many of which were underweight and lethargic when Gall took over -- are eating well.

"They're getting some bellies on them now," Gall said as he eyed several hundred of the herd from his patrol car on a recent morning. "The animals are looking better and are more active, moving around more than they were before."

The county has spent more than $50,000 providing feed and plowing roads at the ranch, which straddles the North Dakota-South Dakota border.

Authorities are billing its owner, Maurice Wilder -- who has a history of legal and neighborly problems in both states -- though no charges have been filed since a judge impounded the animals Feb. 1. Wilder didn't return several messages from The Associated Press. The AP wasn't permitted on his ranch.

"It's not the best of deals for our tax dollars," said Jerry Peterson, who owns the Prairie Dog Cafe in McLaughlin, a town where the bulk of the herd has migrated about 10 miles south of the North Dakota border.

Peterson said locals worry that property taxes could increase if the county is stuck paying for the bison's care. They're also tired of dealing with Wilder, who has owned the ranch for about 17 years. He has been investigated for animal abuse and neglect, and residents have complained about his bison running loose, trampling fences and feasting on neighbors' hay. Charges of animal neglect and livestock at large were dropped in North Dakota two years ago after Wilder's company paid eight nearby ranchers more than $60,000 for damage.

"This isn't new news here," Peterson said during a lull before the lunchtime crowd. "We don't need the bad publicity of a clown like that doing this."

South Dakota State Veterinarian Dustin Odekoven said the animals are "all getting adequate care at this time" and are being closely monitored. Wilder needs to adopt a new management plan that must be approved by a judge before the herd could be returned.

"There are some big problems, so it's going to take time," Odekoven said.

So it's unclear when Gall's oversight may end.

Snow and frigid weather, although attributed to a handful of the bison deaths, have kept down crime in the county, which is home to only 4,000 residents and located within the Standing Rock Indian Reservation. Vehicle accidents also have slowed, so Gall's two deputies and lone dispatcher have been able to tend to the county's nine-bed jail and shoulder much of the office work.

"We're not going full force like we usually do this time of year," the sheriff said. "That really helps, because it would be more than an office my size could swallow."

Gall makes the 60-mile round-trip at least once a day to the ranch, which his wife jokes is his new office. His primary duty is ensuring that Wilder's five ranch hands are tending to the bison and that pasture roads are plowed for access. When loads of hay bales are moved in, which can take hours, Gall uses his squad car to block traffic on state highways and county roads. He walks the corrals to ensure hay is in feeders and water is available.

"I can't say I've worn out a dozen hayfork handles feeding the buffalo," Gall said. "I'm making sure things are getting done."

Which has been appreciated on the ranch's North Dakota side in Sioux County, where Sheriff Frank Landeis said about 300 bison were recently located and five were found dead. The sheriff, who has no staff, said at least two ranchers intend to file claims against Wilder for damage to hay supplies and fences after his bison were reported walking over fences and snow-covered ditches.

"Better him than me? You got that right," Landeis said. "He's got his hands full and he already has enough on his plate. But if he needs help, I'll be there."

"I'm not trying to toot his horn," added Gall's wife, Heather, a volunteer ambulance worker and the county's treasurer, "but he probably is the best man for the job."