What is a "no-fly zone" anyway? 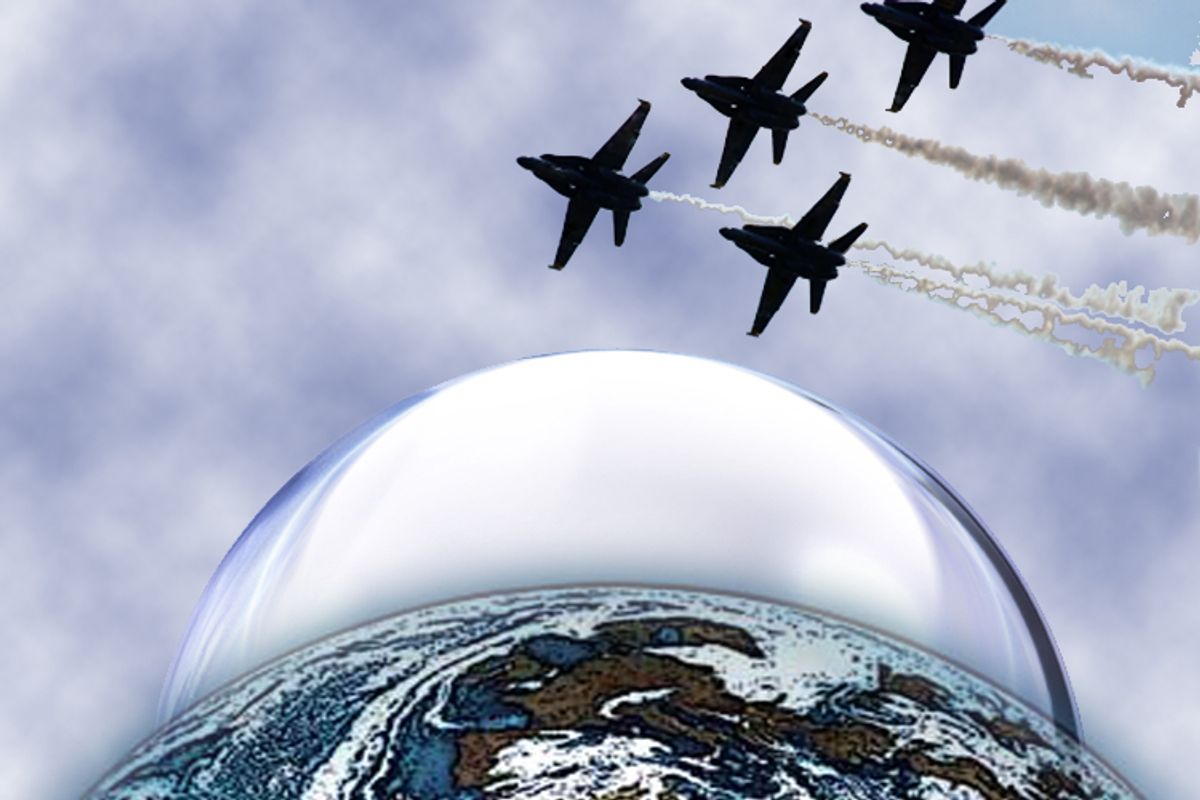 The ubiquitous image coming out of Libya today shows a rebel fighter, hands up, backing away from a plume of dust and smoke a few hundred yards away -- the aftermath of an air strike. The unrest that began a few weeks ago has escalated into a full-scale conflict between the Gadhafi-led Libyan military and rebel forces. Equipped with helicopters, fighter jets and a mandate to crush the uprising, Gadhafi's forces clearly have the potential to brutally slaughter the opposition. In the face of this, a popular proposal from many world leaders, military analysts, and even armchair pundits has emerged: Impose a no-fly zone.

Which raises a question: What exactly is a no-fly zone -- and would it actually help in Libya?

DEFINITION
The general term no-fly zone means different things in different countries. Broadly speaking, a no-fly zone is an airspace in which aircraft are forbidden. Acknowledged as a step towards war, the declaration of a no-fly zone is quite similar to a demilitarized zone in that encroaching on the territory could justify military retaliation. Whether over Tripoli or over the entire country, imposing a no-fly zone in Libya would require securing nearby bases or aircraft carriers to launch jets that can patrol the airspace, engage with aircraft flying through the zone illegally and taking out anti-aircraft facilities on the ground.

BACKGROUND
Historically, no-fly zones are declared in order to protect at-risk areas from being bombed. A number of factors -- from the proximity of bases needed to enforce the zone to the level of ground operations in a conflict -- help decide both whether to establish restrictions. In 1991, a coalition of nations including the United States, the U.K., France and Turkey established a no-fly zone over northern Iraq in order to protect Kurds from attacks by Saddam Hussein's regime. The proximity of nearby air bases in Turkey and Europe made it easier to enforce that no-fly zone.

Around the same time, the United Nations Security Council placed restrictions over Bosnian airspace during the Bosnian War. NATO enforced the area and shaped the role that the organization would adopt in the post-Cold War era. According to the Atlantic, however, these efforts did little to prevent some of the worst human rights abuses of the conflict which happened on the ground.

No-fly zones don't have to apply to military engagements. A number of permanent no-fly zones are in place around the world to protect historical monuments, research centers and political headquarters. The Taj Mahal, Machu Picchu, the City of Moscow and the Royal Palaces are all protected under no-fly zones.

In the United States, the term "no-fly zone" has no legal meaning. The Federal Aviation Administration (FAA) instead designates "prohibited areas" for historically and politically relevant locations, including Camp David and Disney World. Other "temporary flight restrictions" can be imposed in the event of emergencies like wild fires or major events like the Super Bowl.

LIKELIHOOD
Rumor has it that Britain and France will propose a U.N. resolution this week to establish a no-fly zone over Libya as soon as this week. French President Nicolas Sarkozy, British Foreign Secretary William Hague and a secretary general of the Arab League have all expressed support for the resolution.

The Obama administration is noncommittal on the issue, but several major U.S. politicians are calling for a no-fly zone over Libya. On Sunday alone, Senators John Kerry, John McCain and Mitch McConnell all expressed interest in pursuing the one. Former U.N. Ambassador Bill Richardson also endorsed the idea.

Despite such support, enforcing the no-fly zone would be tricky. It would take weeks to organize, since the 15-member U.N. Security Council would first have to pass the resolution (and avoid a veto from permanent members). Then there are the logistical challenges. Italy occupies the most strategic bases for enforcing a no-fly zone. In 2008 created a nonaggression pact with Libya that prohibits Italy from using its territory "in any hostile act against Libya" -- the "friendship treaty" has since been officially suspended, however. Also, as Defense Secretary Robert Gates explained to a congressional committee last week, enforcing a no-fly zone would require first destroying Libya's air defenses. White House Chief of Staff William Daley has cautioned against downplaying the potential complications of no-fly zone enforcement. Bombing any country brings the risk of civilian casualties and unrest on the ground.