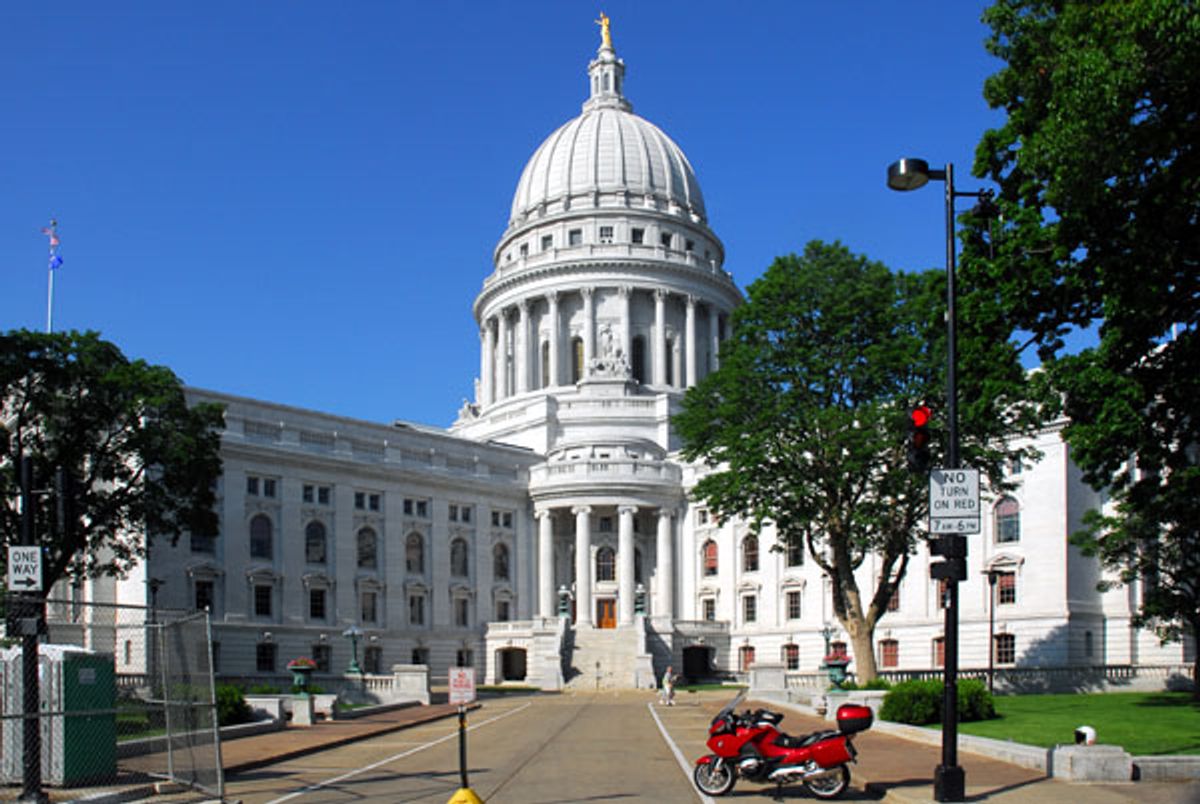 About 700 people rallied Sunday in support of Republican Gov. Scott Walker and his anti-union plan to balance the budget -- a demonstration meant to counter three weeks of large anti-Walker protests in and around the state Capitol.

The rally was the culmination of a 10-stop bus tour sponsored by the conservative advocacy group Americans for Prosperity that started Thursday in Kenosha. It took place at the Aliant Energy Center in Madison, which is a couple of miles from the Capitol, where thousands of pro-union demonstrators rallied Saturday and Sunday.

Hundreds of pro-union counter-protesters lined up outside the arena entrance and parking lot carrying placards and chanting "Shame!" at the Walker supporters. The governor's backers held their own signs with messages such as "I Stand with Walker" and "Dems Serve Unions not 'The People.'"

Matt Seaholm, the state director of Americans for Prosperity, said the purpose of the bus tour and rallies was to show that Walker still has support among those who voted him into office in November.

"We've got to continue the push!" he said at the rally to loud cheers. "It's not going to end anytime soon."

The legislation was passed in the Republican-controlled Assembly but stalled in the state Senate because its 14 Democratic members fled the state to deprive their Republican colleagues of the quorum they'd need to vote on the bill.

Walker defends the anti-union bill as necessary to help Wisconsin plug a $3.6 billion budget hole, but unions and Democratic opponents say it overreaches and is more about busting the unions than balancing the budget because it aims to strip most public employees of nearly all their collective bargaining rights.

Union leaders have agreed to pay more for their benefits, which equates to an 8 percent pay cut, as Walker has proposed as long as they can retain their bargaining rights. Walker has refused to compromise, although he said last week that he was negotiating some changes with Democrats.

Walker spokesman Cullen Werwie said Sunday there were no new developments with the negotiations. One of the 14 Democrats, Sen. Tim Cullen, said Saturday that the talks with Walker broke down on Thursday.

With the bill stalled, Walker said layoffs may be necessary so the state can start to realize the $30 million savings he had assumed would come from the concessions. All state workers, except those at prisons, state hospitals and other facilities open around the clock, would be potential layoff targets.

Walker informed state employee unions Friday that he intends to issue layoff notices to 1,500 workers that would be effective on April 4.

The pro-Walker rally comes after tens of thousands of people protested on Saturday at the Capitol for a third straight weekend. The previous two rallies attracted about 70,000 and more than 80,000. About 5,700 people had been at the Capitol as of early Sunday afternoon, the state Department of Administration estimated.

At the Americans for Prosperity rally, former Madison school board member Nancy Mistele accused unions of being concerned only with maintaining their power, and not with taking care of their rank-and-file members.

"Democrats and unions stand for bankrupting our state," she said. "Shame on them."

Joel Ninneman, a 51-year-old information technology specialist from the Madison area who is a Walker supporter, said the Democratic state senators should allow the vote.

"It's time our state senators get back and do the job they were elected to do," said Ninneman, 51.

One of the union backers outside the rally, Jeannie Fiegel, 60, of Madison, said she wished those who were supporting the bill would get informed on all the issues at play. She said the protesters' efforts were paying off.

The rally's organizer, Americans for Prosperity, launched a $320,000 television ad campaign in support of Walker's proposal last month. The group is heavily financed by billionaire brothers David and Charles Koch, who own Koch Industries Inc. and who supported Walker's election campaign.

Last month Walker took a phone call from someone he thought was David Koch, but was actually a prankster. During the call Walker described several potential ways to pressure Democrats to return to the Statehouse and revealed that his supporters had considered secretly planting people in pro-union protest crowds to stir up trouble.