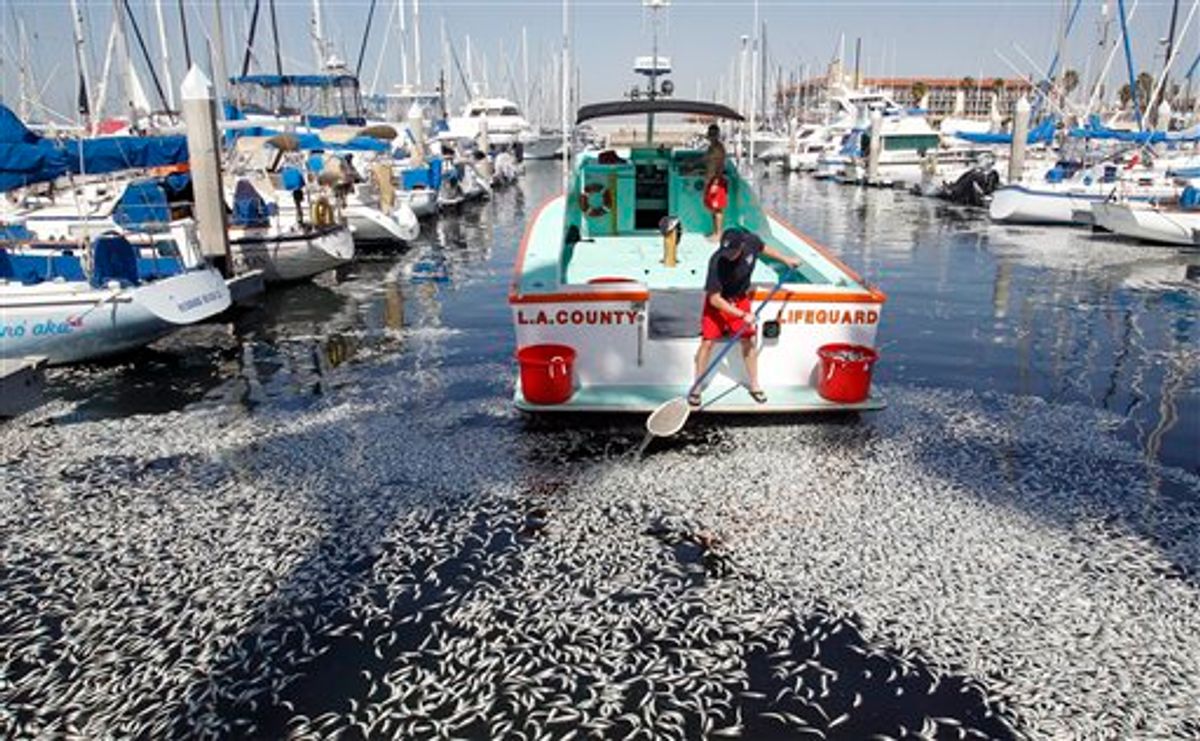 An estimated 1 million fish turned up dead Tuesday in a Southern California marina, creating a floating feast for pelicans, gulls and other sea life and a stinky mess for harbor authorities.

Boaters awakened to find a carpet of small silvery fish surrounding their vessels, said Staci Gabrielli, marine coordinator for King Harbor Marina on the Los Angeles County coast. Authorities said there was also a 12- to 18-inch layer of dead fish on the bottom of the marina.

California Fish and Game officials said the fish were sardines that apparently depleted the water of oxygen and suffocated.

"All indications are it's a naturally occurring event," said Andrew Hughan, a Fish and Game spokesman at the scene.

The die-off was unusual but not unprecedented, he said.

"In the world of fishing this is an afternoon's catch," he noted.

Nonetheless, the scale was impressive to locals at King Harbor, which shelters about 1,400 boats on south Santa Monica Bay.

"The fishermen say they've never seen anything this bad that wasn't red tide," Hughan said, referring to the natural blooms of toxic algae that can kill fish.

Hughan said water samples showed no oils or chemicals that could have contributed to the deaths. He said some of the fish were being shipped to a Fish and Game laboratory for study but the cause was likely to be uncomplicated.

The fish appeared to have come into the marina during the night and probably couldn't find their way out, he said.

"The simplest explanation is the fish got lost. ... They get confused easily," he said.

Hughan said there was no safety issue at all but "it's going to smell bad for quite a while."

Fire Department, Harbor Patrol and other city workers set to work scooping up fish in nets and buckets. A skip loader then carried them to big trash bins. Local officials initially estimated there were millions of fish, but Fish and Game roughly estimated about 1 million.

City officials estimated the cleanup would cost $100,000. Fire Chief Dan Madrigal said the fish would be taken to a landfill specializing in organic materials.

On the water, nature was tackling the problem in other ways.

"The seals are gorging themselves," Hughan said.

Large groups of other fish could be seen nibbling at the floating mats of dead creatures.

"The sea's going to recycle everything. It's the whole circle-of-life thing," Hughan said.

Although the Fish and Game authorities were focusing on the idea that the sardines simply got confused, other theories abounded.

Hughan noted that some fishermen reported waves were coming over the harbor breakwaters during the night. That washes bird excrement off the rocks and into the marina and can cause the water to be depleted of oxygen.

Gabrielli, the marina employee, said the fish appeared to have moved into the harbor to escape a red tide, then possibly became trapped due to high winds overnight.

Ed Parnell, a marine ecologist at Scripps Institution of Oceanography called Gabrielli's theory plausible, although generally he would expect that the wind would have mixed oxygen into the water. Parnell said these types of fish kills are more typically seen in the Gulf of Mexico or the Salton Sea, the enormous desert lake in southeastern California where millions of fish die with some regularity.

Brent Scheiwe, an official of Sea Lab, a Los Angeles Conservation Corps research program at Redondo, said the fish may have gotten trapped in the 30-foot deep marina while sheltering from rough seas overnight.

"They like to follow each other, so it only takes a few" to create a mass migration, he said.

"Over time they will find their way out, but if it's rough out there they probably stayed in shelter," he said.

Redondo Beach police Sgt. Phil Keenan said he believed a predator fish chased the sardines into the marina where their sheer numbers caused them to suffocate.

Raphael Kudela, a professor of ocean sciences at University of California, Santa Cruz, called it "unusual but not uncommon."

Kudela said sardines are not the brightest fish.

"They are that dumb actually," he said. "It's possible they were avoiding a red tide or a predator forced them into shallow water. They get into shallow water and then can't figure out how to get back out and you've got such a concentration in one small area they literally pull the oxygen down until they suffocate."

Carl Johnson, 59, and his wife, Marie, 57, came from nearby Torrance to see the fish calamity.

"We've had that stuff of the hundreds of birds dying in the Midwest and now this. ... You do think about life and death," he said.

"These fish were swimming freely yesterday," he said philosophically.