The truth about Newt and his cancer-stricken wife 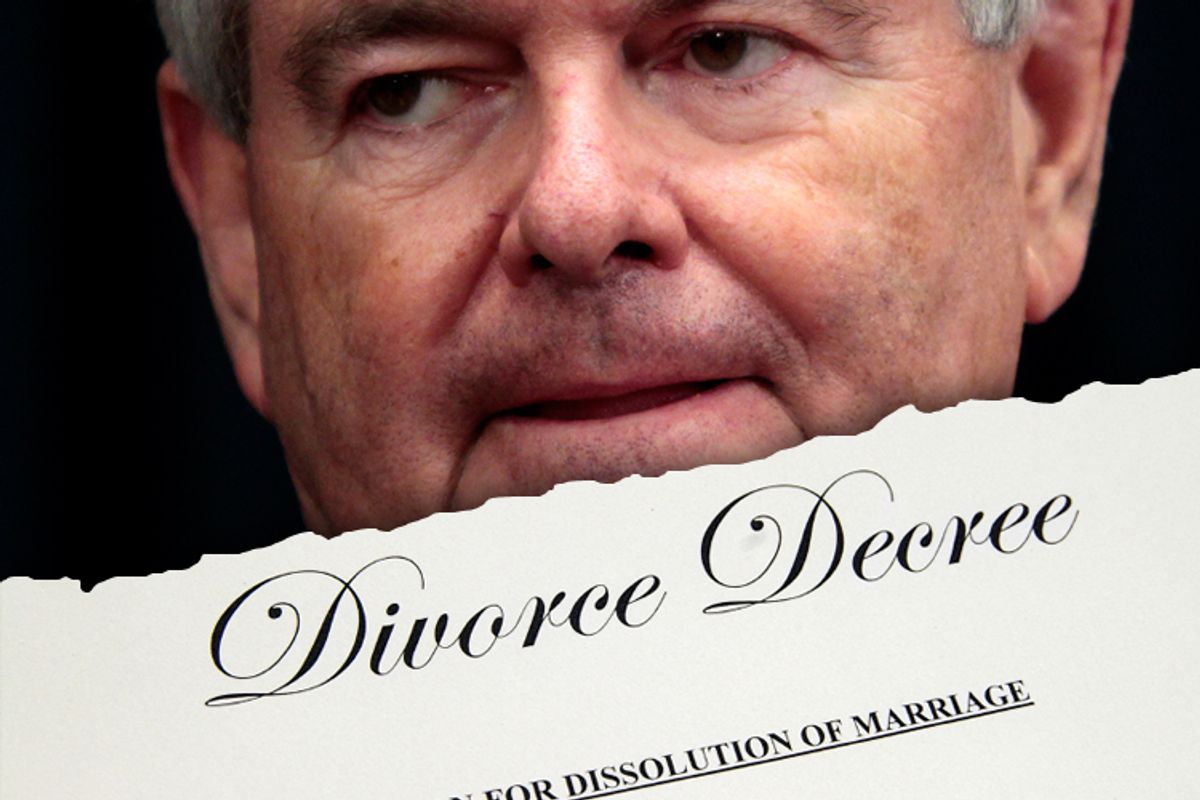 For almost three decades, Newt Gingrich has been dogged by a single devastating anecdote from his past, one that has been repeated in the national press hundreds of times and that has arguably come to define his political persona. After being elected to Congress in 1978 on a family values platform, the story goes, he visited his wife Jackie, who was in the hospital recovering from an operation for uterine cancer, and demanded that she discuss terms of their divorce.

It's a story that, remarkably, Gingrich disputes to this day. Testament to how deeply it has reverberated, some version of the story -- often rendered as Gingrich "serving divorce papers" to his wife in the hospital -- has been cited in the last month alone by Slate, MSNBC, Politico, Commentary and the New York Times, among other outlets.

The pattern of attention on the episode when Gingrich is in the news -- this time for exploring a presidential bid -- has been repeated ever since the anecdote originally appeared in the first big national profile of the then-Georgia congressman. That was a 1984 piece in Mother Jones written by David Osborne and headlined "Newt Gingrich: Shining Knight of the Post-Reagan Right."

"We thought it was going to be a piece about an intellectually interesting Republican," Osborne, who later worked for Vice President Al Gore and is now a consultant, told me. But when Osborne started talking to former Gingrich staffers and his ex-wife Jackie, he got some explosive material on Gingrich's alleged hypocrisy and moral failings, and the magazine rushed the story to publication before the 1984 election.

Jackie had undergone surgery for cancer of the uterus during the 1978 campaign, a fact Gingrich was not loath to use in conversations or speeches that year. After the separation in 1980, she had to be operated on again, to remove another tumor While she was still in the hospital, according to Howell, "Newt came up there with his yellow legal pad, and he had a list of things on how the divorce was going to be handled. He wanted her to sign it. She was still recovering from surgery, still sort of out of it, and he comes in with a yellow sheet of paper, handwritten, and wants her to sign it.

The source was Lee Howell, a former Gingrich campaign press secretary who had been the editor of the student newspaper at West Georgia College, where Gingrich was a history professor. As Osborne told me this week: "Most Gingrich staff people felt burned by the time they left. Howell was one of those people. But I also got [the story] from Jackie."

Interestingly, the hospital bed visit was hardly the most salacious detail in the piece -- though some of the other material was based on anonymous sources:

One former aide describes approaching a car with Gingrich's daughters in hand, only to find the candidate with a woman, her head buried in his lap. The aide quickly turned and led the girls away. Another former friend maintains that Gingrich repeatedly made sexual advances to her when her husband was out of town. On one occasion, he visited under the guise of comforting her after the death of a relative, and instead tried to seduce her. In certain circles in the mid-1970s, Gingrich was developing a reputation as a ladies' man.

A few months later, after the Mother Jones piece had been sent around en masse by Gingrich's political enemies -- and placed in the Congressional Record by giddy Democrats -- he told the Washington Post: "I am not going to argue every point of that story, but I will say that it painted a picture of me that is essentially untrue."

That same Post profile quoted Jackie herself giving a slightly different version of the story (one that doesn't mention any legal pad):

"He can say that we had been talking about [a divorce] for 10 years, but the truth is that it came as a complete surprise," says Jackie Gingrich, in a telephone interview from Carrollton. "He's a great wordsmith ... He walked out in the spring of 1980 and I returned to Georgia. By September, I went into the hospital for my third surgery. The two girls came to see me, and said Daddy is downstairs and could he come up? When he got there, he wanted to discuss the terms of the divorce while I was recovering from the surgery ... To say I gave up a lot for the marriage is the understatement of the year."

Asked if, in fact, he handled the divorce as insensitively as portrayed, Gingrich responded: "All I can say is when you've been talking about divorce for 11 years and you've gone to a marriage counselor, and the other person doesn't want the divorce, I'm not sure there is any sensitive way to handle it."

After the Mother Jones piece, every big Gingrich profile touched on the hospital encounter with Jackie.

In 1992, Gingrich, then House minority whip, faced a challenge from Tony Center, a Democratic attorney. Center  ran a brutal ad against Gingrich saying that the congressman "delivered divorce papers to his wife the day after her cancer operation." It went on: "the same Newt Gingrich who used taxpayer money for his limo had to be ordered by the court to pay for kids' heat and electricity. No more perks. No more lies. No more Newt."

Gingrich went on to win that election handily, but not before claiming he was so disgusted by the level of "filth" and "degradation" in politics that he had considered dropping out of the race.

When Gingrich won reelection in 1994, just before he ascended to the speakership, the cartoonist Mike Luckovich drew an item that showed the congressman "flanked by two brazen-looking beauties labeled 'D.C. highrollers,' with the three of them hovering over the hospital bed of a sickly looking woman labeled 'Georgia constituents,'" the AP reported. The top of the comic read, "I want a divorce." In retaliation, a furious Gingrich barred reporters from Luckovich's paper, the Atlanta Constitution, from his victory night party.

The anecdote was repeated ad nauseam when Gingrich became House speaker in 1995. Then it was repeated ad nauseam when he filed for divorce with his second wife, Marianne, in 1999. The story came up again in the mid-2000s when Gingrich was openly mulling a 2008 presidential bid. In 2007, when Gingrich told James Dobson in a radio interview that he had in the 1990s cheated on his second wife (with his current wife, Callista), several stories about the admission also noted the 1980 hospital encounter.

If Gingrich is really serious about a 2012 candidacy, expect the hospital story to stay with him throughout the campaign.