Where in the world is Barack Obama?

Blue Dog Sen. Joe Manchin attacks the president for failing to lead on the spending front. He's got a point 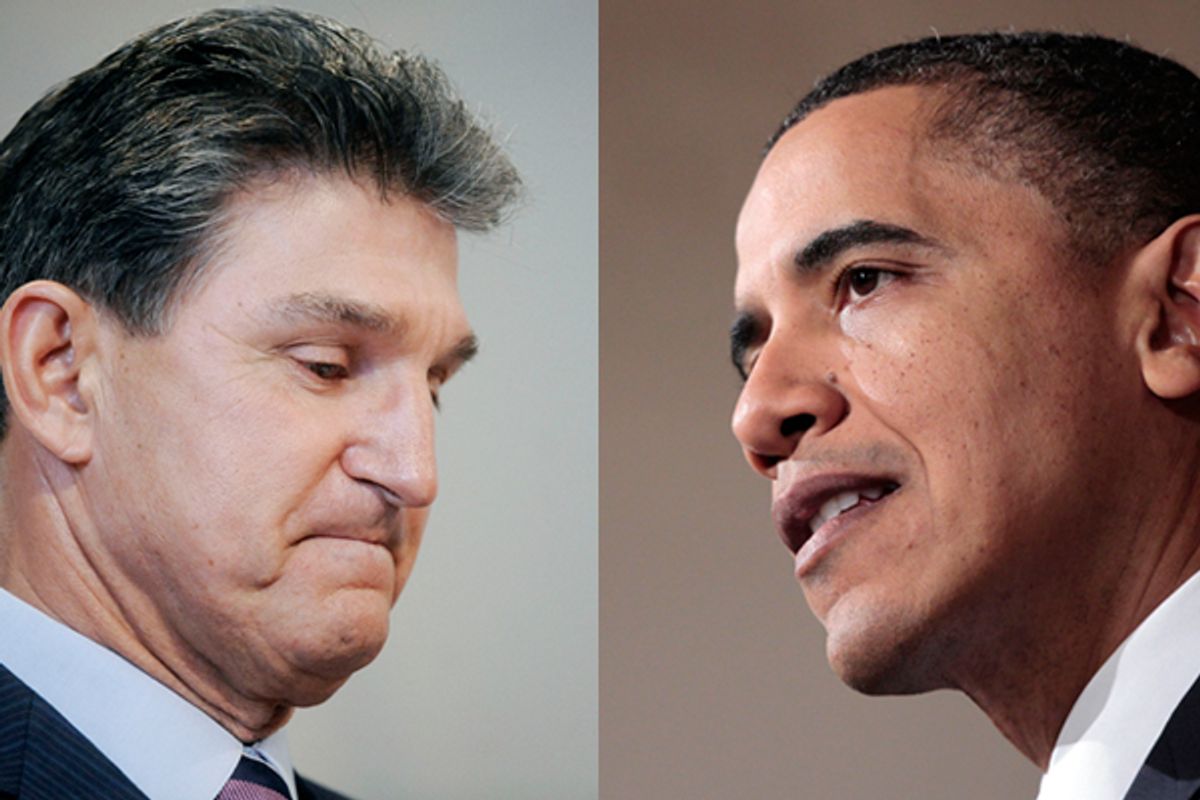 On Tuesday morning, the freshman Democratic senator from West Virginia, Joe Manchin, lambasted President Obama from the Senate floor, accusing him of a failure of leadership on the budget. Sometime in the next 24 hours the Senate will hold two "test votes" to measure support for two competing spending plans, and Manchin isn't happy with either.

We will likely have votes on two proposals today, and both options are partisan and unrealistic. And neither one will pass.

"The first is a Democratic proposal that doesn't go far enough. This proposal, which calls for $6.5 billion in new cuts, utterly ignores our fiscal reality -- our nation is badly in debt and spending at absolutely unsustainable and out-of-control levels. In February alone, the federal government outspent revenues by an unacceptable $223 billion. We must turn our financial ship around, but the Senate proposal continues to sail forward as if there's no storm on the horizon.

"Or, we could choose a second, even more flawed measure: a House GOP proposal that blindly hacks the budget with no sense of our priorities or of our values as a country."

Manchin ridiculed the charade -- neither proposal is expected to pass, and Manchin said he plans to vote against both -- and then put the spotlight on Obama:

"Why are we doing all this when the most powerful person in these negotiations -- our President -- has failed to lead this debate or offer a serious proposal for spending and cuts that he would be willing to fight for?"

One might question whether a guy whose very first act after getting elected senator was to skip two key Senate votes -- on immigration and "don't ask, don't tell" -- should be accusing other politicians of failing to demonstrate leadership. A cynic might also wonder if Manchin, who must run for reelection in 2012, has simply decided that attacking Obama polls well in West Virginia. But Manchin still has every right to slam the kabuki show in the Senate, and there's no question that Obama has kept a low profile on the budget struggle in recent days.

After signing the continuing resolution that will keep the government open until March 18, Obama designated Vice President Biden, chief of staff Bill Daley and budget director Jack Lew as his negotiators with Congress. Since then we haven't heard much from that corner, although one would guess that there are attempts at horse-trading going on behind the scenes. Obama has made his basic principles clear: He doesn't want cuts that endanger the economic recovery, or that undermine government efforts in "education, innovation and infrastructure." And one presumes that he isn't eager to defund Planned Parenthood, gut financial sector regulatory oversight, hamstring the EPA or go along with plans to underfund healthcare reform.

There's a theory that the Obama administration has decided that laying low and working behind the scenes is the best way to get anything done, because as soon as the president identifies something as a priority, opposition to it becomes a rallying point for Republicans. This is no doubt at least partially true, but it's a pathetic shield to hide behind. There are 10 days left until the current continuing resolution runs out. Soon enough, bluffs must be called. If the president has priorities he wants to fight for, he has to be willing to embrace the possibility of a government shutdown, because that is the only ultimate leverage either side holds in this game.

For now, Obama seems to be waiting to see which way Senate moderates are going to go. But he's taking an awfully big risk that they are going to buckle under Republican pressure, if they aren't assured of covering fire from the White House first.