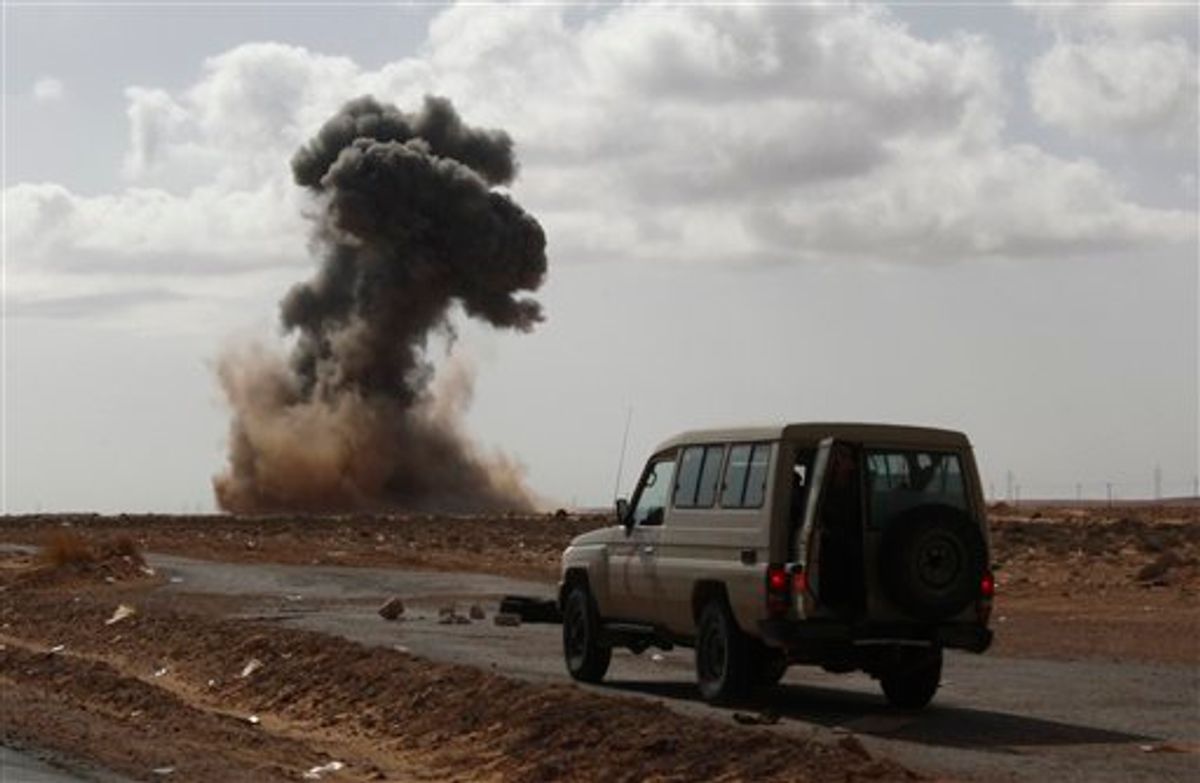 Forces loyal to Moammar Gadhafi hammered rebels with rocket barrages and airstrikes Tuesday, trying to check their advance out of the opposition-held east of Libya toward the capital Tripoli. At least 20 were wounded, some of them seriously.

On another front, government forces were reportedly battering down resistance in the closest rebel-held city to Tripoli, Zawiya. A government official claimed Gadhafi loyalists had recaptured the city, but some residents reported that rebels still held the city's main square amid a heavy barrage of residential areas. The city was sealed off and phone lines have been cut, making it impossible to verify the account.

All told, the government seems to have gained the upper hand for now in its counteroffensive against the rebels over the past few days. But the battle is far from over and could be drawn out into a long and bloody civil war.

Gadhafi's forces have brought overwhelming force from the air to try to beat back the rebels in the east seeking to march on Tripoli and on the ground to try to retake control of Zawiya, just 30 miles west of Tripoli.

The one thing that seems to hold potential to tip the scales in the rebel's favor is international intervention. The U.S. says it has not ruled out using some type of military force against Gadhafi and with its allies, it is considering imposing a no-fly zone over the North African country to stop air attacks on the rebels.

In the east on Tuesday, government forces unleashed a heavy barrage of rockets on a rebel contingent that tried to move out from their position at the oil port of Ras Lanouf. At least 20 wounded were rushed to the hospital in the town, some of them with legs lost and other serious injuries.

"I was hit in the arm and leg, my friend was wounded in the stomach," Momen Mohammad, 31, said while lying in a hospital bed.

The fighting began when the rebel forces advanced west out of Ras Lanouf toward Bin Jawwad, a small town 375 miles (600 kilometers) east of the capital, fighters said.

Earlier in the day, warplanes launched at least five new airstrikes near rebel position in Ras Lanouf, one hitting a two-story house in a residential area, causing some damage. None of the strikes appeared to cause casualties, suggesting they were intended to intimidate the fighters, according to an Associated Press reporter who saw the strikes. The anti-regime forces were not taking any chances and were spreading out deep inside the desert around the area in small groups.

Over the past few days, rebels moved out of their stronghold in the east, capturing with relative speed the oil ports of Brega and Ras Lanouf. But they were met with superior firepower and airstrikes when they tried to push westward and beat a fast retreat to Ras Lanouf over the past two days.

The rebels seem to have reached a point of their campaign where they need to figure out how they could organize resupply lines and avoid becoming easy targets for warplanes in their march across the open desert region with little cover. The extent of their westward reach is a checkpoint about six miles (10 kilometers) west of Ras Lanouf.

Zawiya, on Tripoli's western doorstep, is the most significant position the opposition has held in the largely Gadhafi-controlled northwest of the country. After repelling several attacks the past week, the city has come under the heaviest onslaught yet since the weekend, believed to be an elite brigade commanded by one of Gadhafi's sons, Khamis.

One resident, who fled the city on Monday, reported that pro-Gadhafi forces had taken the city's main square, where rebels and protesters had been camped out for weeks, after bombardment that caused heavy damage.

Mohammed Hamza, an adviser in Libya's Foreign Ministry in Tripoli who is originally from Zawiya, said Tuesday that government forces were in control, raising the green flag of Gadhafi's rule in the square.

But a resident of the nearby town of Sabratha said people who fled from Zawiya on Tuesday afternoon told him fighting continued, with rebels back in control of the square. He said the residents reported government forces controlling the entrances to the city were heavily shelling residential neighborhoods with tank and artillery fire. They said the city hospital was overwhelmed with dead and wounded and many homes had been damaged.

The various reports could not be independently confirmed. Electricity, phone and Internet services have all been cut in the city, making it impossible to reach witnesses in Zawiya.

In Benghazi, Libya's second largest city and the main rebel stronghold in east, there was an unusual attack after weeks of quiet that followed the rebel capture of the territory. Assailants in a car tossed a grenade at a hotel where foreign journalists were staying, but there were no casualties and only some light damage to windows, an opposition official said.

Representatives of the opposition said they have received an offer to negotiate the terms of Gadhafi's departure. However, they could not confirm whether the envoy who made the offer was authorized by the regime and said in any case, they would not negotiate with the government. Libyan state television denied that Gadhafi had sent an envoy to talk to the rebels.

The rebels are fighting to oust Gadhafi from power after more than 41 years, inspired by protesters who managed to topple authoritarian rulers in neighboring Tunisia and Egypt. However, the Libyan uprising has already proved much more violent.

The latest round of fighting on opposite ends of Libya's Mediterranean coast once again revealed the weakness and disorganization of both sides in the conflict.

Gadhafi's regime has been using its air power advantage more each day to check a rebel advance west toward Tripoli on the main highway leading out of the opposition-controlled eastern half of the country. The increasing use of air power underlines the vulnerability of the rebel forces as they attempt to march in open terrain along the Mediterranean coast and could prompt world powers to impose a no-fly zone over Libya to deny Gadhafi that edge.

The United States and its NATO allies edged closer Monday to formulating a military response to the escalating violence in Libya as the alliance boosted surveillance flights over the country and the Obama administration signaled it might be willing to help arm Gadhafi's opponents. Europe, meanwhile, kick-started international efforts to impose a no-fly zone.

It still appeared unlikely that U.S. warplanes or missiles soon would deploy in Libya, which has been sliding toward civil war, but the continuing violence increased pressure on Washington to do something or at least spell out its plan.

In Zawiyah, 30 miles (50 kilometers) west of Tripoli, government forces and rebels who had been in control of the city fought for weeks with the power tipping back and forth between the two sides.

After the government brought overwhelming firepower in a counteroffensive that lasted all weekend, the city fell to Gadhafi's forces by Monday night.

The government heavily shelled the city with tank artillery and mortars, according to a witness who spoke to The Associated Press by phone. He said Gadhafi's tanks and fighting vehicles were roaming the city and firing randomly at homes. The witness spoke on condition of anonymity because he feared reprisals.

In Benghazi, a spokesman for the newly created Interim Governing Council said a man who claimed to represent Gadhafi has made contact with the council to discuss terms for Gadhafi to step down. Mustafa Gheriani told the AP the council could not be certain whether the man was acting on his own initiative or did in fact represent the Libyan leader.

"But our position is clear: No negotiations with the Gadhafi regime," said Gheriani, who declined to say when contact was made or reveal the identity of the purported envoy.

Still, Western military intervention does not seem imminent -- and the warnings may be an attempt to intimidate Gadhafi with words before deeds.

British and French officials said the no-fly resolution was being drawn up as a contingency and it has not been decided whether to put it before the U.N. Security Council, where Russia holds veto power and has rejected such a move.

Western officials have said a no-fly zone does not require a U.N. mandate, but they would prefer to have one.

Michael reported from Tripoli. Ryan Lucas contributed to this report from Benghazi, Libya.