The neocons are trying to talk us into war -- again 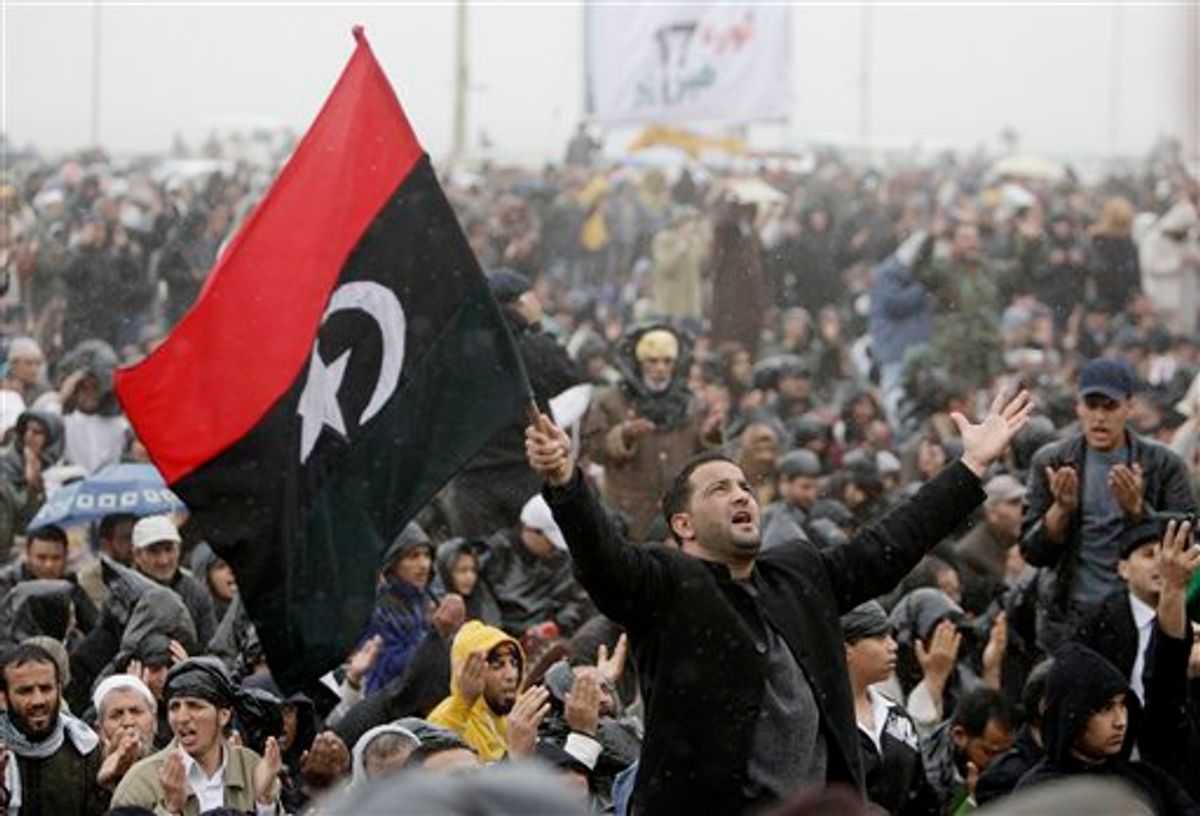 An anti-Libyan Leader Moammar Gadhafi protester prays as he holds the old Libyan flag, during the Friday prayer at the court square, in Benghazi, eastern Libya, Friday March 4, 2011. Fighters loyal to Moammar Gadhafi set up checkpoints in Tripoli, searching cars, ahead of planned anti-government protests Friday, raising fears of new bloodshed in the Libyan capital where a heavy crackdown the past week has spread fear among residents. (AP Photo/Hussein Malla) (AP)
--

"They have learned nothing and forgotten nothing," Voltaire said of the members of the Hapsburg dynasty of his day. The same might be said of the American hawks who are calling for U.S. military intervention in Libya's civil war.

Sens. John McCain and Joe Lieberman, along with others, have raised the possibility of establishing "no-fly zones" in Libya, along the lines of those in Iraq between the end of the Gulf War in 1991 and the beginning of the Iraq War in 2003, in order to prevent Libyan dictator Moammar Gadhafi from using his air force to bomb the rebels seeking to overthrow his regime. Another suggestion is to help Libyan rebels establish secure enclaves, from which they can capture the rest of the country from forces loyal to Gadhafi.

The implication is that the enforcement of "no-fly zones," by the U.S. alone or with NATO allies, would be a moderate, reasonable measure short of war, like a trade embargo. In reality, declaring and enforcing a no-fly zone in Libya would be a radical act of war. It would require the U.S. not only to shoot down Libyan military aircraft but also to bomb Libya in order to destroy anti-aircraft defenses. Under any legal theory, bombing a foreign government's territory and blasting its air force out of the sky is war.

Could America's war in Libya remain limited? The hawks glibly promise that the U.S. could limit its participation in the Libyan civil war to airstrikes, leaving the fighting to Libyan rebels.

These assurances by the hawks are ominously familiar. Remember the phrase "lift-and-strike"? During the wars of the Yugoslav succession in the 1990s, Washington’s armchair generals claimed that Serbia could easily be defeated if the U.S. lifted the arms embargo on Serbia’s enemies and engaged in a few antiseptic airstrikes. Instead, the ultimate result was a full-scale war by NATO. Serbia capitulated only when it was faced with the possibility of a ground invasion by NATO troops.

Undeterred by the failure of lift-and-strike in the Balkans, neoconservatives proposed the same discredited strategy as a way to remove Saddam Hussein from power in Iraq. Paul Wolfowitz and others proposed the creation of enclaves in Iraq, from which anti-Saddam forces under the protection of U.S. airpower could topple the tyrant. Critics who knew something about the military dismissed this as the "Bay of Goats" strategy, comparing it to the Kennedy administration's failed "Bay of Pigs" operation that was intended to overthrow Fidel Castro without direct U.S. military involvement by landing American-armed Cuban exiles in Cuba. In Iraq, as in the Balkans, the ultimate result was an all-out U.S. invasion followed by an occupation.

In Afghanistan, Afghan rebels played a key role in deposing the Taliban regime. But contrary to the promises of the Bush administration that the Afghan War would be short and decisive, the objective was redefined from removing the Taliban to "nation-building" and the conflict was then thoroughly Americanized. The result is today’s seemingly endless, expensive Afghan quagmire.

The lesson of these three wars is that the rhetoric of lift-and-strike is a gateway drug that leads to all-out American military invasion and occupation. Once the U.S. has committed itself to using limited military force to depose a foreign regime, the pressure to "stay the course" becomes irresistible. If lift-and-strike were to fail in Libya, the same neocon hawks who promised that it would succeed would not apologize for their mistake. Instead, they would up the ante. They would call for escalating American involvement further, because America’s prestige would now be on the line. They would denounce any alternative as a cowardly policy of "cut and run." And as soon as any American soldiers died in Libya, the hawks would claim that we would be betraying their memory, unless we conquered Libya and occupied it for years or decades until it became a functioning, pro-American democracy.

Those who are promoting an American war against Gadhafi must answer the question: "You and whose army?" The term "jingoism" comes from a Victorian British music-hall ditty: "We don’t want to fight but by Jingo if we do,/ We've got the ships, we've got the men, we've got the money too." Unfortunately for 21st-century America's jingoes, we haven’t got the ships, the men or the money. The continuing wars in Iraq and Afghanistan have stretched U.S. military manpower to the limits. The U.S. has paid for these wars by borrowing rather than taxation. The long-term costs of these conflicts, including medical care for maimed American soldiers, will run into the trillions, according to the economists Joseph Stiglitz and Linda Bilmes.

If a lift-and-strike policy failed, and the result was a full-scale American war in Libya, how would Sen. McCain propose to pay for it? Republicans since Reagan have preferred to use deficit spending rather than taxes to pay for wars and military buildups. No doubt the Republican hawks would support paying for a Libyan war, like the Iraq and Afghan wars, by adding hundreds of billions or trillions to the deficit, even as they claim that non-military programs are bankrupting the country.

Napoleon and Hitler were brought down when they foolishly fought wars on two fronts. In hindsight they look like strategic geniuses compared to the American hawks who, not content that the U.S. is fighting two simultaneous wars in the Muslim world, are recklessly proposing a third.

Fortunately, the American people in 2008 chose not to entrust Sen. McCain with the office of commander in chief. While his domestic policy has been too timid and incremental, in his foreign policy Barack Obama has proven to be the cautious realist that America needed after the trigger-happy George W. Bush. His prudence is shared by his conservative secretary of defense, Robert Gates, who recently told an audience of West Point cadets:

"In my opinion, any future defense secretary who advises the president to again send a big American land army into Asia or into the Middle East or Africa should 'have his head examined,' as General MacArthur so delicately put it."

Gates is right. Those who propose U.S. military intervention in Libya, even as the U.S. remains bogged down in Iraq and Afghanistan, should get their heads examined.