Will future generations understand "The Simpsons"?

When shows like "Glee" and "Community" make pop culture references, are they writing their own death certificates? 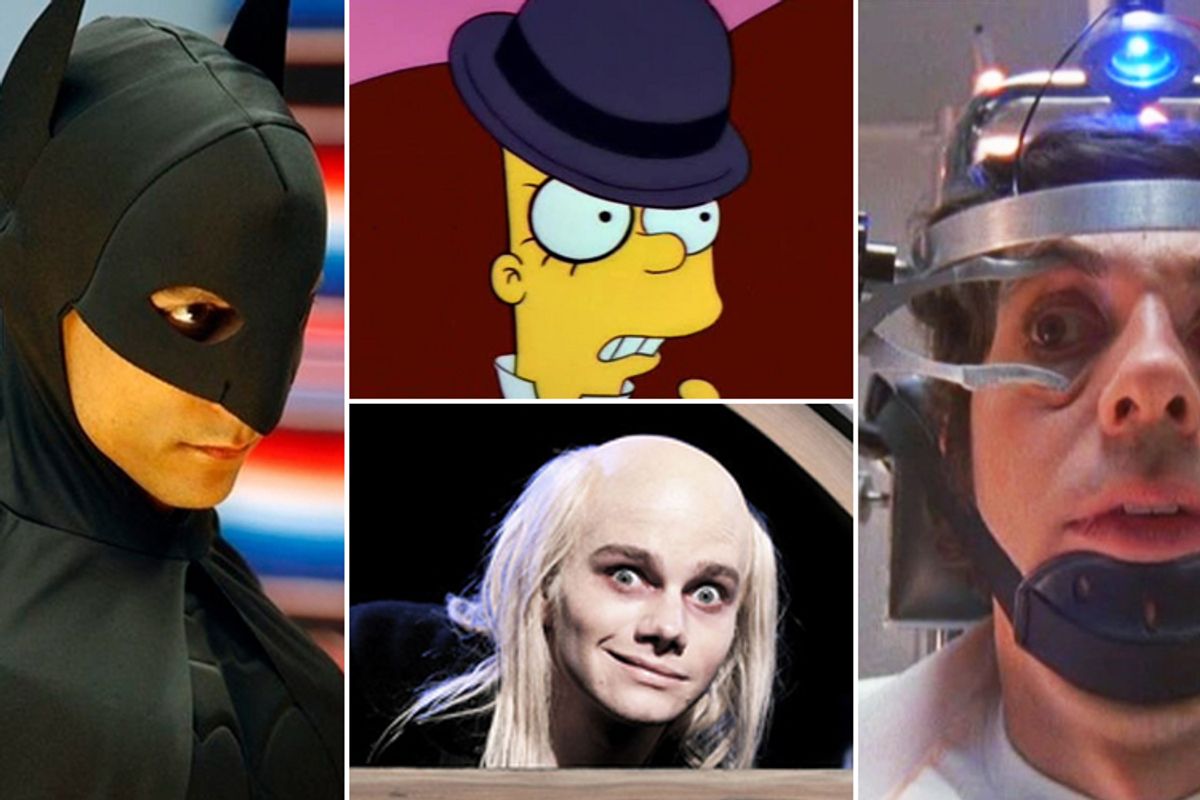 Clockwise from left, stills from "Community," "The Simpsons," "Chuck" and "Glee"
--

I recently rewatched "Krusty Gets Kancelled" from Season 4 of "The Simpsons" with my 13-year-old daughter and 7-year-old son. Krusty the Klown was on "Springfield Squares," a game show hosted by moonlighting Springfield newsman Kent Brockman and featuring special guest Rainer Wolfcastle, the action film icon. Brockman introduced Wolfcastle as the star of the new movie, "Help, My Son is a Nerd!"

Wolfcastle: "My son returns from a fancy East Coast college, and I'm horrified to find he's a nerd."

Rainier Wolfcastle: "It's not a comedy."

I laughed at this. My son laughed, too -- but after a moment he asked, "Dad, why is that funny?"

I told him it was too complicated to explain, because it was.

Wolfcastle was "The Simpsons"' stand-in for Arnold Schwarzenegger, a wildly popular movie star circa 1992-93, when that episode first aired. Schwarzenegger built his fortune on bloody action thrillers, but had recently begun playing against type in such dumb but harmless comedies as "Twins" and "Kindergarten Cop." The movie Wolfcastle was promoting was obviously in that vein, but the plot evoked the 1986 Rodney Dangerfield comedy "Back to School." Wolfcastle's line, "It's not a comedy" was also a joke at the expense of phony '80s macho; the very idea of nerdiness would horrify a gym-muscled dolt like Wolfcastle.

There were a couple of marginal jokes in the scene, too. Brockman's moonlighting on "Hollywood Squares" acknowledged a long tradition of newscasters working as game show hosts and commercial pitchmen on the side (see Wallace, Mike). And "Springfield Squares" is a sendup of 1970s game shows in the vein of "Hollywood Squares" and "Tic Tac Dough." The rest of the episode contained references to the 1929 film "The Great Gabbo," Eastern European animation, Joey Bishop, "Howdy Doody," Ed Sullivan's censoring the lyrics of the Doors' "Light My Fire," the 1968 "Elvis" TV special, the Red Hot Chili Peppers' penchant for nudity, and Bette Midler serenading Johnny Carson during his final week on "The Tonight Show."

Do all or even most of these gags connect with a viewer under 25 who isn't a 20th century pop culture junkie? I doubt it. Granted, some of the jokes were inside even for 1992-93 -- "The Great Gabbo" and the Eastern bloc cartoon "Worker and Parasite," for instance. But most weren't. They referred to things that were current or that felt that way, thanks to syndication or shared childhood viewing experiences. Circa 2011 that's no longer the case. "Krusty Gets Kancelled" is one of the greatest of all "Simpsons" episodes, but if it were a poem, it would need to have nearly as many footnotes as "The Waste Land" -- and the further away from its original air date we get, the truer that's going to be.

So much post-"Simpsons" comedy is in that vein: "Seinfeld," "Friends," "South Park," "Family Guy" and its spinoffs. Not to mention such recent arrivals as "Community," "Chuck," "Parks and Recreation," "Glee," "30 Rock" and the American version of "The Office." They're all footnote shows: amusing and perhaps hilarious right now, but likely to be dated in five years, quaint in 10, and borderline impenetrable in 20. Or inadvertently poignant. Or chilling.

Remember Bart and Lisa watching the "School House Rock" parody "I'm an Amendment to Be" in a 1996 episode "The Day the Violence Died"? "It's one of those campy '70s throwbacks that appeals to Generation X-ers," Lisa says. "We need another Vietnam to thin out their ranks," Bart says coldly -- a line that would be a lot funnier if the United States had not, in fact,  gotten involved in another Vietnam seven years later.

Comedies saturated with pop culture references can be a lot of fun, and on a few recent occasions I've even used them as a way to connect with my kids. These shows are virtual museums of pop culture history, honoring certain entertainers and works and perhaps introducing them to future generations. After the Madonna and "Rocky Horror" episodes of "Glee," my daughter and I watched bits of the source material being referred to, and had a fun conversation about appropriation and theft and whether there was any real difference between them. The Madonna episode was especially interesting because it referenced Madonna's "Material Girl" video, which in turn was a parody of Marilyn Monroe's "Diamonds Are a Girl's Best Friend" -- which made the "Glee" number a spoof of a spoof.

But all things considered, if I want to bond with my daughter I'd rather take her to lunch or the park. If the first half of "The Simpsons'" endless run has held up, it's because of the characters and stories, the timing of certain lines and sight gags, and the phenomenal voice work. (When my daughter was an infant, Krusty's voice used to make her laugh hysterically.) Most episodes of "The Simpsons" made after 1998-99 -- the last consistently watchable season -- are gag-fests based around Homer's escalating stupidity and selfishness, and fast-and-furious "SNL"-style pop culture references. "The Simpsons" used to mix highbrow and lowbrow gags, and timeless and timely humor, but that rich mixture was simply too difficult to sustain. So it became a pop culture reference factory, not unlike "The Family Guy" -- a consistently ruder, funnier show that was nonetheless never as rich as "The Simpsons," and that looted Matt Groening's cartoon like a department store during a blackout.

This season's "Homer the Father" seemed to acknowledge the show's tiredness by having Homer become obsessed with a TV Land-style cable channel showing repeats of "Thicker Than Waters," a fictional 1980s sitcom written by David Mamet. Homer wore an early-'80s-style "Cosby Show"-type sweater the entire time, and when the episode was about to cut to a commercial, Homer said that Bart's exit line "could be a hell of an act break" but "could use a button."  That's the default mode of TV comedy now: Reference-o-Rama.

You can see it exemplified on NBC's "Community," which never met a reference, or a meta-reference, that it didn't want to embrace and that -- like "The Simpsons" -- already seems torn between character-and-story-based comedy and something flashier and more disposable. This season's "Basic Rocket Science" episode  -- which lampooned "Apollo 13," "2001," 1980s video game graphics, KFC and TV product placement, among other subjects -- was fitfully amusing but quite shallow and forgettable. The Christmas episode -- which was built around 1970s-style Rankin-Bass puppetoon imagery -- was more surprising, weirder and darker, and ultimately more about the psychology of one major character, Abed Nadir (Danny Pudi), than any of its marginalia. On March 24 the series is airing a sendup of "Pulp Fiction." How much you wanna bet there'll be a joke about the choice of subject being very mid-'90s?

The show's heart often plays like "heart" -- much more so than NBC's "Parks and Recreation," a more earnest and authentically warm series that has more to do with observable reality than pop culture riffing. Where "Parks and Rec" expertly balances in-the-moment character comedy and reference-based humor (such as Mark's "I Fell in the Pit" from Season 1, a sendup of pompous early-'90s grunge rock), "Community" is so acutely self-aware that it comments on its own jokes, comments on the fact that it's commenting on its own jokes, and preemptively guesses how viewers might try to describe it. But the most self-consciously self-conscious episode of "Community" is less shallow and gimmicky than NBC's "Chuck," which really does feel like a long "Saturday Night Live" sketch -- specifically one of those loopy, half-baked sketches that airs right before the final signoff when nobody's watching. It's the "Family Guy" of live-action comedy -- which is to say if it were a person, it'd be that kid in the fourth grade who did the same funny catchphrase over and over and always made you laugh until you spit milk through your nose.  It's a pleasure to know that kid, but his humor doesn't travel well.

To varying degrees, all these shows have given me joy, and no, I don't think self-aware comedy is an inherently less worthy form than any other. But there's a downside: a lack of durability.  Some of the most buzz-worthy TV comedies of the last 25 years have proved as sturdy as tissue paper. Even the great ones from the '90s ("The Simpsons" and "Seinfeld") are starting to seem as era-specific as high-top fades and Koosh balls. "I Love Lucy," "The Andy Griffith Show," "The Mary Tyler Moore Show," "Cheers" and other pre-'90s sitcoms didn't start to seem dated or irrelevant for decades, probably because they kept the pop culture references to a bare minimum; the more recent hit comedies are starting to exude that expired fish stench while they're still on the air.  Can a show still call itself a comedy if you have to explain why it's funny?