Can someone tell John Boehner what "broke" means?

The House speaker says the U.S. can't pay its bills. How many times do we have to point out he's wrong? 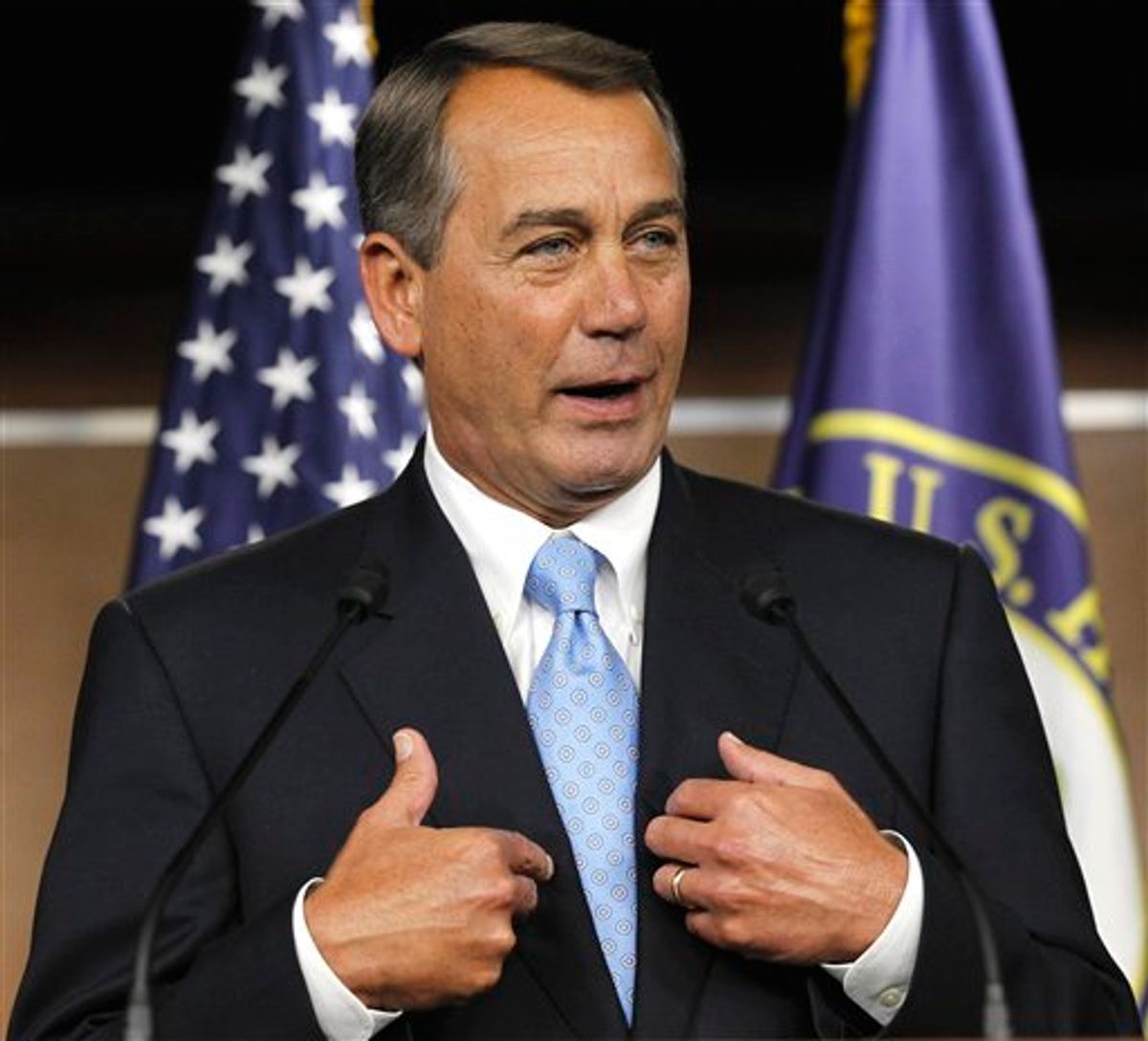 David Lynch's Bloomberg report, "Bonds Show Why Boehner Saying We're Broke Is Figure of Speech," won't win any awards for inspired headline writing, but it should nevertheless be tattooed onto the backside of every legislator currently whining about the supposedly parlous state of the United States' finances. Despite the speaker of the House's constant harping, we're not "broke."

The U.S. today is able to borrow at historically low interest rates, paying 0.68 percent on a two-year note that it had to offer at 5.1 percent before the financial crisis began in 2007. Financial products that pay off if Uncle Sam defaults aren't attracting unusual investor demand. And tax revenue as a percentage of the economy is at a 60-year low, meaning if the government needs to raise cash and can summon the political will, it could do so...

Financial markets dispute the political world's conclusion. The cost of insuring for five years a notional $10 million in U.S. government debt is $45,830, less than half the cost in February 2009, at the height of the financial crisis, according to data provider CMA data. That makes U.S. government debt the fifth safest of 156 countries rated and less likely to suffer default than any major economy, including every member of the G20....

Americans also aren't overtaxed compared with residents of other advanced nations. In a 28-nation survey, only Chile and Mexico reported a lower total tax burden than the U.S., according to the Organization for Economic Development and Cooperation.

Let's repeat that in clear language. Of all the rich economies in the world, financial markets consider the U.S. the safest. We are able to borrow money at rates far below historic averages. And if we wanted to, we could make a huge dent in our deficit simply by raising taxes, without doing undue long-term harm to our economy.

The Republican response to these facts are instructive.

"If an American family is spending more money than they're making year after year after year, they're broke," said Michael Steel, a spokesman for Boehner.

It does my heart good to finally hear a Republican admit that markets can make mistakes. Because, after all, this is one reason we need governments around, so we can fix things when markets fail. In fact, that's precisely why we have so much red ink at the state and federal level right now, because the government has been on the hook for a massive market failure, requiring huge outlays in social welfare spending at exactly the same time that tax revenue has plummeted.

Are the markets making a mistake now by their willingness to lend the U.S. government money at such low cost? I guess we'll find out the answer to that somewhere down the line, but in the meantime, it's just fascinating to see conservatives finally admit that markets are fallible -- just when their judgment happens to be the exact opposite of the Republican Party line.

As for spending more money than one makes being the definition of "broke" -- well, who would know better about that than the Republicans who inherited a balanced budget budget in 2000 and then proceeded to spend more than they made for the next six years, while controlling the House, the Senate and the presidency? If you cut taxes without cutting spending, then by Boehner's spokesman's own definition, you have steered directly into "broke" waters.

So here's a question. Which is more fiscally responsible: Deficit spending during a recession, when demand has collapsed, and the federal government is the only entity with the wherewithal to jolt the economy back into life, or the conscious creation of a deficit while the economy is doing fine, thereby leaving no slack for action when things go wrong?