A Madison couple managed to work a pro-public worker rally into their busy wedding day. The bride explains why 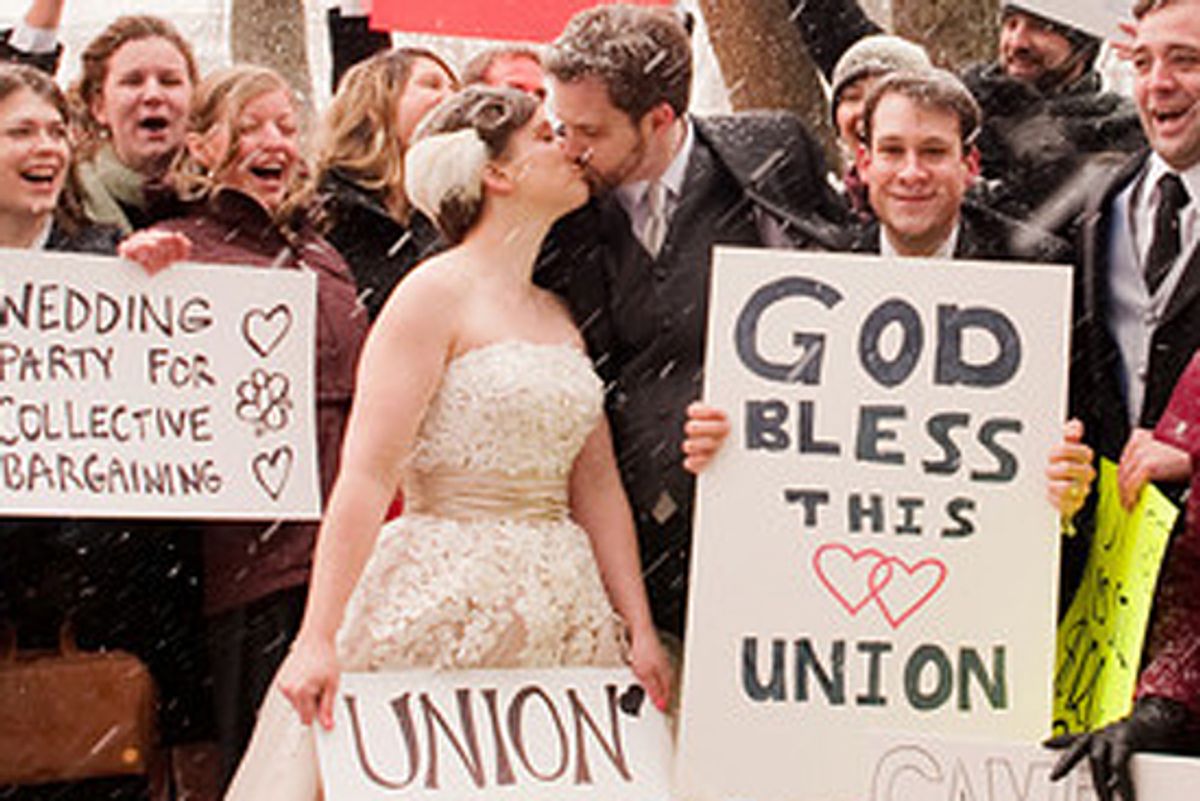 After I wrote about the big Wisconsin rallies mostly ignored by the media on the weekend of Feb. 26, I got a charming photo from a woman who'd spent part of her wedding day, with her husband and wedding party, at that Saturday's protest against Gov. Scott Walker's union-busting. I tweeted the photo, and it made the rounds. I wanted to use it with my Wisconsin article Monday, and I asked the woman who sent it if she'd give me a little bit more information about herself, and why she chose to join the rally on her wedding day. When I got her fascinating reply, I couldn't imagine chopping it into a couple of sentences to identify her, so I asked if I could publish it here, and she agreed. Here it is:

Thank you so much for tweeting the photo in the first place. We are so happy that this is getting out there because it seems like it really brings people joy in this tiring battle. I would love it if you blogged about us. You can certainly use my name – I'm Heather Allen and the groom is David Sensenbrenner.

David and I met in high school here in Madison and we were friends through college (I went to UW and he attended another local school Edgewood College). David's is distantly related to the Congressman James Sensenbrenner (R) and he is the son of former Madison Mayor Joe Sensenbrenner (D).

In August 2008 we reconnected through mutual friends at the Great Dane, a bar just off the Capitol square and started dating long-distance. He was working for himself doing investments living in Madison, and I worked in Washington DC doing environmental policy - first for the federal government and then with a non-profit environmental group. Last year on Valentine's Day, David proposed to me on a visit to Washington D.C. and shortly thereafter he moved out to D.C.

In January of this year, David and I moved back home to Madison to be closer to our families, just as Walker's true objectives were becoming apparent. My father, who is not normally very political, had already protested Walker's decision to reject over $800 million in federal funding for high speed rail in Wisconsin. He and his fellow model train enthusiasts were crushed (along with many others), but that was only the beginning in extraordinarily bad decisions Walker was making unilaterally for Wisconsin.

When the "budget repair bill" was first announced we first began to hear from many of our friends and family employed by the State about how drastic the cuts would be and then the provisions to remove collective bargaining became more widely known and we started to get involved. We spent several days marching at the Capitol in the weeks leading up to the rallies. We took a closer look at the bill and discovered the other dastardly provisions - selling off the state power plants in no-bid contracts, a tax incentive to build on wetlands, and dramatic cuts to Wisconsin's health care programs for low-income children and families. We were incredulous.

During the first two weeks after the bill was introduced, people were protesting around the clock. State Assembly Democrats held hearings 24 hours a day, for days on end. I testified at one of those hearings among teachers and state employees. I testified at 1:30 in the morning and the room was packed for the three hours I was there. There were special education teachers testifying with tears in their eyes that they needed their unions to protect them because sometimes they get injured on the job by the children they care for, and they need to know they will be taken care of. A Milwaukee teacher testified that she secretly visited a community food bank every week to feed her family of five, since her husband lost his union manufacturing job in 2009. The most amazing part about that story was that her fellow teachers who traveled with her to Madison did not know her secret. The whole room erupted in a standing ovation when she spoke. It was heartbreaking.

On the Tuesday before our wedding at a rally the firefighters union announced they would be sleeping in the Capitol to protest the bill, so I asked a few friends from the wedding party to sleep over too. We stayed the night, sleeping on the second floor of Capitol. It was quiet and peaceful at night and in the morning when the sun sparkled through the Capitol Dome it was truly beautiful.

So we have been there almost every day to show our support along with our family and friends. It couldn't have been more natural for us to be there on our wedding day. That morning before my hair appointment, I grabbed a bunch of the posters we already had up in our window, and we made a few more as we were getting ready. And we sent text messages to invite people attending the wedding to join us. Around 2:30 PM our whole group walked to the rally from the hotel where we had planned to meet for photos. We loved being at the rally - and it seemed like the crowd really enjoyed it too. After the protest we went to take some more traditional wedding party photos at the Memorial Union, which later hosted our reception, and then we made it to the Pres House for our wedding ceremony at 5:00 PM, which was truly beautiful.

That was probably more than you needed to know, but I can't thank you enough for following this story - we have been so amazed at the kindness of all the protestors and the civility of the police too. People in Wisconsin are extraordinarily nice, probably because we generally care for one another. Walker's bill is trying to divide us but there is a human cry to stop him, and I think we keep getting louder! The protest this last Saturday March 5 was equivalent to or bigger than the approximately 100,000 we saw on our wedding day.

P.S. Oh and one last thing - this was the prayer we had read at our wedding. It couldn't have been more timely.

(From “The New Jewish Wedding” By Anita Diamant )

We acknowledge the Unity of all within the sovereignty of God, expressing our appreciation for this wine, symbol and aid of our rejoicing.

We acknowledge the Unity of all within the sovereignty of God, realizing that each separate moment and every distinct object points to and shares in this oneness.

We acknowledge the Unity of all within the sovereignty of God, recognizing and appreciating the blessing of being human.

We acknowledge the Unity of all within the sovereignty of God, realizing the special gift of awareness that permits us to perceive this unity and the wonder we experience as a man and a woman joined to live together.

May rejoicing resound throughout the world as the homeless are given homes, persecution and oppression cease, and all people learn to live in peace with each other and in harmony with their environment.

From the Divine, source of all energy, we call forth an abundance of love to envelop this couple. May they be for each other lovers and friends, and may their love partake of the same innocence, purity, and sense of discovery that we imagine the first couple to have experienced.

We acknowledge the Unity of all within the sovereignty of God, and we highlight today joy and gladness, bridegroom and bride, delight and cheer, love and harmony, peace and companionship. May we all witness the day when the dominant sounds through the world will be these sounds of happiness, the voices of lovers, the sounds of feasting and singing.

Praised is love; blessed be this marriage. May the bride and bridegroom rejoice together.