The arranged marriage my parents won't give up on

I'm a 30-year-old, single Indian American woman. My parents think I'm too old. I think their traditions are 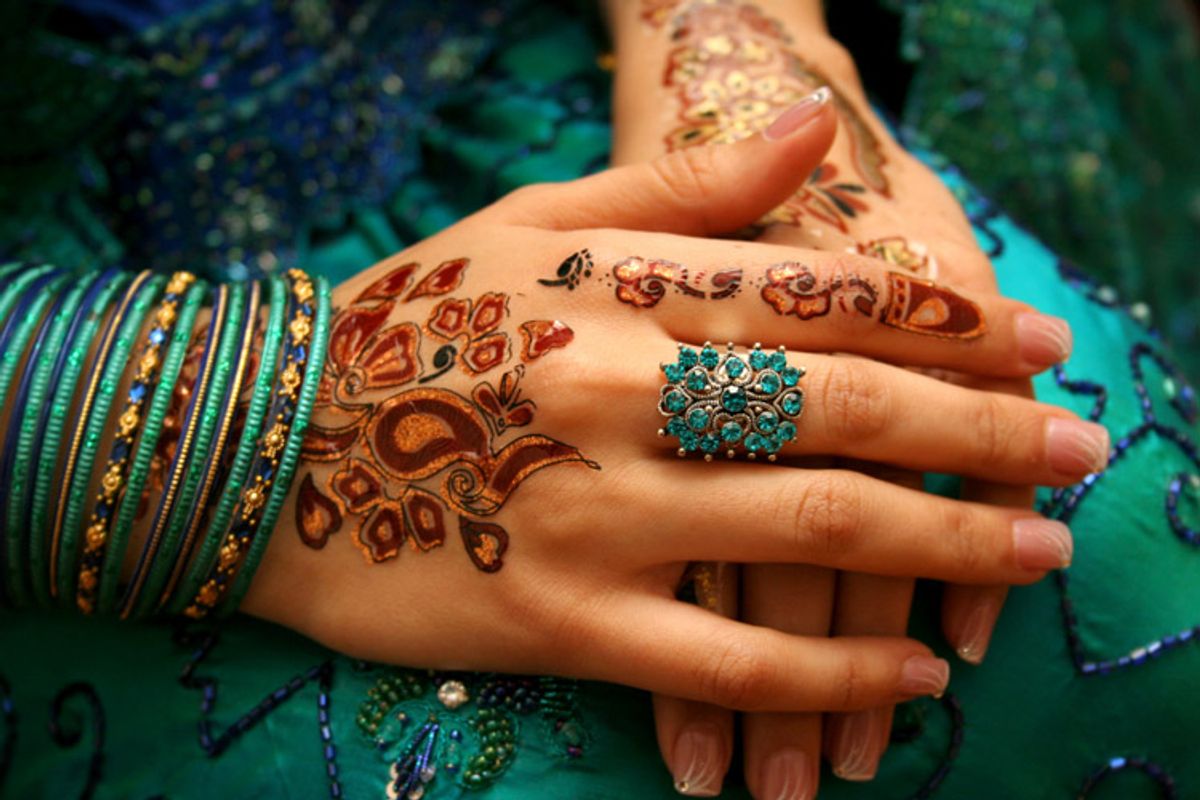 My mother, roti roller in one hand and cordless phone in the other, barged into my room and ordered me to talk to her sister in South India. I already knew what this was about: My aunt had enlisted a professional matchmaker to find me a groom.

Ever since my last relationship ended a year ago, my folks have been trying to marry me off. In their minds, I'm running out of time. Since I live at home at 30 (not uncommon for unmarried Indian women, especially in this shaky economy), they try to introduce me to a different guy every other week. Had I gotten married to either man I dated seriously in the past five years, I would have ended up separated by now. But, according to my folks, I would have been happily married with children already if I'd listened to them. Somehow, they never mention the rise in divorces among Indian Americans.

"It is still not too late, this software engineer in California seems like a good boy," whispered my mom as she handed me the phone. Reluctantly, I chitchatted with my aunt about the weather, Bollywood movies and my latest articles. Slowly, my relative, a pretty mother of two with the beauty and grace to match Padma Lakshmi, steered the conversation to the subject of the match she'd found for me.

"His family already liked your picture and is eager about this alliance. The best part is that your horoscope charts are a good match too," she told me.

"He's the same sign as my husband, and you know that means he'll be a good man," she continued (she knows how much I look up to her spouse). And I do admire my uncle, for the way he won my aunt's love after my grandfather set them up. To this day, he treats her like a goddess and takes good care of his in-laws.

I haven't exactly been savvy with my romantic choices in the past. My first love was half Indian/half white. After we dated for two years he said he always envisioned marrying a non-Indian woman. The second time I fell in love, the guy, albeit from a "good" Indian family, turned out to be a sociopath who hid his other girlfriends from me throughout our yearlong courtship.

I still feel the loss of it. I tell my aunt, "I am not ready to get involved." She pleaded with me to put the past behind me and move on.

"I can't wait to hand your ex's family a fancy wedding card to show how well you've done!" she prematurely gloated. While I appreciated the thought (even though I'd never invite them to my wedding), the idea of getting engaged to a man I'd never met was a bit much. My mom didn't help by making a snarky remark about my propensity to chat up strangers in bars.

I pointed out that, under those circumstances, at least I got to choose whom to converse with. And I only talk to them, not agree to marry them. Then I cuddled with my cat to calm myself and told my aunt that I'd think about this man.

That same day, another relative, who sees me as a daughter, sent me an e-mail: "We think this new boy is right for you, please go visit him in Sacramento."

I couldn't tell if he was kidding. I hadn't seen a picture of this supposedly handsome fellow my whole family approves of, or even viewed his "bio data" -- basically a C.V. for potential spouses -- that was sent to my father. And yet, I was supposed to fly across the country to meet him. Of course, I was assured by everyone, I was under no obligation to agree to marriage. But, they emphasized in turn, this man -- who has never even heard my voice -- is willing to move to the East Coast for me.

I know I haven't done well for myself in the dating game, but who's to say my folks know any better? They claim that reviewing their families first yields a better pool of men, and that their experience makes them wiser.

It's comforting to know my loving clan is looking out for me, but they don't seem to understand what I want. Every time they propose a guy to me, they start with the same line: "He comes from a good family, has a great job (i.e., he makes good money), and his skills are in demand in this country (read: recession proof)." As though that's going to convince me to put on a sari and ask them to start planning the engagement party. If they told me, "this animal-loving guy volunteers at soup kitchens, is passionate about his job, and can't wait to go hiking in Peru," I would have gotten that cross-country plane ticket.

And when, out of respect for my elders, I do contact one of these chosen men, I get rejected because I'm not a doctor, an engineer, or incredibly wealthy. Then, there are some who ask their parents to find them brides but who actually have girlfriends on the side. Others expect me to be a docile housewife who will cook, clean and cater to their needs as they pursue their own careers. And the ones who do want to get hitched as soon as possible are either under parental pressure of their own or looking for a green card. I may be 30, but I'm not going to settle.

People often recommend that you enlist the help of family, friends, co-workers, even mentors, when trying to find a match. I agree that looking for love doesn't have to be a lonely endeavor, and getting set up by those who know me well enough to have a better screening process could certainly help.

I've seen some of my friends who had arranged marriages get along well, and some of those who had love marriages don't stay together, and vice versa. There is a belief among Indians that marriages are made in heaven. If that's the case, I suppose it doesn't matter if my folks find me the guy before I do. My main requirement is this: He better have more to show than a bio data with his academic degrees and his high-paying job.