With $9B in sales projected for 2011, will we all be jittery forever? Maybe not, if they all taste like this 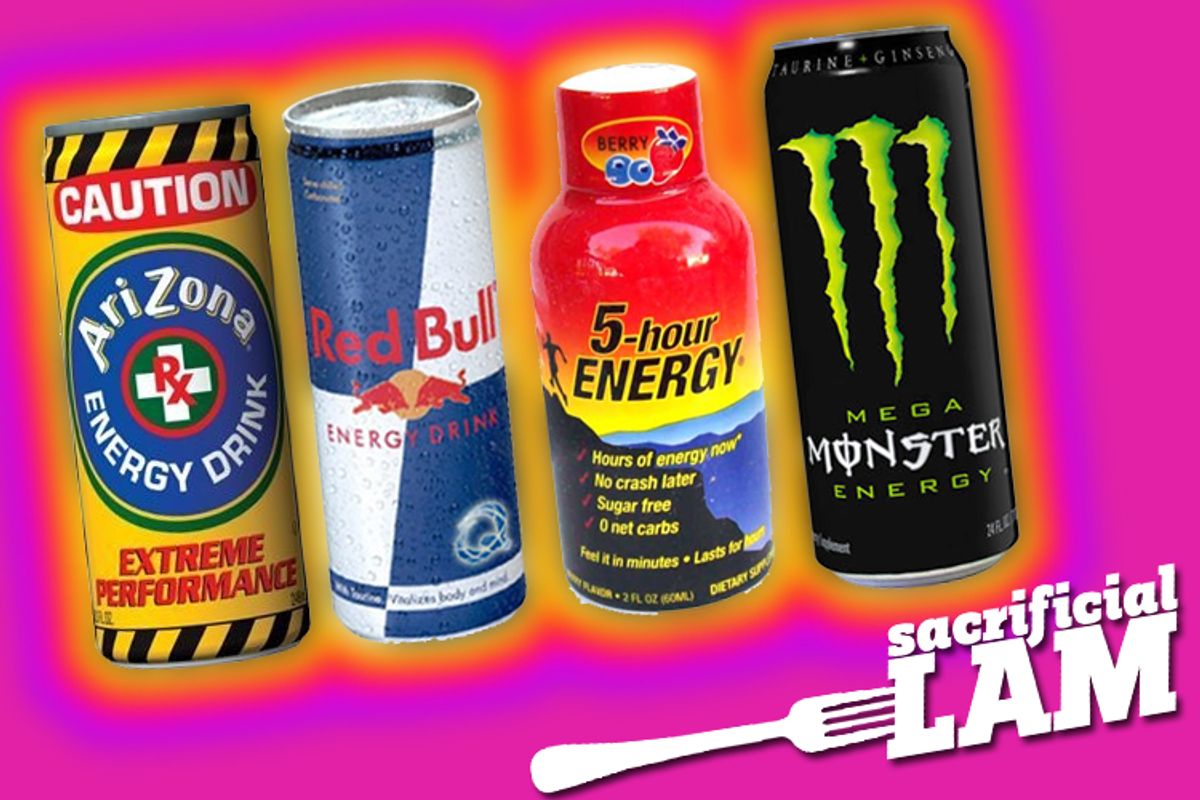 Roughly 10 years ago, in armchair zoologist mode, I spied a new nocturnal species walking the streets of New York: the Red Bull drinker (Taurusruber doucheus). The males of the species were strongly built, with bulging chests and stiff hair. The females were apparently impervious to cold, and required little covering even in February. They roamed in packs, making screeching noises to frighten away predators and attract mates, and seemed to need only cans of Red Bull for sustenance.

I actually remember being handed a Red Bull at a party around then, taking a sip, and giving it back, thinking that I wanted to go out to have a good time, not to be punished. But apparently I wasn't on to something, because sales of energy drinks busted wide open, exploding 900 percent since then, to over $9 billion projected for 2011, even as doctors fret about what the hell is actually in this stuff.

(Here's a discouraging sign: "Because the beverages are classified as nutritional supplements, they have received much less scrutiny and are under fewer restrictions than both foods and drugs." Gee, yay!)

So while the health effects of all that taurine, caffeine, L-caritine (what?) and whatever else are being debated by people way smarter than me, there is one question I feel qualified to answer: How does this stuff taste? I grabbed an armful of cans to find out. (Over the course of five days. I'm not actually suicidal, you know.)

So ... this is why the pouty frown is the favorite face of party girls. You want to know how this tastes? Imagine you're at a party, and someone hands you a vodka and soda with a fistful of lemon wedges. You're already drunk, so by accident you spit your bubble gum into it, and you put it down on the stove. Only someone else really drunk left one of the burners on by mistake, so your plastic cup and vodka and soda and lemons and bubble gum all melt together. Red Bull is what it would be like if you volunteered to clean up that mess with your tongue.

But once you force it down, the effect really is ... noticeable. Just a few minutes after downing the thing, I have to say this: you know all these super-indulged kids on the sidewalk / subway / shopping mall? With their hyper-permissive mothers and their incessant sugar-buzz screeching? I can understand what they're saying. One, right now, is going, over and over, "Someone tore apart the human brain someonetoreapartthehumanbrainsomeonetoreapartthehumanbrain!" And I don't even want to kill him. In fact, I think I am him. Now pardon me while I start stepping on some stranger's lap and reach for the pretty little handrail.

Ten minutes after that, I grabbed my girlfriend's heavy old bike and ran up the stairs with it. That part was easy. It's just the breathing that's hard, with my chest feeling too small for my heart. You live with the tradeoffs, I guess. They say this stuff only has as much caffeine as a cup of coffee, and I can believe that, if you actually mainline that coffee directly into your bloodstream. (Also, within a half hour, I was also scarfing down a greasy pile of onion rings, total drunk-style, so maybe this stuff is a party in a can.)

It smells exactly - and I mean exactly - like children's cold medicine my mom would give me, which you'd assume would make me want to gag, but for some reason I feel like this is strangely ... reassuring. And I need the reassurance, too, because I just read the supplement facts label, and this little two-ounce bottle contains as much caffeine as a 12-ounce coffee, 200 percent RDA of niacin, 2000 percent of vitamin B6, and 8333 percent of vitamin B12. That wasn't a typo. 8333 percent of the recommended daily allowance. What the hell is that much vitamin B12 going to do to me? I'm scared!

... and, it turns out this feels fine. There's a little bit of the "niacin flush," where your face and skin get warm and red for a few minutes after you take niacin. Ostensibly, the dilation of blood vessels niacin causes will "detox" you, but I'm pretty convinced all the energy drinks put the stuff in there so you'll feel the flush and think that something's working. But other than that, I feel slightly caffeinated and alert, and otherwise like normal. It's pleasant, but kind of unremarkable. A nice complement from a good-looking stranger would probably do the same trick.

I can't help but think, looking at this black can with neon green claw marks spelling out an M, for "MONSTER Energy," that this, truly, is the drink made for people who decorate their cars with stickers of a cartoon Calvin peeing on things.

Here is some text from the can:

* These statements have not been evaluated by the Food and Drug Administration. This product is not intended to diagnose, treat, cure, or prevent any disease.

So I take a swig, knowing that the FDA can't vouch for MONSTER Energy's flavor, and: OMG. It is HORRIBLE. It has that bubblegum, generic soda flavor, but like, cranked up to 13 and shrieking with sour. It's so awful. It is so awful. It tastes like a monster trying to crawl down my throat to have its young in my belly. If you made prisoners drink this it would be a war crime. Sorry, folks, you're not going to get a report on how big a hole I punched into the door with my superhuman Wolverine strength, because the rest of this drink is going in the toilet immediately. Ugh.

The version of MONSTER Energy that actually contains fruit juice (50 percent!) is called "KHAOS," so it's probably a naïve hope to think it might be a little more subdued in its assault on my sense of taste than its brother. But I take a sip anyway and ... hey, what do you know, hope springs eternal! It is much more calm, like being softly beaten about the face and head with a sack of sugar, instead of being sandblasted with it. It still has that weird bubblegum flavor, but add to that notes of orange juice and tin can. Delicioso, no? To the sink with you!

I remember, back in the early 90s when AriZona's "sun-brewed style" iced tea, all dolled up in vaguely Native American designs, was all the canned tea rage. Seriously, you couldn't not see it, and its somewhat more subtle flavor than the other teeth-grinding canned ice teas seemed at the time like a small form of salvation. Those AriZonans were showing their shamanistic wisdom!

But then I was in a car, on the way to the mall in Short Hills, New Jersey, when my friend pointed at a house and said, "That's where the family that owns AriZona ice tea lives." No, the drink had nothing to do with the Tea Party's favorite state. (Although now that I think about it, I can't believe they haven't hit on that marketing campaign.) The stuff is made in New Jersey. So they've been selling snake oil for a long time.

By now, I'm pretty frightened of these drinks, but I go for it. And this tastes ... not terribly bad, really. Kind of like orangeade you used to get in school cafeterias, kind of like the brown water they call their iced tea. A little bitter in the end, but the orange flavor really starts to come through. The ingredients actually list "orange blossom honey," and the flavor is almost … tasteful. Or, as tasteful as a drink that comes in a can that looks like a stick of radioactive dynamite with the label CAUTION EXTREME PERFORMANCE can be. Hey, I think I just tasted some mango!

30 minutes after drinking this thing, my heart isn't beating faster so much as it feels like it's beating harder. I have to say that writing is feeling very easy right now – my fingers clacking along nearly as fast as I can think of the words. That's not to say, though, that the words make a whole hell of a lot of sense. I'll have to leave this until I come down to read it over and make sure it's in English. But if you're looking to feel like your brain is maybe trying to push out of your skull and your heart is four times beefier and you like the taste of oranges, you could do worse than this oh my God I think I just broke through and now I can't stop typing holy hell what is happening someone call someone and put me in a I don't know what but just something and get me to shut the hell up SOMEONETOREAPARTTHEHUMANBRAIN SOMEONETOREAPARTTHEHUMANBRAIN