The craziest fad diet in years

Injecting pregnancy hormones and eating 500 calories a day? An expert on hCG therapy -- and our quick-fix culture 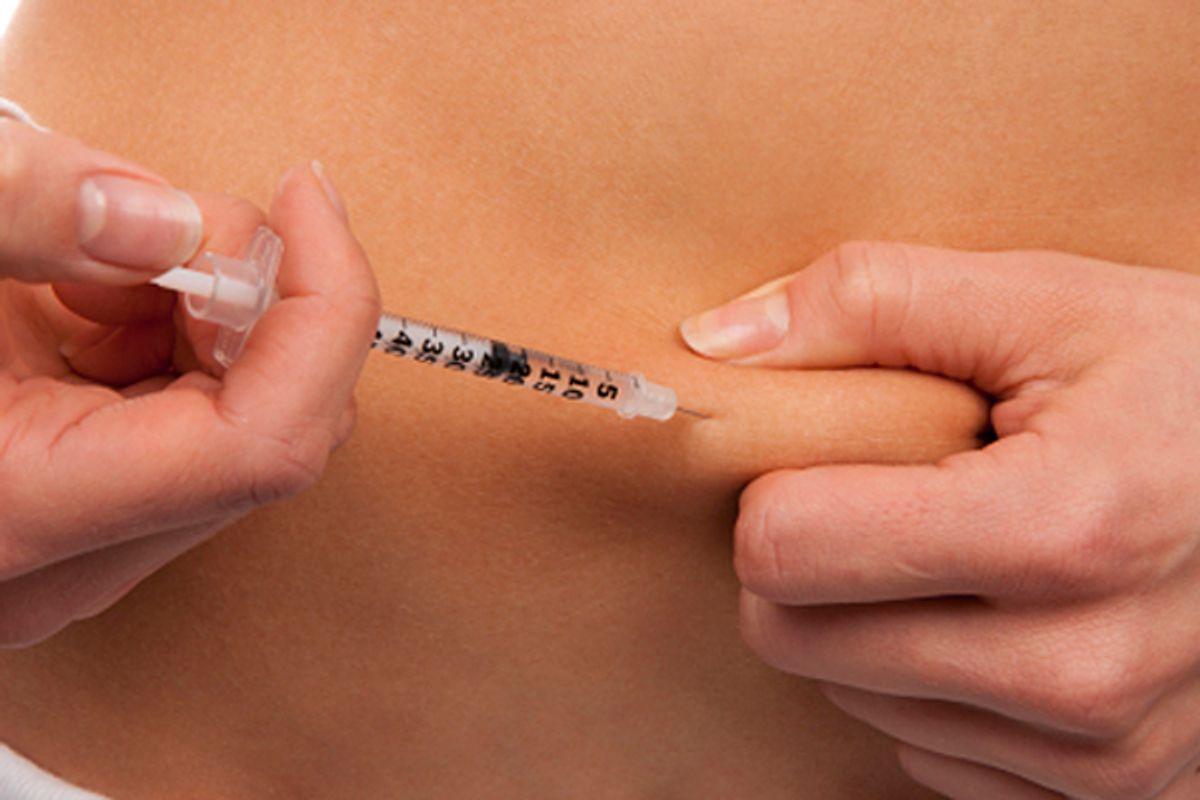 $800 and a syringe sounds like the ingredients for an old "Law & Order" episode. Today, however, the pair have cleaned up and returned to the doctor's office where they serve as America's boutique answer to widening waistlines.

Featured recently in Time and the New York Times, hCG therapy promises dramatic and swift weight loss. In theory, daily shots of the hCG pregnancy hormone allow a dieter to maintain a starvation diet of 500 calories without feeling hunger pangs. On paper, it is easy to be skeptical. More difficult, however, is discounting the success stories of women like Mary Jo, a New Jersey native who appeared on "The Dr. Oz Show" in February.

"This diet is amazing," she told the audience, her voice cracking as she held back tears that were both exhausted and elated. "I tried every national known diet. Five months on one, I lost one pound. I found Dr. Emma and in about a six-week period, I dropped just short of 30 pounds."

Like Atkins and other fad diets before it, hCG therapy plays into two powerful American narratives: the fantasy of losing weight painlessly, and the desire for relentless self-improvement.

So could it possibly work? To find out, Salon contacted Susan Yager, author of "The Hundred Year Diet: America's Voracious Appetite for Losing Weight" and adjunct faculty member at New York University's Department of Nutrition, Food Studies and Public Health. Yager offered some much-needed perspective on our fascination with hCG, fad diets and the truth about healthy eating.

Could you explain the hCG program and how it's supposed to work?

It is one of the loopiest and most dangerous ideas ever. It goes beyond most fad diets. Doctors are prescribing it for weight loss even though there is absolutely no evidence-based proof that it works.

HCG came about in the 1950s. It's a pregnancy hormone that comes from the urine of pregnant women. Essentially what we're seeing today is a repeat of what Dr. A.T.W. Simeons said in the '50s: that if you were injected with the hCG and followed a diet of 500 calories a day at the same time, you would lose weight and would not feel that you were, in fact, on a starvation diet. Not only would you lose weight -- but you would lose it from where you wanted to lose it. So if you wanted to lose it from your hips, you'd lose it from your hips.

There are a lot of negative things associated with it that we should touch on -- risk of blood clots, headaches, depression and, of course, the feeling of swollen tenderness in the breasts because the body thinks you're pregnant.

Certainly, it's not a very good idea. It's not a sustainable idea for losing weight. I would also add that there has been no study of the long-term ramifications. It may not have a bad effect now. It might in five or 10 years.

You've studied America's fascination with weight loss. Are silver-bullet programs like this anything new?

Generally, there are only three macronutients: carbohydrates, fat and protein. For a fad diet to be successful, it has to make people believe in the irrational. The truth is that fewer calories result in weight loss. That is unfortunately the only answer there is. But people don't want to hear that.

At the same time that hCG was popular in the 1970s, there was a thing called staple puncture that was also very popular. The theory was that obesity nerve endings are in the ear. People would go to these clinics and have these clips put in their ear. You also could eat only 400 calories a day. Now, give me a break.

Would you say that the silver bullet diets are a myth?

Absolutely, they're a myth. Every once in a while a substance like Ephedra, something that actually speeds the metabolism and speeds the heart rate, comes along. Hydroxycut was another one. These go on the market and stay there until someone dies. They work in speeding metabolism and they work in speeding heart rate if you are willing to risk death. What amazes me about these diets is that so many people are willing to do this. People are willing to inject themselves with the urine of pregnant women and eat only 500 calories a day in hopes that that is going to work.

Is there something uniquely American about the attraction to the quick fix?

I think it is. I explored that a bit in "The Hundred Year Diet," looking at our long history of fads. The first fads were mainly for reasons of lust control. [Early American diet reformers] like Sylvester Graham and John Harvey Kellogg believed people would be better citizens and generally lead better lives if they restricted things from their diet.

We also have such a love with science and technology in America. We just love stuff like that. Someone says, "Oh, you just take this injection every day and you eat these foods and fat is going to come off of special parts of your body." We are willing to embrace that a lot more than other cultures. It's why Jenny Craig is wildly successful in America, and it's not doing very well in France. The French are saying, "What, you want us to eat a cardboard box? I don't think so." I think we are more willing to accept those things. Which is ironic when you consider that we are also the heaviest nation in the developed world.

When did the American obsession with being thin begin?

At the turn of the 20th century, it was still OK to be pleasingly plump. William Taft, who was president from 1909 to 1913, weighted 300 pounds. Lillian Russell was a big star and heavy.

World War I was a turning point, because it was the first time that we learned how to pack a lot of calories into containers and get it to the troops overseas. To do that, people had to be convinced not to eat meat and wheat and fat and sugar. America was kind of put on a diet in 1917, and it's no surprise that in 1918, the first best-selling diet book, "Diet and Health," written by physician Lulu Hunt Peters, was released. People suddenly learned how to count calories, and never stopped.

Can you talk about the influence of daytime TV in this conversation? What role do shows and commercials play in America's interest in losing weight?

When I think of someone like Oprah, I shake my head. Here is this woman, one of the wealthiest and most influential women in the world. She has the ability to get the best doctors and nutritionists. She is constantly yo-yoing. She is constantly embracing various fad diets. I think Mehmet Oz tries to give out good information. It tends to be a little too extreme for most people. I mean, he's a vegetarian, and advocates very small portions of food many times a day. It's difficult, but I think his information is good. One of the big problems is that apathy can set in. People go on one fad diet after another, and of course they don't work because you're set up to fail. Eventually, people just throw their hands up. Just say, "That's it. I don't care anymore. Life is too short. I'm going to eat what I want." It's a terrible sense of failure.

As far as commercials, children are bombarded with them. I have the statistic in front of me. The average child sees 7,600 images of fast food restaurant offerings and candy commercials a year.

I looked up hCG on Twitter. I saw a lot of positive chatter about it. What do you think is the influence of social media on this conversation?

A fad is successful if it makes you believe in the irrational. Think about the effect if you have social media saying, "Well, I tried hCG and it worked. It was great. I lost 100 pounds and my husband lost 150 pounds. Don't let anyone tell you that it doesn't work." And people say that over and over again. Sure it's going to help fads progress. A lot of people really like to embrace the counterintuitive. So saying something like, "This is amazing, and the AMA is against it, and the FDA is against it, and that's because they don't want people to lose weight; they want people to be overweight because it keeps them in business." You say that enough and people absolutely believe it. It's amazing what, on all levels of society, some people can be led to believe it.

So what do people need to know about eating healthy?

There really hasn't been anything new since it was determined that if you take in fewer calories than you need, you'll lose, and if you take in more calories that you need, you'll gain. That's the basic law of thermodynamics. What I would say is, any time those words "new" and "revolutionary" appear, that is a red flag. Any time something seems too good to be true, it is.