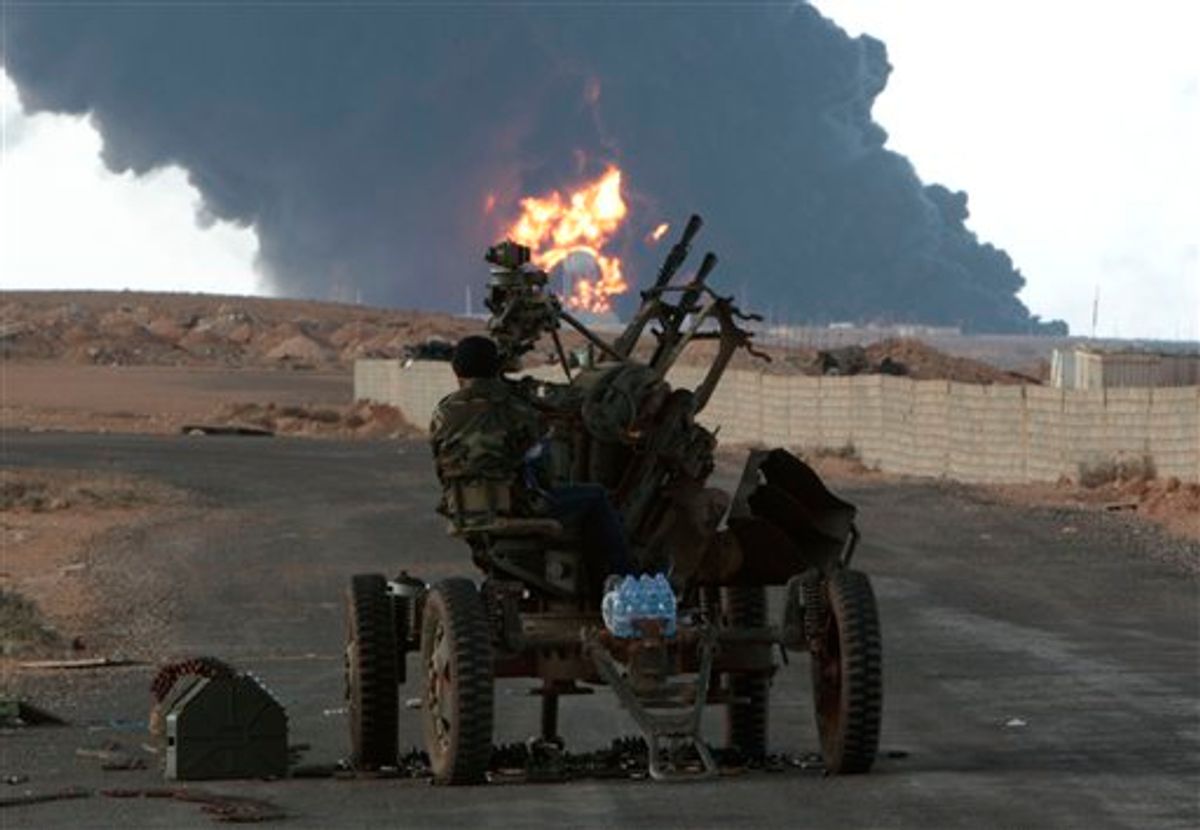 Anti-Libyan Leader Moammar Gadhafi rebel, mans an anti-aircraft machine gun, as a pall of smoke and flames rises from a fuel storage depot that was attacked during fighting against pro-Moammar Gadhafi fighters, in Sedra, eastern Libya, on Wednesday March 9, 2011. Gadhafi appears to be keeping up the momentum he has seized in recent days in his fight against rebels trying to move on the capital, Tripoli, from territory they hold in eastern Libya. (AP Photo/Hussein Malla) (AP)
--

In the west, Gadhafi claimed victory in recapturing Zawiya, the city closest to the capital that had fallen into opposition hands. The claim could not immediately be verified; phone lines there have not been working during a deadly, six-day siege.

The fall of Zawiya to anti-Gadhafi residents early on in the uprising that began Feb. 15 illustrated the initial, blazing progress of the opposition. But Gadhafi has seized the momentum, battering the rebels with airstrikes and artillery fire and repulsing their westward march toward the capital, Tripoli.

Gadhafi's successes have left Western powers struggling to come up with a plan to support the rebels without becoming ensnared in the complex and fast-moving conflict. On Wednesday, a high-ranking member of the Libyan military flew to Cairo with a message for Egyptian army officials from Gadhafi, but no further details were known.

President Barack Obama's national security team weighed how to force Gadhafi from power and halt his crackdown on rebels, but the White House said no action was imminent and set no timeline as attention shifted to a pivotal NATO session in Brussels.

The NATO alliance said it was planning for any eventuality in the Libyan crisis. But with Defense Secretary Robert Gates preparing to join a meeting of alliance defense chiefs to discuss military options on Thursday, there was little sign they would agree to set up a no-fly zone over the North African country.

A rebel spokesman said Wednesday they will buy weapons if the international community fails to declare a no-fly zone.

"If a no-fly zone is not imposed, we do have the means to get armaments. We don't expect any country to refuse to deal with us in terms of an arms sale," said Abdel-Hafidh Ghoga, a spokesman for the rebels' provisional transitional national council.

He did not elaborate or say where the rebels would get the money for arms.

Britain and France are pushing for the U.N. to create a no-fly zone over the country, and while the U.S. may be persuaded to sign on, such a move is unlikely to win the backing of veto-wielding Security Council members Russia and China, which traditionally object to such steps as infringements on national sovereignty.

Gadhafi said in a Turkish television interview that Libyans would fight back if Western nations imposed a no-fly zone to prevent his regime from using its air force to bomb government opponents staging a rebellion.

He said imposing the restrictions would prove the West's real intention was to seize his country's oil wealth.

In eastern Libya, an Associated Press reporter at Ras Lanouf near the front line of fighting saw an explosion from the area of the Sidr oil facility, 360 miles (580 kilometers) east of Tripoli.

Three columns of thick smoke rose from the area, apparently from burning oil.

Mustafa Gheriani, an opposition spokesman, said the government artillery hit a pipeline supplying Sidr from oil fields in the desert. An oil storage depot also was hit, apparently by an airstrike, he said.

Gheriani accused Gadhafi forces of intentionally targeting oil facilities as a warning to Europe that the chaos in Libya will hurt oil supplies.

"Gadhafi thinks he can put pressure on Europe, but I think this is just going to work against him," Gheriani told the AP.

Shukri Ghanem, chairman of the Libya's National Oil Corp., said the Sidr explosion was from "a small tank for diesel" that caught fire and he insisted it would not affect oil production.

Ras Lanouf is the westernmost point seized by rebels moving along the country's main highway on the Mediterranean coast. Four bodies were brought to the morgue at the hospital in Ras Lanouf, doctors said.

In Cairo, an Egyptian army official told the AP on condition of anonymity that Maj. Gen. Abdul-Rahman bin Ali al-Said al-Zawi, the head of Libya's logistics and supply authority, was asking to meet Egypt's military rulers.

The violence in Libya has taken a toll on the country's oil production. For the past week, government forces and rebels have been battling around several key oil ports east -- Brega, Ras Lanouf and Sidr. At their peak, those three export terminals handled about 715,000 barrels of crude per day, or roughly 45 percent of the country's exports, according to figures published in industry publication Africa Energy. A fourth eastern port, Marsa al-Harigah, handled another 220,000 barrels per day.

In total, those four ports would then account for almost 60 percent of the country's crude exports.

"We were already seeing Libya as pretty much being closed," said Samuel Cizsuk, Mideast oil analyst with IHS Global Insight in London. "It was only a question of time before the escalating violence would damage oil facilities."

"Libya has been discounted from the global markets," he said.

Michael reported from Tripoli. Ryan Lucas in Benghazi, Libya, Bradley Klapper and Matthew Lee in Washington, Derek Gatopoulos in Athens and Tarek El-Tablawy in Cairo contributed to this report.