Why Mitt Romney is still the favorite

How on earth could the man who imposed "ObamaCare" on Massachusetts win the GOP nomination? Well ... 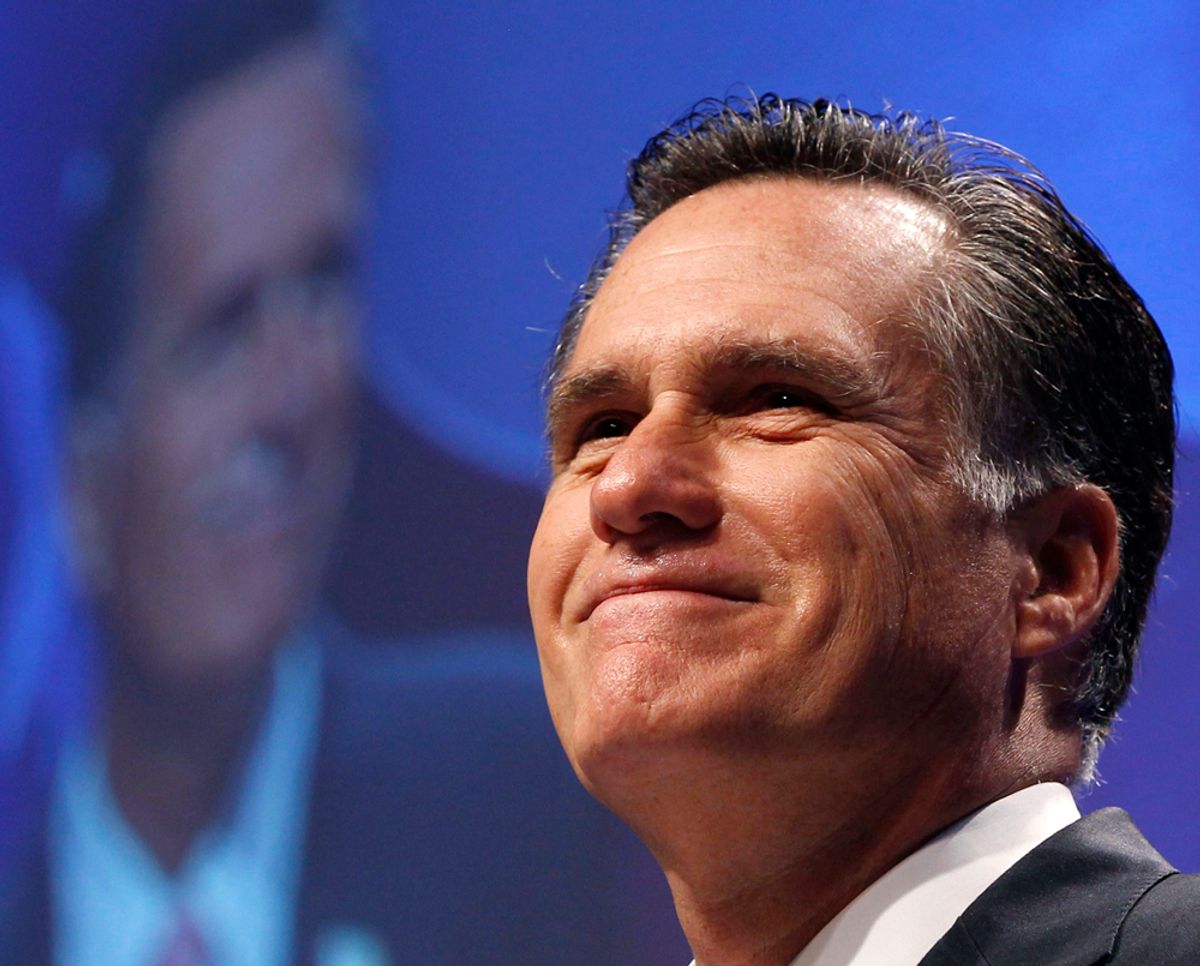 It is tempting -- very, very tempting -- to write off Willard "Mitt" Romney as a serious contender for next year's Republican presidential nomination. And, in fact, several knowledgeable observers already have.

Romney, in case you haven't heard, embraced a healthcare reform law in Massachusetts five years ago that ended up being the model for the national program that President Obama pushed through Congress without a single Republican vote last year. He's also dogged by the impression that he's an unusually spineless opportunist (the result of the extraordinary pains he took to win over socially liberal voters in Massachusetts before rebranding himself as right-wing culture warrior) who doesn't actually believe ... anything. And, of course, there's the matter of his Mormonism and the concerns it raises among some of the Christian conservatives who are so important in the GOP's nominating process.

Thus, even though the rest of the GOP field isn't (at this point) particularly strong or deep, Romney -- despite being crowned the front-runner as soon as the 2008 campaign ended -- is lucky if he breaks 20 percent in polls of national Republicans. The most recent Gallup poll, released earlier this week, has him at 16 percent -- in a virtual tie with Mike Huckabee and Sarah Palin.

And yet, despite all of this, I'd still bet that GOP's standard-bearer next year will end up being Mitt Romney. Why? Even though he disagrees with my conclusion, the New Republic's Jonathan Chait offers a useful guide to analyzing the emerging Republican field:

My view of the primary selection system is that it consists of two basic constituencies, the elites and the base. The elites want to find a candidate who is electable and committed to their policy agenda. The elites are the prime driver of the process; they can communicate, via organs like Fox News and The Weekly Standard, which candidates may be undeserving of serious consideration despite their emotional appeal to base voters. That’s how the elites have disqualified insurgent candidates like Pat Buchanan (too right-wing) and John McCain (too left-wing); they are now doing the same to Sarah Palin (too unelectable).

But elites don’t always control the process. Sometimes they can get together and virtually determine the winner in advance (i.e., George W. Bush in 1999-2000), but, often, they can’t pick candidates without the assent of the base, which is capable of winnowing out elite-approved candidates. Think John Connally, Phil Gramm, or others for examples of candidates who made it through the elite primary but were nixed by the voters.

So, if you want to find the next Republican nominee, you need to find a candidate who’s acceptable to both elites and the base

Applying this logic, Chait concludes that Palin, Huckabee, Newt Gingrich and Haley Barbour would be disqualified immediately by the elites, with the base rejecting Jon Huntsman for his service in the Obama administration, Mitch Daniels for downplaying social issues, and Romney for his healthcare plan. Which would leave Pawlenty, who doesn't have any obvious flaws that would prompt the elites or the base to dismiss him off the bat.

Most of this makes sense. Certainly, as I've written, the GOP elites won't allow a Palin nomination -- they've already taken great strides toward extinguishing her hopes. And given his racial baggage, I agree that they'll resist Barbour, too. And since Huntsman and Daniels (if he even runs, which he probably won't) don't start off with big, built-in bases, I also agree that their apostasies are probably disqualifying. I'm inclined to disagree on Mike Huckabee, but it probably doesn't matter: It's doubtful that he'll run. So I can get it down to Romney and Pawlenty, too. But, for all of his woes, my sense is that Romney has more going for him than we realize.

When you look back at other competitive nominating contests in the modern era, the reality is that the GOP tends to nominate candidates who began the campaign with potentially severe problems with the base. John McCain, who was championing a Ted Kennedy-backed immigration reform plan when the '08 process began (and immigration was hardly his only problem), is the extreme example.  Bob Dole, once dubbed "the tax collector for the welfare state" by Newt Gingrich, was hardly a perfect fit for the rabidly anti-government Republican Party of 1996. Nor was George H.W. Bush the ideal option for conservatives in 1988, even if he was Ronald Reagan's vice president. After all, he owed the vice presidency to a compromise after the 1980 primaries, in which he'd run to Reagan's left as a pro-choice opponent of trickle-down (or, as Bush put it, "voodoo") economics. Bush had been nothing but loyal to Reagan as V.P. (and had dutifully switched his positions on abortion, tax cuts and other issues), but the "New Right" hardly trusted him -- and Reagan himself actually stayed neutral in the GOP primaries.

All three of these apostates survived, even though there were elite-approved alternatives challenging them. Part of this was luck: A panicked GOP rushed to Dole's side when he lost New Hampshire to Pat Buchanan in 1996; but had Lamar Alexander finished in second place instead of Dole, all of that support might have gone to him instead -- with Dole wiped out. Similarly, McCain benefited from the inability of either Romney or Huckabee to corner the market on cultural conservatives, allowing McCain to win South Carolina and hold his own on the South on Super Tuesday (while winning the big non-Southern states with ease). But the examples of 1988, 1996 and 2008 also demonstrate that simply being an elite-approved candidate with potential appeal to the GOP base (think Jack Kemp -- aka Reagan's "true" heir -- in 1988) doesn't ensure that you'll break out, even when your opposition has serious problems with the base.

Indeed, there are some troubling early signs for Pawlenty, who is trying as hard -- and probably harder -- than any other Republican candidate. It's not that he's polling so poorly in national and early state polls; it's early and no one knows who he is yet -- that will happen. But even with audiences among whom Pawlenty is known and has had a chance to make an impression, the reviews and the results haven't been impressive. Consider last month's CPAC straw poll, which Pawlenty worked hard. But his speech largely fell flat and he finished in a three-way tie for 6th place with 4 percent -- behind even Chris Christie, who stayed as far away from CPAC as possible and who has repeatedly insisted he won't run. Pawlenty may yet catch fire with activists and opinion leaders in the GOP -- although I have trouble seeing how -- but simply being the only elite-approved candidate not named Mitt Romney is not going to vault him to 30 percent in Iowa.

Meanwhile, Romney, for all his flaws, starts with a significant base of support -- or at least potential support. The elites still see him as an acceptable, maybe even preferable, option for the nomination and plenty of Republican voters are still open to supporting him. If you assume that Huckabee and Palin won't run (or that Palin, if she does, will be marginalized), then Romney still begins this campaign as the closest thing there is to a default choice for Republicans. This doesn't mean that another candidate can't come along and supplant him, but it does give him a chance to fend off anyone who breaks through into the top tier.

Think back to that 1996 example: Buchanan ended up breaking through as Dole's main rival that year -- and (as Chait notes) since Buchanan was totally unacceptable to the elites (and to many non-elites), Dole then won with ease. So while we can dismiss, say, Gingrich now as unacceptable to the party elites, it doesn't mean that Gingrich (or someone like him) won't begin moving up in polls, or even have a surprise showing in an early state. It just means that, if it comes to it, the elites will turn on him hard. If Romney is the default alternative, then I doubt his healthcare baggage -- especially if he's saying all the right things about learning from the Massachusetts example, letting states decide for themselves, and wanting to repeal "ObamaCare" -- will prevent him from securing the nomination just like Dole did.

So, at least for now, my money's on Mitt. I just don't think Pawlenty has the chops to break out from the pack. (And even if he does -- let's see how he holds up under that microscope.) Nor do I see any of the other likely Romney rivals winning, for the reasons Chait describes. Now, if Chris Christie were to change his mind ...