The president's approval ratings are sagging in tandem with growing pain at the pump. Austerity is not the cure 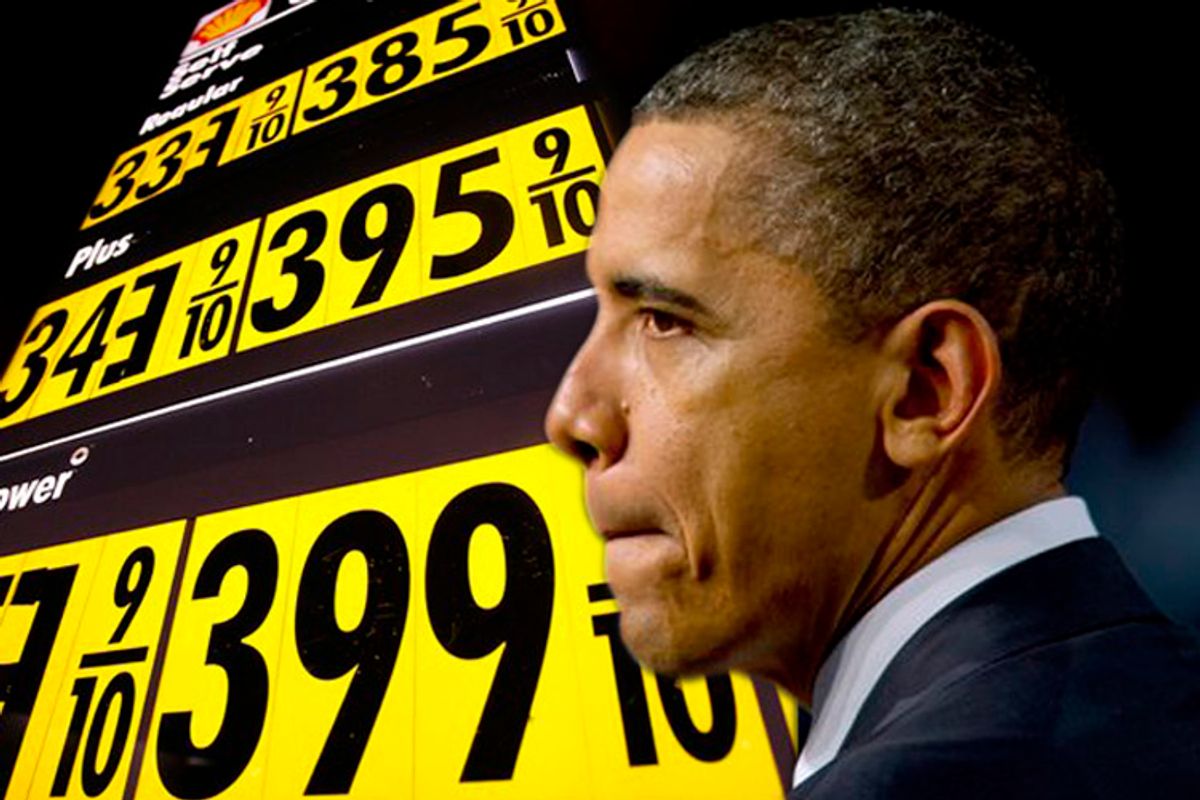 In recent weeks, gas prices have risen sharply enough for people to notice: 39 cents a gallon since mid-February. Whether you want to blame revolution in Libya or a (not unrelated) speculative frenzy by oil traders or remorselessly rising demand in China is up to you. Whatever the cause, there's no getting around the fact that the average price of a gallon of gas hit $3.57 on Monday -- only 54 cents under the peak reached in the summer of 2008.

At the same time, President Obama's poll numbers, after improving or staying steady for months, have suddenly slipped beneath the 50 percent approval level. One pollster quoted by Reuters immediately made the energ correlation:

Ipsos pollster Cliff Young said the rating was a direct result of gasoline prices that have risen sharply in recent weeks amid tumult in North Africa and the Middle East.

"We are moving into a scenario in the near-term that is much more uncertain given the issue of gas prices," he said. "Gas prices specifically are things that affect people's pocketbooks and have an immediate impact."

Real Clear Politics's David Paul Kuhn is already wondering whether gas prices could sink Obama's reelection, while Reason's Ron Bailey reminds us that "10 out of 11 post-World War II recessions in the United States were preceded by a sharp increase in the price of crude petroleum."

Few things focus the American consumer mind more than swiftly rising gas prices. Our culture is built around cheap gas, and many of us don't have readily available alternatives to escape a price hike. It's no surprise, as Kuhn also points out that "last week, the Pew Research Center found that slightly more Americans were following the rising price of oil than the violence in Libya or the Wisconsin labor dispute."

The New York Times' Jad Mouawad and Nick Bunkley try to offer some encouragement by arguing that the last oil spike has left the U.S. "better prepared" for a new surge in gas prices -- we're consuming less oil now than in 2005 and driving higher mileage cars -- but such opitmism has to be balanced out by the overall fragility of the economy. It won't take much to squelch consumer confidence and bring the economy to a screeching halt, once again. Higher gas prices, too deep a whack on government spending, ongoing trouble in Europe... if the turnaround in Obama's post mid-term popularity was correctly correlated with the reviving economy, then the converse will undoubtedly also be true.

So what should the president do? Economist Mark Thoma wonders if a "surprise release" of oil from the Strategic Petroleum Reserve might be useful -- if only to expose to plain view the number of speculators who are betting on a sustained, Libyan-driven oil price increase. That might make sense, if we were sure that the current pressure on oil was coming mainly from Libya, and Saudi Arabia proves unable or unwilling to boost production in the meantime. But such a move would only provide temporary relief -- perhaps it would be best to save our powder until we really need it.

The sad truth is that there is not a whole lot the president can do in the short-term. Loosening restrictions on offshore oil might shave a few cents off the price of a gallon of gas decades from now --but it would be a meaningless gesture for dealing with present-day realities. Higher mileage standards and Department of Energy stimulus funding for electric car battery manufacturing and other transport initiatives are things the White House can take credit for already having accomplished, but the won't help Obama ride out the turbulence that higher gas pump prices are inflicting on Americans today.

There's really only one course of action available -- making sure that the downside risks to the economy that Obama does have control of don't materialize. With each tick upwards at the pump, the importance of making it absolutely clear to Congress that now is not the time for debilitating short term budget cuts becomes more obvious. When headwinds start to blow, it's a bad idea to cycle backwards.