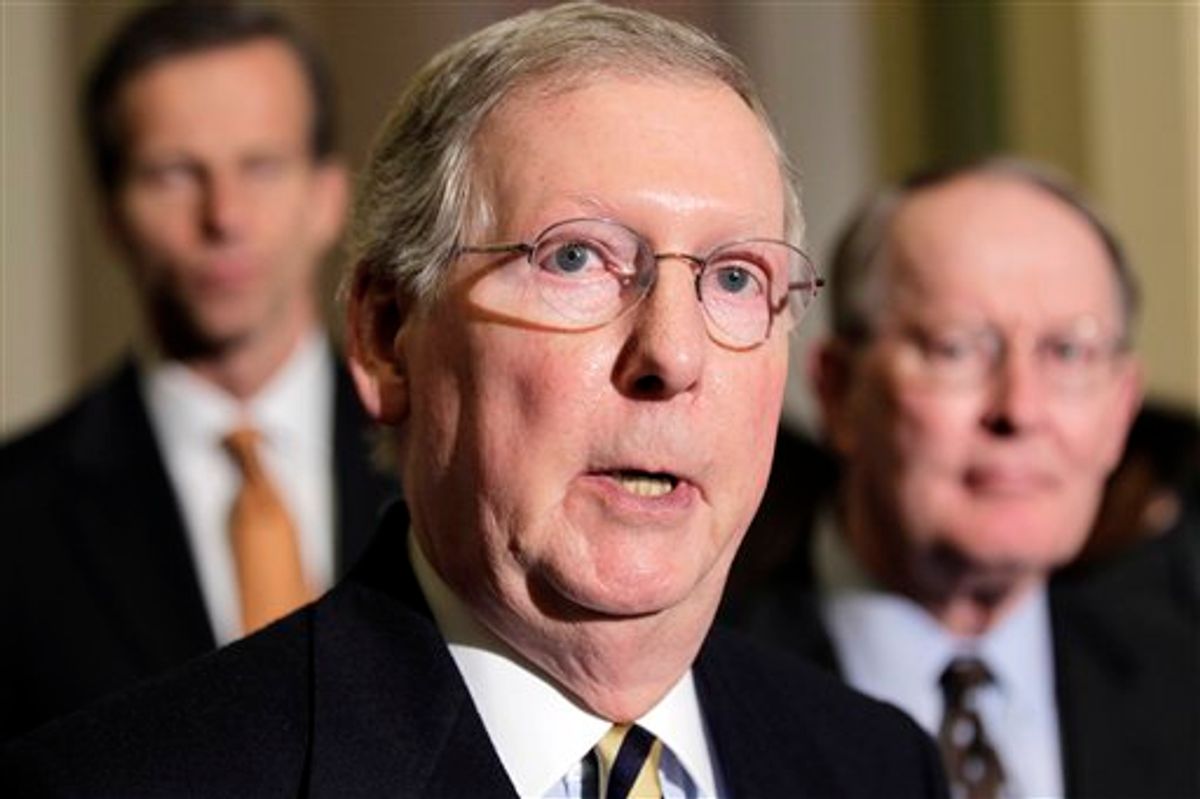 The Democratic-led Senate on Wednesday emphatically rejected a budget-slashing House spending bill as too draconian. It then immediately killed a rival Democratic plan that was derided by moderate Democrats as too timid in its drive to cut day-to-day agency budgets.

The votes to scuttle the competing measures were designed, ironically, to prompt progress. The idea was to show tea party-backed GOP conservatives in the House that they need to pare back their budget-cutting ambitions while at the same time demonstrating to Democratic liberals that they need to budge, too.

"It isn't often that two failed votes in the Senate could be called a breakthrough," Sen. Chuck Schumer, D-N.Y., said in a speech at the liberal Center for American Progress think tank. "Once it is plain that both party's opening bids in this budget debate are non-starters, we can finally get serious about sitting down and narrowing the huge gap that exists between the two sides."

Schumer, along with other top Senate Democrats, visited with Obama on Wednesday afternoon to plot strategy. The senator declined to comment afterward, other than to say he recognizes his party will have to move in the GOP's direction.

One reason is that Democratic moderates are agitating for further cuts to spending.

"I still think there are way too many people in denial around here about the nature of the problem and how serious it is," said Sen. Claire McCaskill, D-Mo., who contended that the Democratic plan didn't go far enough. But she said the GOP measure cut too indiscriminately in its funding for infrastructure programs, education and research.

At issue was legislation to fund the day-to-day operating budgets of every federal agency through the Sept. 30 end of the budget year and provide a $158 billion infusion for military operations in Iraq and Afghanistan.

Republicans dominating the House, driven by a campaign promise to bring return domestic agency budgets to 2008, drove through last month a measure cutting more than $60 billion, imposing cuts of 13 percent, on average, to domestic agencies.

The 87-person freshman class forced Speaker John Boehner, R-Ohio, to back away from an earlier plan cutting $35 billion over the second half of the budget year that took into account the fact that the budget year is nearly half over. As a result, over the coming six months, the House measure would actually impose day-to-day cuts far steeper than promised in the campaign. Targets grew to include Head Start, special education and Pell Grants for low-income college students.

Senate Democrats had been slow to respond. Their alternative, unveiled just last Friday by Appropriations Committee Chairman Daniel Inouye, D-Hawaii, cuts about $12 billion below levels enacted for 2010. It's also $30 billion below a Senate omnibus spending measure that Republicans sidetracked in December.

Inouye said his bill represented months of labor by panel members and their aides and "makes real cuts to real programs."

"But the cuts ... are based on hearings, testimony and a thorough analysis of the current needs of every agency and department," Inouye said. "By contrast, the Republicans in the House have thrown together a proposal ... based on the campaign promise to reduce spending by $100 billion."

Inouye was referring to a GOP campaign promise to cut nonsecurity spending by $100 billion below President Barack Obama's budget request. By that measuring stick, the Democratic alternative represents $50 billion in savings.

"There is plenty of fat to be cut in the discretionary budget," said Sen. Orrin Hatch, R-Utah. "And yet Democrats can't find it in themselves to cut an additional $50 billion from a bill that spends over $1 trillion."

Inouye's current plan might have won bipartisan support last year, but it was overtaken by events. GOP moderates queasy about cuts to education, health research and college aid nonetheless rallied behind the slashing House measure despite their reservations.

"I have a lot of concerns about some of the cuts," said moderate Republican Sen. Susan Collins of Maine. But, she added, "it may be necessary to send a strong message to the White House."

The near-universal GOP support for the House plan belied significant qualms about it among many Republicans.

"While I can support the spirit in which the House made its cuts, I do not endorse each and every reduction in the House measure," said Sen. Thad Cochran, R-Miss., top Republican on the Appropriations panel. "In fact, I oppose some of the cuts to important programs and believe that alternative reductions must be considered."

There were GOP defections from the right, however, as tea party-favorites Rand Paul, R-Ky., Mike Lee, R-Utah, and Jim DeMint, R-S.C., voted against the House GOP measure.

"The cuts are more significant, but they also pale in comparison to the problem," Paul said. "I think both (Democratic and Republican) approaches do not significantly alter or delay the crisis that's coming."