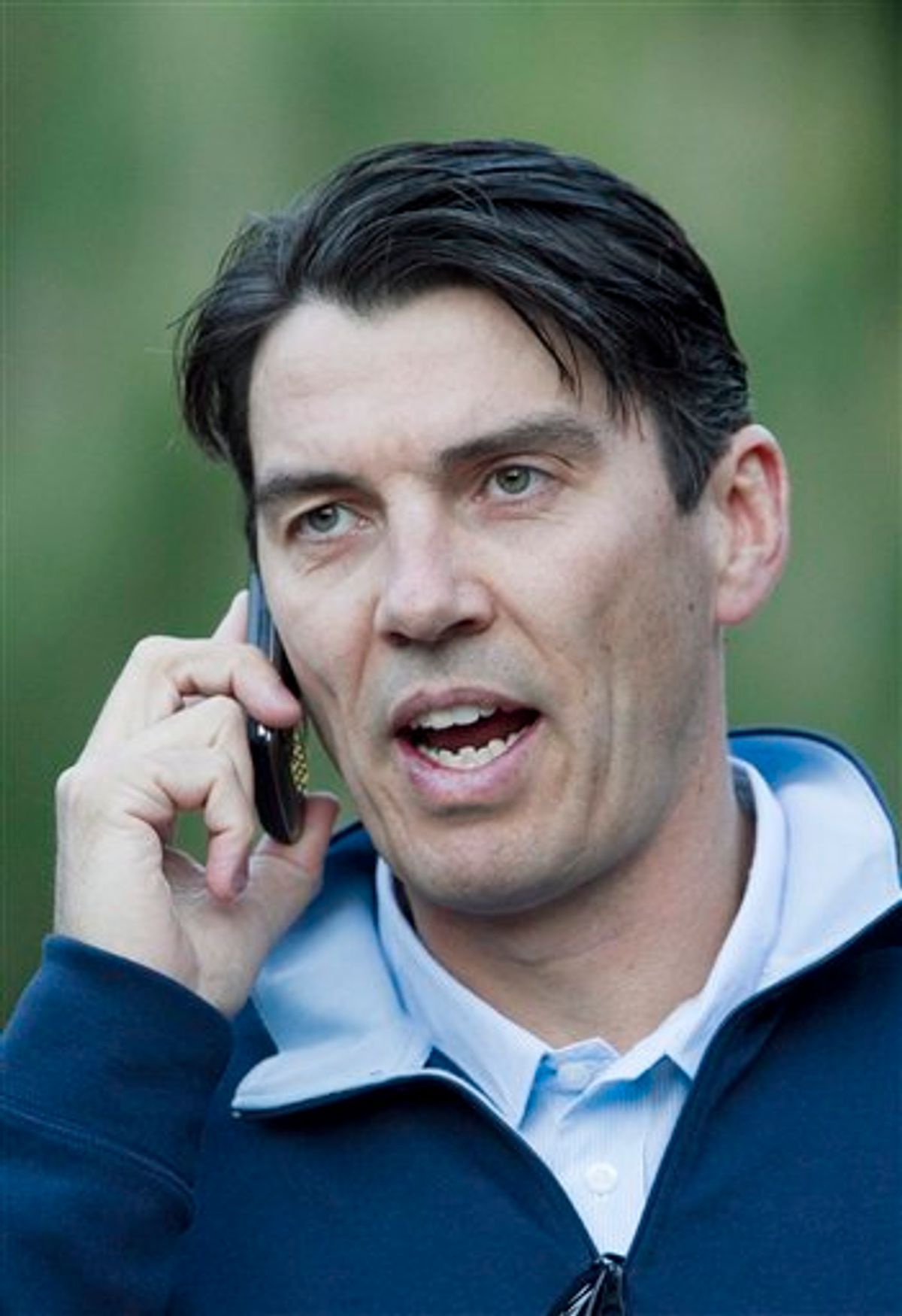 FILE - In this July 8, 2010 file photo, AOL Chairman and CEO Tim Armstrong talks on the phone as he walks to a morning session at the annual Allen & Co. media summit in Sun Valley, Idaho. Online company AOL Inc. is buying online news hub Huffington Post Monday, Feb. 7, 2011, in a $315 million deal that represents a bold bet on the future of online news.(AP Photo/Nati Harnik) (AP)
--

AOL said Thursday it will slash 900 jobs worldwide, or nearly 20 percent of its work force, partly to eliminate overlap that stems from its recent purchase of The Huffington Post.

About 200 of the cuts are from AOL's content and technology departments in the U.S. The remaining 700 are at AOL's offices in India, which mainly provide back-office support to the U.S. But AOL spokesman Graham James said 300 of those will move to other companies, which are taking over support functions.

Thursday's cuts leave AOL with 3,500 employees in the U.S. and about 500 overseas. The total work force is a fifth of what the company had at its peak in 2004, when its staff numbered more than 20,000. The company pared thousands of workers in the years leading up to its separation from Time Warner Inc. in late 2009. After the companies broke up, AOL cut about 2,300 of its then-6,900 employees -- or about a third of its work force -- through layoffs and buyouts.

In the '90s, AOL was the king of dial-up Internet access, known for its ubiquitous CD-ROMs and "You've got mail" greeting in its inboxes. The company even managed to buy Time Warner at the height of the dot-com boom in 2001. But the companies never successfully melded, and as consumers moved to faster Internet services from cable and phone companies, AOL's main source of revenue dwindled.

Over the past several years, AOL has struggled to reinvent itself as a company focused on advertising and content, operating a variety of websites such as the popular tech blog Engadget. Since CEO Tim Armstrong was lured from Google Inc. to take the helm of AOL in April 2009, AOL has focused increasingly on the market for local content, helped by the purchase and expansion of its network of Patch local news sites.

The company has continued to acquire sites, too: Most recently, it paid $315 million for The Huffington Post as part of its efforts to become a go-to source for news and other content. That deal closed Monday.

Armstrong, speaking at a conference in New York, said the company has no immediate plans for further layoffs. But he added, "in our situation we don't have the luxury of long-term planning."

Armstrong said AOL will hire this year and will try to have more full-time journalists in its ranks to rely less on freelancers. He said about half the employees now have content-producing roles, and he wants to increase that to 70 percent.

Armstrong maintained his confidence about AOL's prospects for a comeback.

"AOL will turn around," he said. "No doubt about that."

But AOL's revenue is contributing less and less to the overall online advertising market in the U.S., eMarketer Inc. analyst David Hallerman said.

Although Hallerman said he sees promise in the company's efforts to establish itself as a local content provider, he said the ads that run on these sites bring in less revenue than those on its more popular websites. That means AOL will have to make that up by drawing a lot of traffic.

Clayton Moran, an analyst with The Benchmark Co., said that the changes made since Armstrong took control are sensible and probably the best route the company could take.

But he said the changes "haven't shown a lot of financial progress. It's taking time for the changes to have an impact."

Shares of AOL fell 4 cents to $19.30 in afternoon trading Thursday.