Three BBC reporters say they were captured, beaten and subjected to mock executions by Gadhafi forces 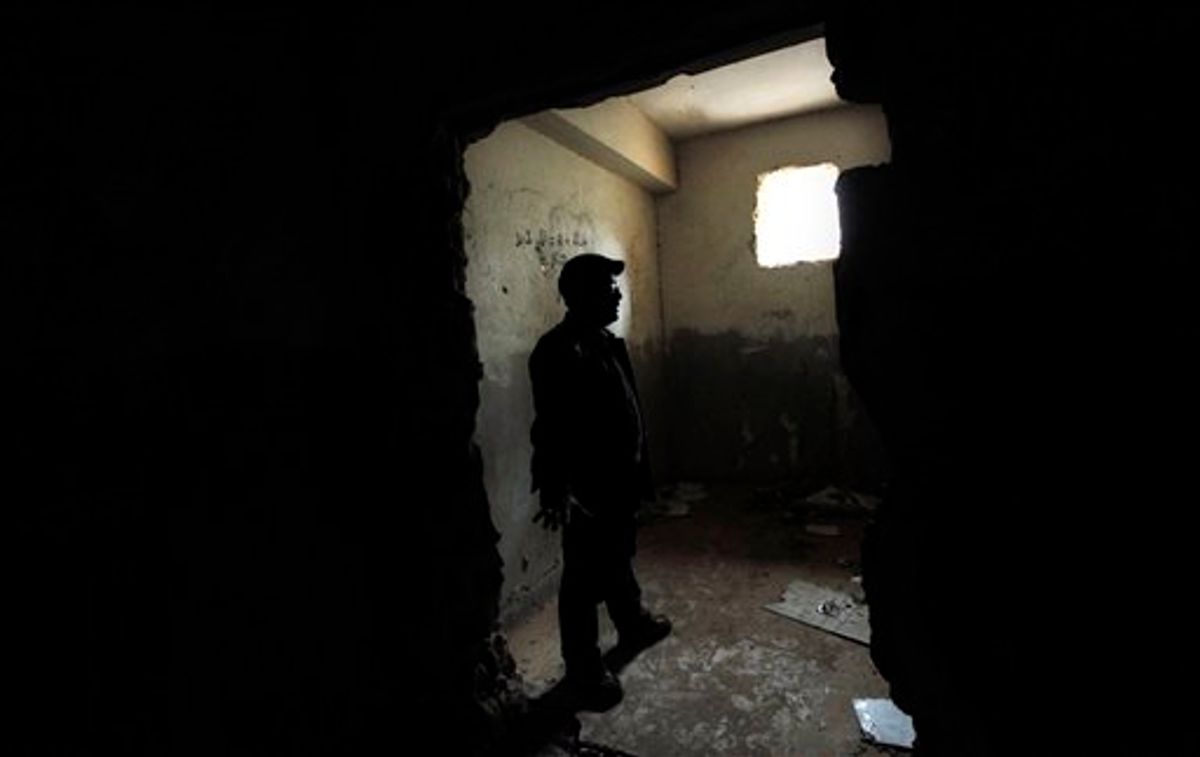 In this photo taken Tuesday, March 8, 2011, Libyan businessman Fadlallah Haroun, 45, who spent seven years in Moammar Gadhafi's prisons without being charged, stands in a cell at a stormed security base in the city of Benghazi, the Katiba building, where he spent 14 days before being transferred to Abu Selim prison in Tripoli, Libya. Now that eastern Libya has ripped itself free from Gadhafi's grip, residents there finally feel safe to talk about what life was like under the regime. The stories they tell are stamped with the terror, paranoia and sinking sense of desperation instilled in the people by Gadhafi since he took power in a 1969 coup. (AP Photo/Nasser Nasser) (AP)
--

Three British Broadcasting Corp. staff were detained, beaten and subjected to mock executions by pro-regime soldiers in Libya while attempting to reach the western city of Zawiya, the broadcaster said Wednesday.

The news organization said the crew, members of a BBC Arabic team, were detained on Monday by Moammar Gadhafi loyalists at a check point about 6 miles (10 kilometers) south of Zawiya.

Chris Cobb-Smith, a British journalist and part of the crew, said the group were moved between several locations, in some cases alongside civilian captives who had visible injuries from heavy beatings.

On Tuesday, the crew were driven to a building in Tripoli which they believed was the headquarters of Libya's overseas intelligence service. The men were told to bow their heads and line along a wall by soldiers.

"A man with a small submachine gun was putting it to the nape of everyone's neck in turn. He pointed the barrel at each of us. When he got to me at the end of the line, he pulled the trigger twice. The shots went past my ear," Cobb-Smith said.

The BBC said the men were held for 21 hours before they were released, and have since left Libya. It reported the details of their detention in bulletins late on Wednesday.

Liliane Landor, an executive at BBC Global News, said the organization would continue to cover the conflict in Libya, despite the attack on its staff. "The BBC strongly condemns this abusive treatment of our journalists and calls on the Libyan government to ensure all media are able to report freely and are protected from persecution," she said.

Feras Killani, another of the crew, said in one location he was forced to his knees while a guard cocked a gun in a mock execution. "I thought they were going to shoot me," he told the BBC.

Killani said he was accused of being a British spy, abused for his Palestinian heritage and beaten by guards. One captor struck him "with his fist, then boots, then knees. Then he found a plastic pipe on the ground and beat me with that. Then one of the soldiers gave him a long stick."

Cameraman Goktay Koraltan, who is Turkish, said he feared for the crew lives. "I thought they would shoot us, I could hear guns loading. I was scared to death I thought it was the execution moment," he said.

Killani said four other men being held in one facility told him they had been without food for three days and had been repeatedly tortured. Others had visible signs of abuse, including broken ribs, he said.