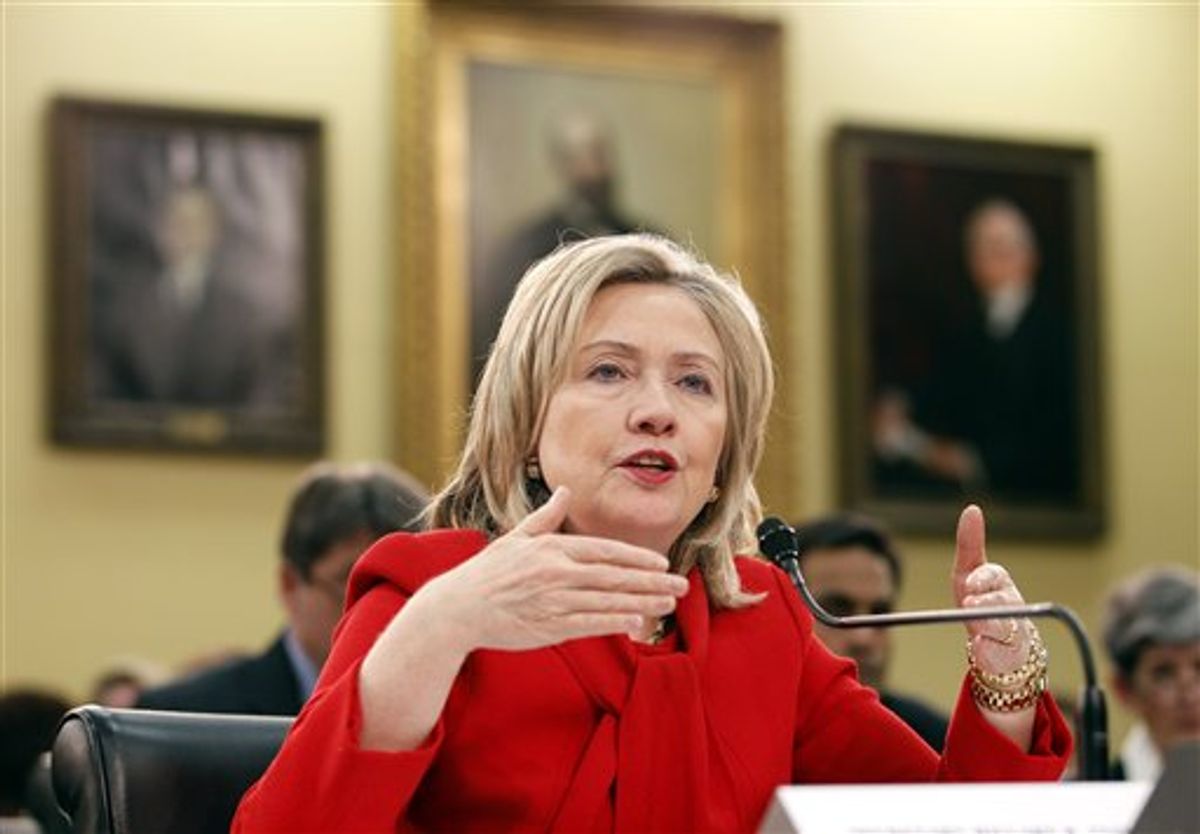 The Obama administration is steering away from unilateral military action against Moammar Gadhafi's regime, warning that a go-it-alone approach could have unforeseeable and devastating consequences.

Secretary of State Hillary Rodham Clinton told a congressional panel that international authorization is critical for any U.S. military pressure on Gadhafi to leave power.

She spoke as the U.S. and its allies discussed a possible no-fly zone over Libya and other options.

Clinton noted Thursday that no-fly zones had limited effect against Slobodan Milosevic during the Balkan wars and on Saddam Hussein in Iraq.

Speaking of international efforts, Clinton said "it's easy for people to say 'Do this, do that,' and then they turn and say: 'OK, U.S., go do it.'"

But she said that would mean the U.S. suffers the consequences "if something bad happens."

Secretary of State Hillary Rodham Clinton will travel to Egypt and Tunisia next week to press democratic reforms after rebellions that ousted the two countries' autocratic rulers. She will also meet members of Libya's opposition who are fighting to topple Moammar Gadhafi, and announced Thursday that the U.S. was suspending relations with the Libyan embassy in Washington.

Clinton will be the first cabinet-level Obama administration official to visit either Egypt or Tunisia since unrest exploded across the Middle East in January. Her trip to Cairo and Tunis comes as the U.S. tries to maintain its influence in the region as well as reassure its Arab allies of continued support amid rapidly changing developments on the ground.

Clinton said she'll also meet Libyan opposition figures in the U.S. and when she travels to Egypt and Tunisia. The U.S. has confirmed talks with groups organizing in Libya's east, which has been largely wrested from Gadhafi's control, but Clinton's will be the highest-level discussions with figures fighting for an end to the Libyan leader's 42-year grip on power.

The U.S. is cutting relations with Gadhafi's remaining representatives in Washington.

"We are suspending our relationship with the existing Libyan embassy," Clinton told a congressional panel. "So we expect them to end operating as the embassy of Libya."