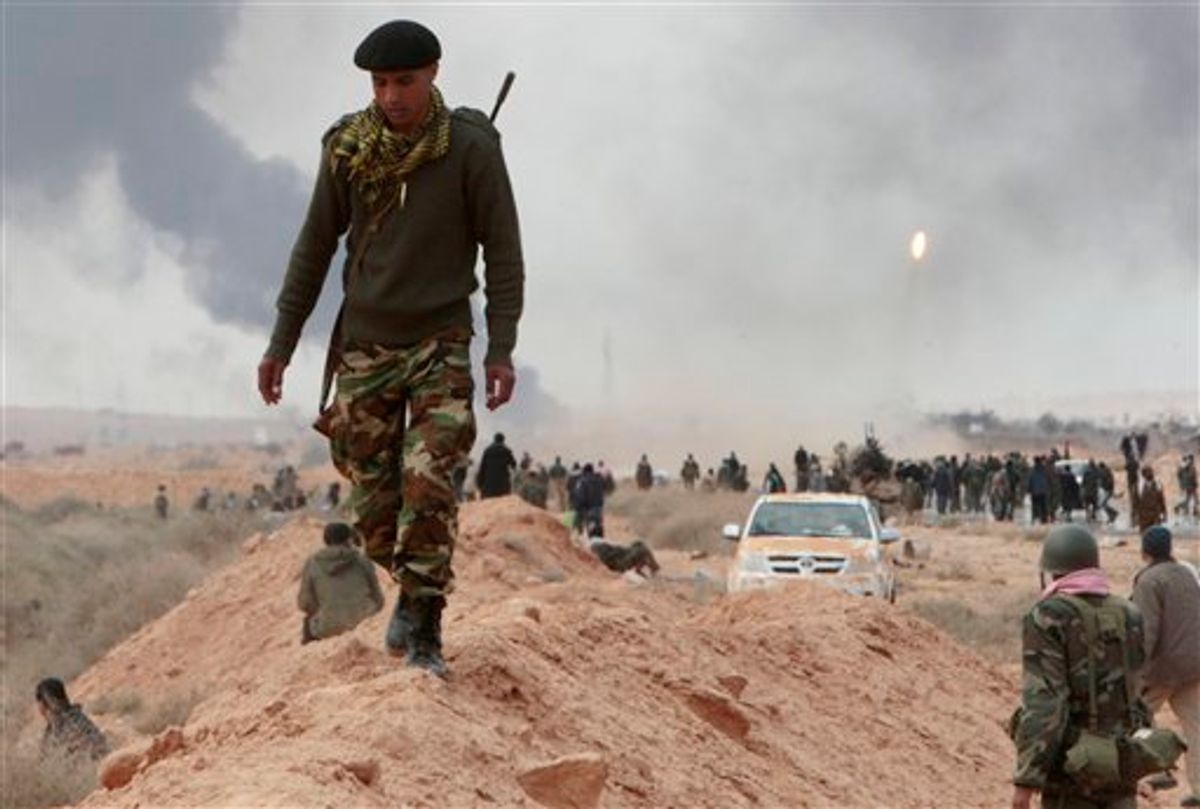 An anti-Gadhafi rebel, walks along a sand barrier, as other rebels fire a rocket launcher seen in the right, during fighting against pro-Gadhafi fighters, in Sedra, eastern Libya, Wednesday March 9, 2011. A high-ranking member of the Libyan military flew to Cairo on Wednesday with a message for Egyptian army officials from Moammar Gadhafi, whose troops pounded opposition forces with artillery barrages and gunfire in at least two major cities. Gadhafi appeared to be keeping up the momentum he has seized in recent days in his fight against rebels trying to move on the capital, Tripoli, from territory they hold in eastern Libya. (AP Photo/Hussein Malla) (AP)
--

Government forces drove hundreds of rebels from a strategic oil port with a withering rain of rockets and tank shells on Thursday, significantly expanding Moammar Gadhafi's control of Libya as Western nations struggled to find a way to stop him.

France became the first country to recognize the rebels' governing council, and an ally of President Nicolas Sarkozy said his government was planning "targeted operations" to defend civilians if the international community approves.

U.S. Secretary of State Hillary Rodham Clinton said she would meet with opposition leaders in the U.S., Egypt and Tunisia.

But there was no concrete sign of Western moves toward military assistance such as the no-fly zone that the rebels pleaded for as they retreated through the pancake-flat desert scrubland outside the port of Ras Lanouf, scanning the skies for government warplanes.

The fleeing rebels said government forces showered rockets or tank shells on Ras Lanouf in preparation for a full-scale advance. Lightly armed opposition members sped back to their territory by the hundreds, fleeing eastward in cars and pickup trucks mounted with machine guns.

A rebel official in the town of Ajdabiya inside opposition territory said Gadhafi's troops and tanks were battling the insurgents at the western entrance to Ras Lanouf and using gunboats to fire on the rebels from the sea.

"These are tough battles," said Akram al-Zwei, a member of the post-uprising town committee. "We are fighting against four battalions heavily equipped with airpower, tanks, missiles, everything."

He added that the rebels are fighting alongside the Saaiqa 36 Battalion, which had been based in Benghazi but defected to the opposition.

Taking back Ras Lanouf would be a major victory for Gadhafi, reestablishing his power over a badly damaged but vital oil facility and pushing his zone of control further along the main coastal highway running from rebel territory to the capital, Tripoli.

The rebel hospital in the eastern town of Brega said four were confirmed dead in the fighting, 35 were wounded and 65 were missing.

The international Red Cross said dozens of civilians have been wounded or killed in recent days in grueling battles between Gadhafi's army and the opposition.

"We need help from the international community, but we just hear promises," said Mohammed Ali Al Zuaiee, a 48-year-old rebel fighter. "They are doing nothing."

Shells hit a series of buildings as Gadhafi's tanks moved further along the coast road than they have been since the rebels seized most of the country's east.

The main hospital in Ras Lanouf was hit by artillery or an airstrike and the rebels are pulling their staff out and evacuating patients to the towns of Brega and Ajdabiya, said Gebril Hewada, a doctor on the opposition's health committee in the main eastern city of Benghazi. He said no staffers were hurt but he didn't know about patients.

The retreat was a major setback on a day of rebel victory on the diplomatic front. France became the first country to formally recognize the rebels' newly created Interim Governing Council, saying it planned to exchange ambassadors after President Nicolas Sarkozy met with two representatives of the group based in the eastern Libyan city of Benghazi.

"It breaks the ice," said Mustafa Gheriani, an opposition spokesman. "We expect Italy to do it, and we expect England to do it."

French activist-intellectual Bernard Henri-Levy sat in the meeting and said France was planning "targeted operations" to defend civilians if the interim council demands them and the international community approves. Henri-Levy did not elaborate and the French government declined to comment, so it was not clear if Henri-Levy was describing a new, more aggressive plan for intervention.

NATO has said it is planning a no-fly zone but would only act with the approval of the UN Security Council, which diplomats say would hinge on the OK of African and Arab countries. Britain and France have backed the rebels' calls for a no-fly zone, but the Obama adminstration has expressed deep reservations about involvement in another conflict in the greater Middle East.

NATO said it had started round-the-clock surveillance of the air space over Libya, and British Foreign Secretary William Hague said a meeting of EU foreign ministers would discuss how to isolate the regime.

Germany said it froze billions in assets of the Libyan Central Bank and other state-run agencies. The U.S., UK, Switzerland, Austria and other countries have also frozen Gadhafi's assets.

"The brutal suppression of the Libyan freedom movement can now no longer be financed from funds that are in German banks," Economy Minister Rainer Bruederle said.

The Libyan government tried to stave off tough action, sending envoys to Egypt, Portugal and Greece.

In the west, Gadhafi claimed victory in recapturing Zawiya, the city closest to the capital that had fallen into opposition hands. Western journalists based in Tripoli were taken late Wednesday to a stadium on the outskirts of Zawiya that was filled with Gadhafi loyalists waving green flags and launching fireworks. Libyan TV cameras filmed the celebrations as food, drinks and cooking oil were distributed.

Government escorts refused journalists' requests to visit the city's main square.; phone lines there have not been working during a deadly, six-day siege.

Red Cross President Jakob Kellenberger said local doctors over the past few days saw a sharp increase in casualties arriving at hospitals in Ajdabiya, in the rebel-held east, and Misrata, in government territory.

Both places saw heavy fighting and air strikes, he said.

Kellenberger said 40 patients were treated for serious injuries in Misrata and 22 dead were taken there.

He said the Red Cross surgical team in Ajdabiya operated on 55 wounded over the past week and "civilians are bearing the brunt of the violence."

He said the aid organization is cut off from access in western areas including Tripoli but believes those are "even more severely affected by the fighting" than eastern rebel-held territories.

A Brazilian newspaper reported Thursday that a correspondent who has been missing in Libya for a week has been jailed somewhere west of Tripoli.

There was no word, however, on the whereabouts of a correspondent for Britain's Guardian newspaper who was traveling with the Brazilian.

The report on the website of the O Estado de S. Paulo newspaper did not say how it had learned that reporter Andrei Netto was jailed, nor did it say if the Guardian's Ghaith Abdul-Ahad was with him.

The paper reported it lost direct contact a week ago with Netto, who was traveling with Abdul-Ahad, and noted that Brazil's government was working for his release.

The British Broadcasting Corp. staff said three of its staff were detained, beaten and subjected to mock executions by pro-regime soldiers in Libya while attempting to reach the western city of Zawiya.

The news organization said the crew, members of a BBC Arabic team, were detained on Monday by Moammar Gadhafi loyalists at a check point about 6 miles (10 kilometers) south of Zawiya.

Chris Cobb-Smith, a British journalist and part of the crew, said the group were moved between several locations, in some cases alongside civilian captives who had visible injuries from heavy beatings.

Zeina Karam in Cairo, John Heilprin in Geneva, Elaine Ganley in Paris, Don Melvin in Brussels and Alan Clendenning in Madrid contributed to this report.